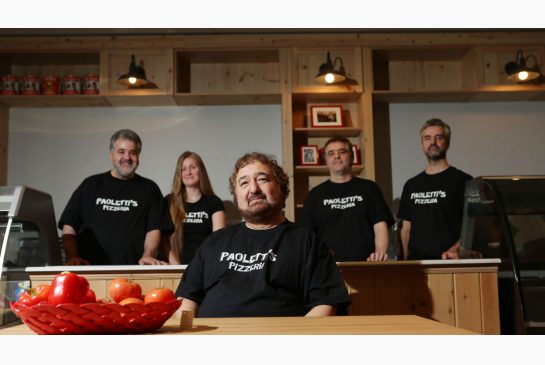 He promised them a war — and now the battle of the Canadian pizzerias is on! Dante Paoletti, pictured at left, was let go by the new owners of the pizzeria he and his family founded in Vaughan, Ontario, north of Toronto. The former manager of  Dante's Pizza VIno Pasta vowed revenge.

The old location is across Dufferin St., at Dante’s Pizza Vino Pasta, the successor shop to the business Paoletti and his family founded in 1976. Last March, Paoletti was let go as manager of his old restaurant by the company that bought it out of receivership and opened its current Vaughan location in 2009. At the time, in an interview with the Star, Paoletti characterized his ouster as a betrayal, and vowed to return with a new pizza joint next door to his former location.

Read more about Pizza wars north of the border.