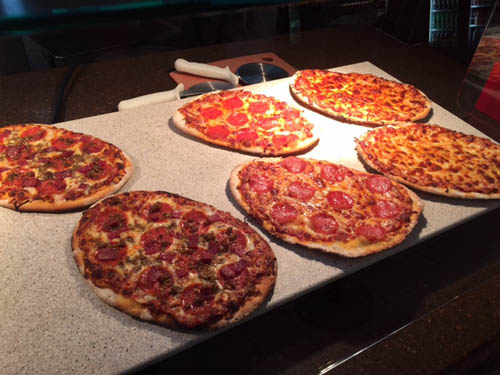 From its famed “Egyptian Lounge” location on Mockingbird Lane, the legendary Campisi’s restaurant has been serving students, faculty and alumni of Southern Methodist University for nearly 70 years. Starting Jan. 16, it will be even easier to enjoy their signature pizza and pasta when Campisi’s opens in the Hughes-Trigg Student Center on the SMU campus.

The newest Campisi’s – its 10th overall across North Texas – will offer a limited menu but the same homemade, handcrafted pastas and pizzas served up in its other restaurants. The on-campus location will have two pasta sauté stations and will offer four different individual-sized pizza options.

A Dallas institution since its founding in 1946 – when it was credited with introducing pizza to Texas – the family-owned chain is now run by David Campisi, a member of the fourth generation.

“There probably wouldn’t be a Campisi’s if not for the support and loyalty of the SMU community,” said Campisi. “Bringing our first on-campus location to The Hilltop is not so much a business decision as it is an emotional one. SMU has been very good to us since our founding, and we’ve strived to give back ever since.”

Campisi noted that the Student Center location will not operate, or look like, a traditional college pizza concession. Rather, the restaurant will be highly visual, with the cooking area on full display so customers can see their pizzas and pastas prepared in front of them.

“My history with SMU goes back to being a ballboy during the Dave Bliss and Ron Meyer eras, and attending basketball camps at the school,” continued Campisi. “We’ve served our pizzas at Moody Coliseum and Ford Stadium, and now we’re finally coming to the heart of campus. This is a really proud moment for me personally, and I hope the students and faculty will be pleased to see us there.”

The newest Campisi’s will officially open at the Hughes-Trigg Student Center for lunch at 10:00 a.m. on Friday, Jan. 16. Regular hours of operation are daily from 10:00 a.m. to 7:30 p.m. For more information, visit Campisis.us.

Founded in 1946 by Carlo “Papa” Campisi, an immigrant from Sicily, Campisi’s is credited with introducing “pizza pies” to Dallas and the state of Texas. A Dallas institution best known for its trademark “Egyptian Lounge” location on Mockingbird Lane, Campisi’s is owned and operated by David Campisi, great-grandson of Papa. The chain, which now numbers 10 locations, has won numerous local and national awards, including Best Pizza, Best Italian and Bon Appetite Magazine’s “One of the Best Pizzerias in America.”