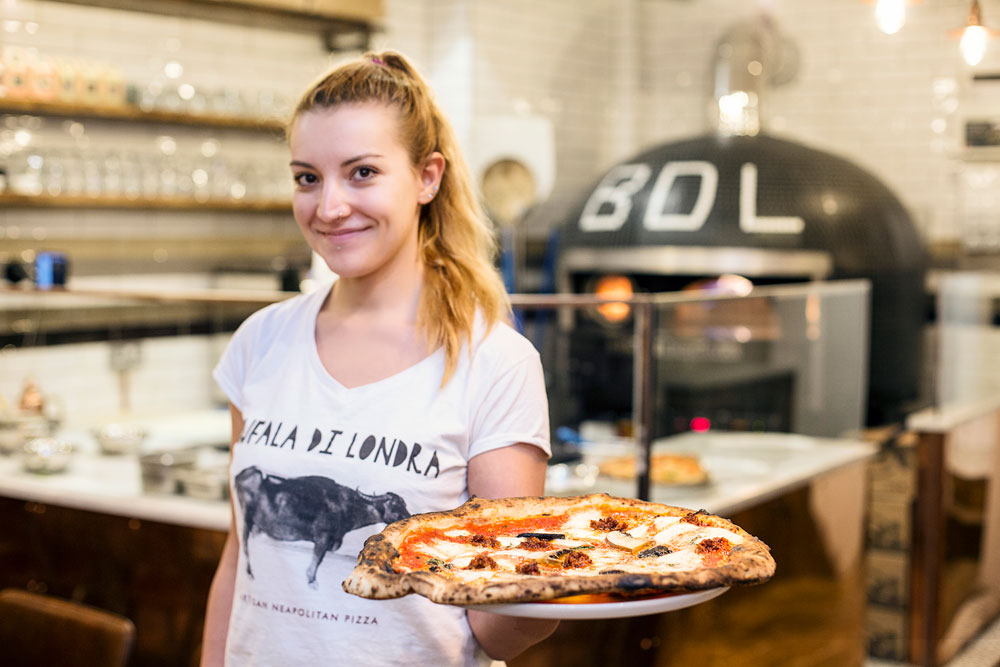 Bufala di Londra educates its customers on how to identify an authentic Neapolitan pizza. Sparse toppings, a slightly wet center and a soft crust with a variable degree of charring add up to the perfect pie, according to the pizzeria’s website.

Rising prices, a shortage of housing, and the decision to break from the European Union are some of the biggest concerns in the United Kingdom today. As cities have gotten more crowded, competition in foodservice has gotten fiercer. Even the chains are hitting a rough spot; today’s trends in England reflect a bustling population that wants food with quality ingredients at a price that still lets them pay their soaring rent.

Ash Nouri, owner of Pizza Point in Birmingham, U.K., has been keeping a close eye on the trends for a while now. Looking for new opportunities in the early 2000s, he moved to the U.K. after graduating from his university in Iran. When he learned his degree was not recognized in England, he looked to the Persian community for help. “I decided to open a pizzeria, because that’s what you did if you were from Iran,” he says.

“We’ve been here for about 15 years now,” Nouri adds. “Since we opened, lots of competition came here; about 10 to 15 more food shops opened down the street. Since the competition has increased, inflation and prices have gone up, cost of energy, materials, rent rates, everything—this has killed our profit.”

Due to the stiff competition, Nouri hasn’t raised his prices in 10 years. “You can’t change the price if they are selling pizza for 99 pence down the street,” he says. “How can you set your price higher than this? Even if you have quality, sometimes people are stuck because they have no money.”

Although Brits love artisan pizza as much as anyone else, the need to keep it cheap makes it harder to source quality ingredients from small organic farms. For some operations, the solution is higher volume, moving customers in and out faster. “The biggest rise we have seen is in the artisan, sourdough and Neapolitan-style pizzerias, such as small independents offering great quality and pricing,” says Clive White of U.K.-based White’s Foodservice Equipment. “They are happy to have 30 to 50 seats and turn the tables very quickly.” To speed things along, some have switched from the traditional wood-burning oven to rotating stone decks, which require less training and attention.

A London pizza chain called Franco Manca is a leader in the quick-turnover model today. A step up from your average fast-casual eatery, Franco Manca serves Neapolitan-style pizza with a sourdough starter that dates back to the 1700s. Most ingredients are sourced from small farms, homemade, or sometimes even foraged in the wild by the pizza makers themselves. This approach to sourcing weaves love and storytelling opportunities into each pie. “In 2019, Franco Manca will grow from a mainly London-based chain (with 50 stores) to a national chain, with openings planned in major cities across the country,” White says. Other Neapolitan pizzerias popping up on the British scene include Mozza and Bufala di Londra.

Want to discover U.K. pizza firsthand? Join PMQ and the U.S. Pizza Team at the 4th annual European Pizza Championship, held November 13 to 15 in London. The show features VIP guests and speakers from across the culinary world, including Tony Gemignani. Contact missy@pmq.com for information on travel and accommodation booking. More information can be found at pizzapastashow.com.

What will the future hold for foodservice in the U.K.? Even after voting itself out of the EU in the Brexit movement, no one is sure exactly how or when the U.K. will officially take its leave. Jim Winship, director of the Pizza and Pasta Association in the U.K., says the biggest problems caused by Brexit are the economic uncertainties and difficulties in recruiting staff. “Many of our food businesses rely substantially on recruiting employees from the EU,” Winship says. “Currently, we estimate over 70% of those working in foodservice businesses in London come from the EU, and the figure is about 40% across the U.K. as a whole. With full employment in the U.K. at the moment, we need these workers, but our government is determined to cut immigration by reducing the quotas of people allowed in to work. This is a big worry for many food businesses.”

As the U.K. adapts to an ever-changing economic climate, so does the pizza business. New pizza concepts that employ foolproof ovens and quick table turnover are coping with higher prices and the lack of labor, and some older neighborhood pizzerias like Pizza Point are just scraping by. It remains to be seen if things will get better or worse with Brexit.