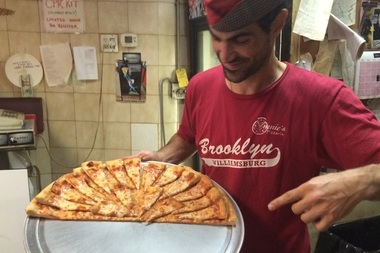 Bacon-wrapped pizza, hot dogs stuffed in pizza crust–why not pizza topped with more pizza? That's the ticket at Vinnie's Pizzeria in New York that was punched last weekend to the tune of 300-400 slices with mini-slices on top  .

Dnainfo.com says Vinnie's Pizzeria, at 148 Bedford Ave. and 253 Nassau Ave., sold hundreds of slices of its pizza topped with mini-slices of pizza over the weekend — with people even coming in from out of state to try the viral sensation. Employee Sean Berthiaume came up with the idea that more is better and it took off on the Internet last week. Now the pizzeria has decided to make the pizza-on-pizza the specialty offering. By June 1, Vinnie's Williamsburg and Greenpoint locations had sold more than a dozen whole pies and between 300 and 400 slices, each with four to five mini-slices on top. Cementing his candidacy for employee of the month, Berthiaume said, "It was kind of meant for my own amusement to begin with. I was just fooling around at work, just trying something. It feels good that it actually paid off." Each slice costs $4, while a whole pie costs $25.

Read more about why more is more when it comes to pizza.