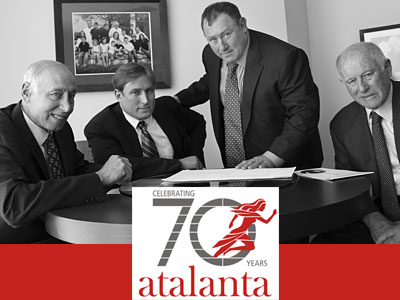 Atalanta Corporation, a food importer specializing in cheese, charcuterie, grocery and seafood products, will
celebrate its 70th year as a third-generation family-operated business in early 2015.

Atalanta’s success in the food industry began in 1945 importing Polish hams. The late Leon Rubin and Herbert Moeller
incorporated Atalanta Trading Company in New York City looking to fill the void in the U.S. domestic food importing market.
Much of Atalanta's early success was centered on key relations with the international community that garnered exclusive contracts with the imported meats and cheese markets. In 1970, the company rebranded into what is now Atalanta Corporation and in the late 1980s, its continued expansion in both product diversity and personnel prompted a move to its current headquarters in Elizabeth, New Jersey.

To ensure that the business continues to thrive, Atalanta places resilience and adaptability at the forefront of their business model while continuing to build strong relations with both customers and suppliers. George reflected on Atalanta’s growth: “We started as a company that imported Polish hams and seafood, even beef and wood products, and we’ve diversified to thousands of products over the years.” George’s son Thomas, current vice president of Atalanta, follows: “Seventy years is significant. To hit this milestone means we have been able to adapt as business demanded. We have had to have flexibility and strength to navigate the ups and downs over these seven decades. Few family businesses have been able to achieve this. We have had hundreds of hardworking, dedicated employees that have helped us get here. Loyal customers, supportive suppliers have all contributed to our success.”