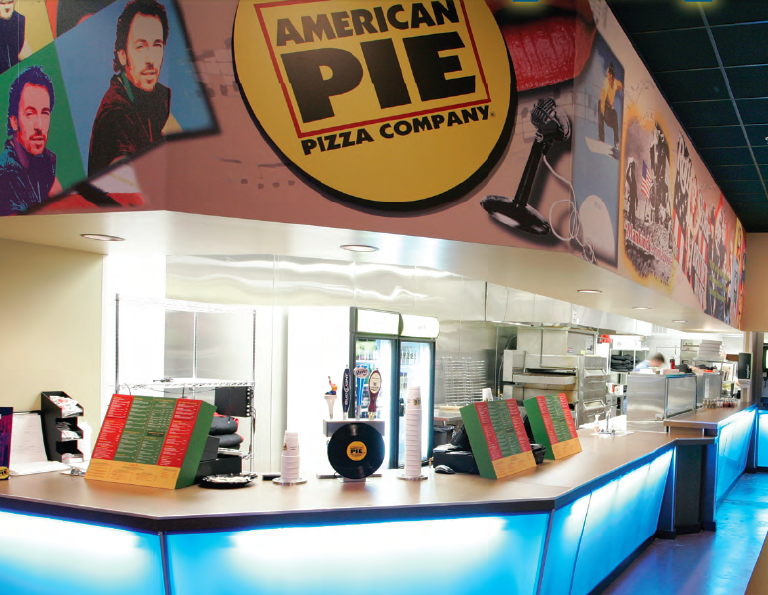 In 2002, two former smoothie-chain franchise owners came together with one common goal: to open a quick-casual restaurant that would offer the highest-quality food representing the greatest cities in America—New York pizza, Memphis pulled pork, Philly cheesesteak and more. Corey Balzer and Geoff Gaskin took this unique business strategy, teamed it with great music, and American Pie Pizza Company was born.

Now, five years later, with 12 franchise stores under their belts and more on the way, the owners welcome guests to step through the doors of any American Pie Pizza Company in Florida to experience the restaurant that was once only a concept in a business plan, and taste from the menu that they always dreamed of sharing with their guests.

Everybody Have Fun Tonight

American Pie has won numerous accolades in the past year, including “Best New York Pizza in Orlando” by the Orlando Sentinel, Citysearch and Orlando Weekly. The recent recognition from press and locals comes as no surprise to Balzer. “The fi rst store we opened in 2002 was a little 1,200-square-foot dive,” he says. “But we slowly expanded the restaurant and started doing a lot of marketing to our customers. It literally doubled our business!” Balzer says that word of mouth has helped propel the business, resulting in customers who used to come in twice per month now visiting four times per month—and bringing friends with them. “The 100% increase in business is really exciting,” he says.

To help entice customers to return, Balzer and Gaskin have several marketing schemes in place. Through all of their efforts, they try to target the restaurant’s main 18 to 39 age group demographic.

Mondays have every kid in town asking their parents to take them to “Kid’s Play-Dough” night at American Pie. The restaurant gives youngsters the opportunity to make their own pizzas at the table before their personal creations take a trip to the oven for baking. 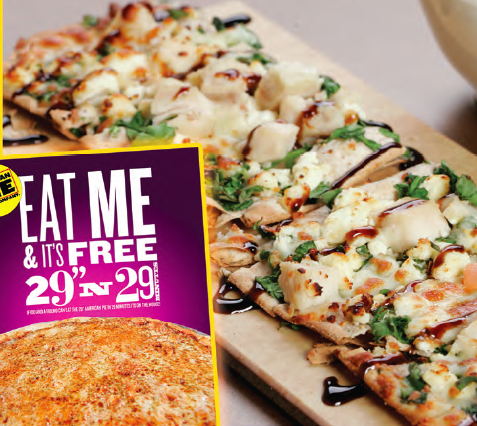 Tuesdays and Thursdays serve as donation nights, and schools are encouraged to bring in a group to raise money for their teams or charities. A percentage of the sales from the night go directly to the school the next day. “This is a great fundraising idea for the schools, and a great community-builder and advertising outlet for us,” says Balzer.

Nickel Beer Wednesdays keep every American Pie packed on what’s usually one of the slowest nights of the week for pizzerias, and on weekends the locations overflow as guests file in to watch NFL games (each table has its own plasma screen TV).

Many hungry patrons can’t resist trying to win the restaurant’s 29” pizza by pairing up with a partner in gluttony and attempting to finish the colossal pie in less than 29 minutes. Balzer reveals that the winners’ list is pretty short, but that doesn’t stop people from bellying up to the challenge.

On top of these sweeteners, probably one of the biggest draws of American Pie is the personal PlayStation game console at every table. Customers can play against those at their own table or against neighboring diners. Balzer says that all customers—both young and old—get into playing the games, resulting in more time at the restaurant and, subsequently, higher food tabs. 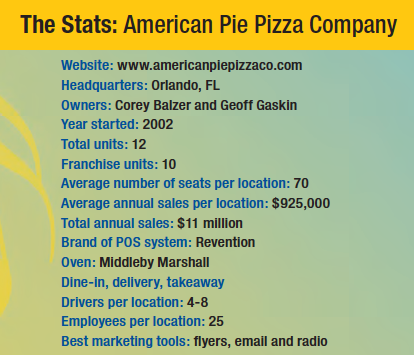 No one leaves American Pie hungry. The restaurant caters to the health-conscious crowd with items like the Diva’s Flatbread (chicken, feta, spinach, mozzarella and balsamic), while those not watching their calorie count can indulge in garlic knots, sweet potato fries, Goop Dogs (a sloppy joe hybrid), cheesy calzones and New York-style pizza. Even vegetarians can pull up a seat for veggie variations of the restaurant’s pitas, calzones and pizzas.

“When we first opened, the business was doing about 65% pizza; now, pizza brings in around 45% of the profi ts, with the rest of our menu items vying for top position,” says Balzer. “Our whole wheat flatbreads are less than 500 calories each and extremely popular, especially with the female crowd.”

The owners of American Pie are most proud of their menu items that use recipes and/or ingredients from around the country; these include the Pulled Porkettes, Philly 4 Cheese Steak and New York-style pizza. “I tend to agree with folks who believe that the water in New York makes the dough taste better,” says Balzer. “That’s why we import our dough from the Northeast.” In addition to importing dough, they also bring in cheese from Wisconsin, cheesesteak from Philadelphia and pulled pork from The SmokeHouse in Memphis to give their customers truly regional flavors.

Having grown up in New York, Balzer has been making pizza and pasta since he was 15, so he brings his own family sauce recipes to the mix for the pizzas, calzones, spaghetti and The Meat TaBall! sandwich.

Balzer and Gaskin have followed the debate about trans fats in the last couple of years and say that American Pie never had to make any changes to its menu. “We’ve been trans-fat-free from day one,” says Balzer. “It’s something we never even considered adding to our food. We believe that great food can also be healthy food.”

Some pizzerias struggle when trying to figure out the best ways to grab the attention of, and promote to, existing customers. Balzer and Gaskin think they’ve finally found a couple of programs that work. “We use the loyalty program through Revention POS Solutions to consistently mail out a thank-you note and a coupon for one free item to each of the existing customers in our system,” says Balzer. “Our coupons always give the customer something for free. They don’t need to purchase anything, which I believe brings in more people than a coupon that requires a purchase.”

Add to the loyalty program the recent rollout of online ordering through its POS, and American Pie will now be able to collect additional customer data and increase store revenue across the board. “Since nearly all of our guests are Internet-savvy, adding online ordering into the mix was a must,” says Balzer. “We’re currently marketing it in-store and over the phone but have also hired an Internet marketing firm to help align us with our audience and drive traffic to the websites.” Balzer says they’ve already seen an increase in sales after only a couple of weeks.

Working for the Weekend

The American Pie staff mirrors the restaurant’s fun, high-tech, forward-thinking atmosphere. “We’ve had great success in attracting and retaining top-notch employees,” says Balzer. “They even bring their friends to work with us.”

An employee bonus program that kicks in after 90 days of employment is a great incentive offered at American Pie to help lessen turnover. “If we hit our sales goals for the month, each employee gets the bonus,” says Balzer. “It’s divided up by the amount of hours each employee works for the month, and ranges from $5 to $250 per month. It’s a big deal, because everyone has a goal and feels included in our success.”

In lieu of servers and hosts, American Pie employs what they call “ambassadors” to help attend to hungry guests. These employees have one goal and one goal only: Make sure the guests don’t get up! “Our business culture is built on friendship, and we train all of our employees to appreciate everyone’s individuality, which spills over to guest service,” says Balzer. Ambassadors make their rounds throughout every meal, taking orders for additional food, beverages and desserts, and checking on guests. “It’s a secondary service that helps to differentiate us, as well as bring in additional revenue,” he says. “Our guests appreciate the difference.”

Only three years after breaking ground on the fi rst American Pie franchise store, Balzer says that each of the 12 locations that are currently open already bring in double the profits of the average pizzeria.

“There’s a lot of interest in the American Pie franchise,” says Balzer. “But we want to make sure that all our sales targets are being met with every store and that there’s constant growth.” When speaking with prospective franchisees, Balzer and Gaskin seek passionate people who love food and have a keen sense of customer service. “It’s not just about a financial commitment,” says Balzer. “Franchisees need to have a strong work ethic and be hands-on.”

Balzer likens franchising to having multiple children. “If you already have a child, you’d think that having another one would be twice as hard,” he says. “But it isn’t; it just takes a great infrastructure to support each new business and a system that breeds consistency. We have franchise consultants for each five stores and have owner/manager meetings monthly. Our success depends on the success of our partners; as you grow, this is the biggest challenge.”

Currently, 50 American Pie Pizza Company restaurants are in the build-out process, with 12 franchisees handling 3 to 4 stores each and a large developer opening a group of stores on the west coast of Florida. “Once we reach our 33-store mark, we’ll look at what we can do outside the Central Florida corridor,” says Balzer. “We’re interested in New York, North Carolina, Tennessee and Miami.” So far, they owe all of the franchise growth to word-of-mouth advertising, and Balzer says they’re ready to open additional stores. But, before moving forward, they insist on making sure the business’s infrastructure is prepared for the growth.