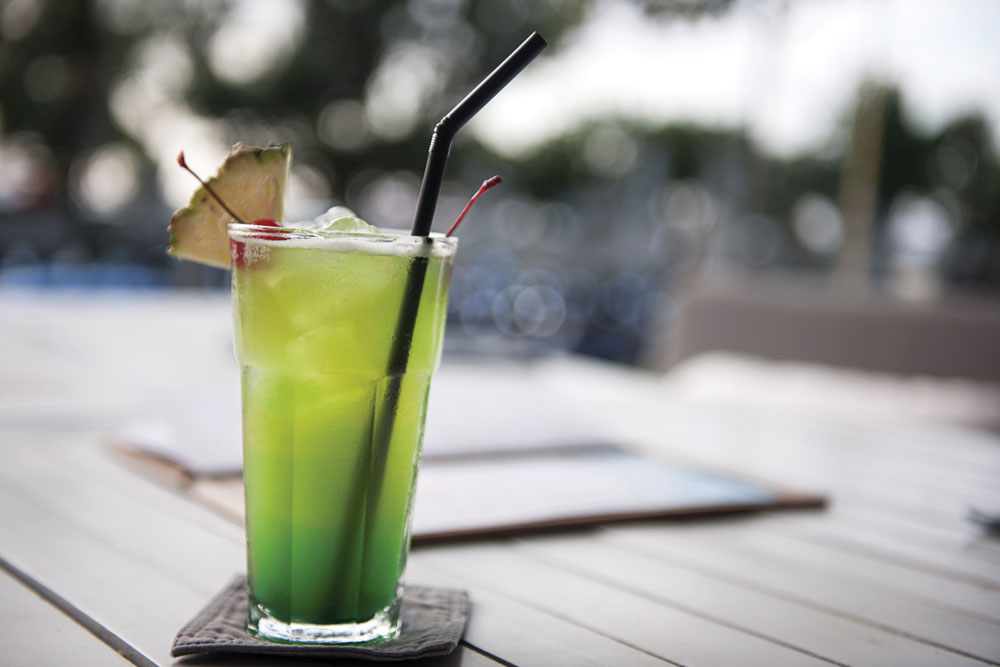 On the heels of the craft beer explosion, alternative alcoholic beverages—think hard ciders, teas and lemonades—are enjoying their time in the sun. With new flavors and brands constantly popping up, this category offers something for everyone, and they can prove a welcome addition to any pizzeria’s menu.

“We’re entering a golden age for cider and other hard beverages,” notes Daniel Levine, director of Avant-Guide Institute, a New York-based trends consultancy. “It’s an outgrowth of the craft brewing movement. With small-batch beverage producers leading the trend, growth has happened very quickly for these beverages in the last few years.”

For customers who crave a beverage off the beer and wine path, hard cider, tea and lemonade are attractive options—and today there are ever-increasing varieties available. “Across the board, consumers are demanding more variety and choice in their alcoholic beverages, so a fruit base is popular as consumers look for more refreshing options,” says Anup Shah, director of innovations for MillerCoors in Chicago. “This family of products, including apple or strawberry ales, is unique because it differentiates from the traditional beer profile. With natural fruit flavors and a crisp, clean finish, these ales honor the beer brewing tradition while providing an entirely new taste experience.”

These options often resonate with younger customers, experts say. David Cordtz, cidermaster and CEO of Sonoma Cider in Healdsburg, California, believes the recent explosion of alternative adult beverages, such as hard ciders, is largely due to Millennial interest in the category. “You may notice that the explosion of cider soon followed the craft beer movement, as most Millennials are taking a greater interest in craft products,” he explains. “Plus, today’s ciders are unlike hard ciders of the past. There is now a craft approach to production—as opposed to sugar bombs—and craft hard ciders today offer more complex, refreshing flavors.”

Sanjiv Gajiwala, senior director, marketing activation, at Mike’s Hard Lemonade in Chicago, affirms that his company’s target demographic is Millennial adults who are looking for “more flavorful” alcoholic refreshment. “They aren’t afraid to try new things, and an unconventional beer alternative gives them great natural taste and refreshment without a beer aftertaste,” he explains. “The flavor category is continuing to explode, and apple products—like cider and apple ale—are a huge part of that.” Gajiwala cites some stats: Sales of flavored malt beverages rose 40% in the last 18 months—including all apple products, which have almost doubled—leading to increased development of new flavors, both seasonal and regular, from a range of producers.

Woodchuck Hard Cider, based in Middlebury, Vermont, illustrates the craft cider boom; the company started in 1991 in a two-car garage and is now nationally distributed. “The explosion of this category is due to a couple of factors,” says Nate Formalarie, Woodchuck’s communications manager. “The craft beer boom has led to a consumer with a more curious palate than ever before, and people are more willing to try something new. We’re finding that innovative cider fits that type of consumer.”

Levine notes that interest in hard ciders, teas and lemonades tends to be strongest in urban areas—or anywhere craft beers are popular. “Many consumers are seeking local, natural, artisan products, but now even the big brands have gotten involved, making this category even more popular,” Levine says. “These drinks seem to be popular among both men and women for their sweetness, though some are dry. And now that craft beer has run its course, ciders especially are popping up as potentially the next big thing.”

Offering alternative alcoholic beverages with unique flavor profiles appeals to both wine and beer drinkers, who are increasingly developing more sophisticated palates, according to Cordtz. “There is a good bubbly quality to ciders, so those who love sparkling wine can find similarities in hard cider,” he notes. “Meanwhile, for beer drinkers, cider offers a lighter, more refreshing taste.”

With so many varieties of hard ciders, teas and lemonades cropping up lately, a pizzeria operator should carefully choose the types that fit best with his menu—from popular mass-produced options by mainstream brewers to upscale craft recipes from smaller artisan companies. Eleanor Leger, co-owner and president of Eden Ice Cider Company in Newport, Vermont, believes that cider should be made like wine—from the fermented juice of cider-variety apples, just as wine is made from the fermented juice of grapes. “The best ciders are full-flavored, dry and tannic,” she notes. “They go very well with food and can be still or sparkling.” She notes that this type often differs from mass-market hard ciders, which may be produced from apple concentrate and water, with added sugar, flavor and coloring, then carbonated. “Then there are flavored malt beverages, such as hard lemonade or apple ales, which are brewed from grain with added flavoring, sugar and carbonation,” Leger adds. “We try to educate people about the differences.”

Regardless of which brands or flavor profiles fit best with your customers’ tastes, cider offers additional advantages in the crowded alcohol market, notes Formalarie. Its typical drinker is split 50-50, male to female; and cider is gluten-free, which attracts yet another audience of drinkers. Indeed, many pizzerias with gluten-free pies find them ideal for this growing customer group. “Ciders have definitely gotten more popular, with a large following from the gluten-free crowd,” notes Frank Valentine, beverage and bar manager at ZigZag Pizza (cohnrestaurants.com/zigzagpizzapie) in Oceanside, California. “They’re perfect for pairing with our diverse array of gluten-free menu options.” He recommends that pizzeria owners looking to add alternative alcoholic beverages contact their vendors and try available brands to evaluate both their taste and whether they fit in with the pizzeria’s concept.

At URBN Coal Fired Pizza (urbnnorthpark.com) in San Diego, two ciders are offered to accommodate different tastes: One is sweeter, with larger bubbles and a beer-like mouthfeel, while another is tart, with smaller bubbles, like an “apple champagne,” according to head bartender Jason O’Bryan. “They’re quite different and cover both sides of the spectrum, but we sell equal amounts of both, and we’ve seen a tremendous explosion of interest in cider among those with gluten-free diets,” he says. “In one recent year, our pizzeria’s local craft cider even outsold our best-selling beer, in terms of dollars in revenue, which was a big surprise.”

O’Bryan’s suggestion for maximizing sales: Denote on your menu, when applicable, that your alternative alcoholic beverages are gluten-free; they’ll sell themselves to guests who are looking for those options.

“Ciders have definitely gotten more popular, with a large following from the gluten-free crowd. They’re perfect for pairing with our diverse array of gluten-free menu options.”
—Frank Valentine, ZigZag Pizza

Many experts point out that pizza pairs very well with hard cider, tea and lemonade. “Pizza and beer is a pretty great combo, but pizza and cider takes it to a new level,” opines Formalarie. “A double IPA with your pizza can be a little overwhelming, but cider is crisp, light and refreshing. Big beers can’t bring the balance to a couple slices of pizza that cider can.” Specifically, Formalarie believes that barbecue pizzas, as well as other spicier pies, pair perfectly with cider, which delivers relief from the heat of spicy toppings.

Valentine notes that pear cider matches well with the Light My Fire pizza at ZigZag—a spicy signature pie that features jalapeños, chipotle sour cream and mango habanero salsa. “The cider cuts the spice and adds a nice mellowness,” he explains. “I also like pairing apple-flavored ciders with white-sauce pies.”

Cordtz agrees that, like wine and beer, hard cider is a food-friendly beverage. “An apple-based cider pairs well with a fresh Hawaiian pizza,” he says. “A pear-infused cider works well with an arugula and goat cheese pizza, and bourbon-infused cider, with its smoky notes, would be nicely paired with a barbecue pizza.”

As far as profitability, Formalarie points out that craft alternative beverages offer solid margins, selling for a similar price to high-end craft beers—while spurring more female interest than beer might. “It’s also a bridging beverage between beer, wine and spirits,” he says. “All audiences cross over into cider more than other categories.” He adds that for pizzerias offering gluten-free crusts, craft cider becomes a perfect pairing that servers should always suggest. And remember, these customers are often willing to pay a premium price to accommodate their dietary needs.

Cordtz also believes that the profit margins for cider are as healthy as those for craft beer—but they also diversify your beverage menu and differentiate your pizzeria. “Adding a premium hard cider is worthwhile for profitability, but it also provides consumers with a beverage that satisfies their emerging needs,” he says. “Hard ciders are uncommonly food-friendly and a good way for restaurant owners to delight their customers and keep them coming back.”

Finally, thanks to their versatility, hard ciders, teas and lemonades can be used in food recipes or combined with alcohol or mixers to create unique signature beverages that stand out. “Cider works well as an ingredient in a variety of recipes,” Formalarie says. “For pizza, adding cider to an innovative sauce or adding a reduced-cider drizzle on a pizza brings a touch of fruit and sweetness to any pie.”

As a cocktail mixer, alternative alcoholic beverages are equally adaptable. For example, Cordtz recommends using cider to create an array of signature cocktails, such as a Maple Basil Ciderita, which combines cider, fresh basil, silver tequila, freshly pressed lime juice and maple syrup. And according to Formalarie, cider can be mixed with beer to create a Snakebite (half cider, half lager) or a Black Velvet (half cider, half stout). “It can also be mixed with spirits to create any number of cool cocktails—try adding a shot of Southern whiskey or a shot of spiced rum to a pint of cider,” he suggests. “The possibilities only grow from there. Whether as a mixer, an ingredient, a gluten-free option, or just for a refreshing sip after a bite of fresh pizza, these beverages can fill nearly any role!”