A Slice of Hope conjures up magic and the possibilities of a brighter future through pizza parties for the needy. - PMQ Pizza Magazine 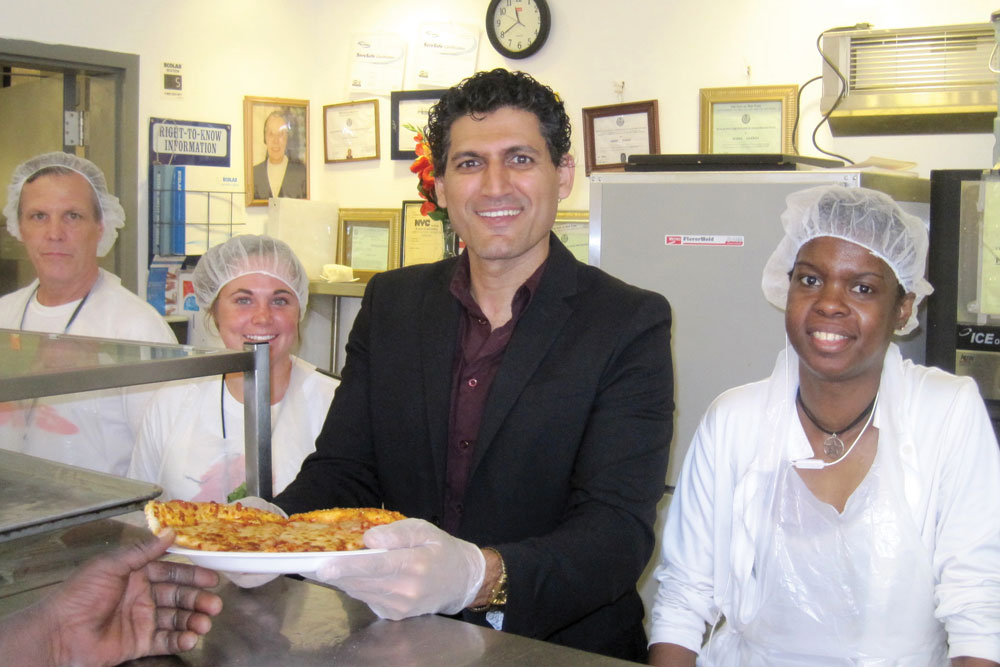 When Obaid Kadwani, founder of A Slice of Hope, looks into the eyes of a struggling homeless shelter resident at one of his organization’s pizza parties, he sees magic. Since Kadwani started the nonprofit organization eight years ago, his pizza-powered potion to counteract hunger and hopelessness has conjured up a quarter of a million slices of hope in 25 states, he says.

“This year, we’re expanding more than ever,” notes the Manhattan-based Kadwani, an Indian-American actor and host of Bollywood-focused TV shows on the Namaste America network, which has more than 1 million viewers. “Our mission is to create one real moment of joy for folks who are facing tremendous challenges and hardships. To accomplish this, we go into the shelters with pizza, music and friendship to promote healing and positive energy. People from all walks of life volunteer to organize these parties, which we call Parties of Hope. Our volunteers and donors give of themselves generously, and hundreds come to our events.”

Local independent and chain pizzerias alike often donate or offer discounted pizzas for the Party of Hope events, which will be held this year from August 17 to 22 in cities across the United States. (See sidebar for locations.) Additionally, Kadwani’s organization will launch Share a Slice of Hope, a weeklong restaurant industry initiative scheduled for July 20 to 26. The group is asking pizzerias and restaurants across the nation to collect donations to support A Slice of Hope or to donate a portion of their sales during that week to the cause. Donations will be used to help combat hunger in their local communities, with local volunteers giving out free slices to anyone who can’t afford to pay, and to support the nationwide effort.

Along with delicious pizza, pulse-raising live music helps to ignite a sensory explosion at each Party of Hope. “We fill the shelters with upbeat music, which inspires, moves and heals people,” Kadwani says. “When people are energized, they find the strength to combat life’s daily struggles. We commend the shelters and food banks across the country, as combating hunger and hopelessness is a daily, hourly, minute-by-minute reality.”

“[Pizzerias] are perfect conduits to the people who need help because they operate within the local community, offering a relatively low-priced source of nourishment that everyone loves.”
—Obaid Kadwani, A Slice of Hope

Fighting Hunger One Bite at a Time

Kadwani was 12 years old when his Indian parents immigrated to the States. Growing up poor in New York, he noticed that life on the rugged Bronx streets of the 1970s placed hope in short supply. “We had nothing, and the Bronx of that era wasn’t the safest neighborhood in America,” he recalls. “When I looked around, I realized everyone I knew was one paycheck away from disaster. I saw many of my classmates and their families fall off the ledge economically.”

Kadwani managed to escape, but he never lost his empathy with those who struggle to make ends meet. “When you’re not sure if you’re going to have a roof over your head or a meal on your table, the stress is incredible,” he says. “You don’t want to get out of bed. Think about what happens when these children of poverty grow up and start to have children of their own. Multiply that stress by 100. Add in the easy availability of drugs and alcohol, and it’s easy to understand why many folks in shelters feel their whole life is falling apart.”

Despite his hardscrabble upbringing, Kadwani went on to earn great personal success. He earned his college degree, acted with Oscar nominees like Paul Sorvino in feature films, and became a Bollywood star. As his fortunes climbed, he was determined to make the world a better place. He established A Slice of Hope in 2007 as a springboard to elevate his own personal crusade against hunger and despair. “A Slice of Life has changed my life, just as it has changed the lives of others,” he says. “I’ve learned that, if you empower people, you can make a change. One person can make a difference.”

Kadwani, a highly skilled communicator and passionate advocate for the economically disadvantaged, believes in fighting hunger one bite at a time. “You can’t solve everyone’s problems, but we can offer encouragement and bring a smile to someone,” he says. “A simple kind word, a gentle touch, a caring smile can make a person under stress want to fight on. We create a vehicle to energize one person in one moment on one day. We seek to inspire that person to understand how important they are to their family.”

A Slice of Hope begins contacting shelters each May to prepare for the Party of Hope pizza celebrations. “The people who organize and execute our parties are all grassroots volunteers,” Kadwani says. “Their goal is simply to create happiness and joy. The smiles you witness at one of these events reflect the definition of joy.”

A Slice of Hope aims to bring its program to at least one local food bank or shelter in every state this year. “Adding a shelter is an easy process, and we highly encourage people to contact our website to let us know about a shelter that would welcome a Party of Hope,” Kadwani says. “Once we’ve had a party at a shelter, we never drop that shelter, and we never reach out to a shelter without following up with a party.”

The organization welcomes collaboration with other charities, but Kadwani especially wants to partner with pizzerias. The next step in the organization’s growth—as reflected in the Share a Slice of Hope initiative—will require the help of pizzeria operators willing to donate food throughout the year or to give money to the nationwide campaign. The Share a Slice of Hope effort is modeled closely on the highly publicized Rosa’s Fresh Pizza (rosasfreshpizza.com) story that drew national TV coverage. Located in Philadelphia, Rosa’s walls are plastered with customers’ sticky notes designating donations to feed Philly’s hungry with $1 slices of pizza. Kadwani wants to encourage other pizzerias to follow that model, complete with sticky notes and free pizza. “Pizzerias want to help,” Kadwani says. “They are perfect conduits to the people who need help because they operate within the local community, offering a relatively low-priced source of nourishment that everyone loves. We hope Share a Slice of Hope Week will capture this spirit as we collect donations to support a sticky notes campaign in pizzerias, offering free pizza slices to those in need. We hope that a lot more local pizzerias will get involved, supporting shelters and the hungry around the country. We really believe that neighborhood pizzerias, as cherished community gathering points, can become regenerating centers of hope.”

“A simple kind word, a gentle touch, a caring smile can make a person under stress want to fight on. We create a vehicle to energize one person in one moment on one day.”
—Obaid Kadwani, A Slice of Hope

Taking part in a Slice of Hope event is a life-changing experience for volunteers and attendees, Kadwani says. Event volunteers are eager to share a helping hand but careful never to stigmatize the proud people they serve. Kadwani recalls a woman who contacted him from Darby, Pennsylvania, near Philadelphia. She pleaded passionately for a Slice of Hope intervention at the local homeless shelter. “Something in the way she insisted made me agree to do it,” he says. When organizers met her at the party, amid the high-energy music and excited children, the middle-aged woman—self-sufficient but living with multiple sclerosis—told them she had lived in the very same shelter when she was six.

“After taking part in these events, you quickly discover there is no one stereotypical face in these shelters,” Kadwani says. “Many who come to a Slice of Hope party aren’t homeless—they’re working hard but just don’t make enough money to live adequately. You will see the faces of families with children, college students and the elderly. One child in five in this country is hungry, and that’s a national blemish we must attend to.”

The momentum built up by A Slice of Hope over eight years has forged a rock-solid commitment to the future. Its impact is real and effective—and sprinkled with more than a little magic, Kadwani believes. “We’ve learned how many good people there are in the world—our volunteers, donors and the people we serve, those individuals who are trying hard and simply need a slice of love and encouragement,” he says. “Yes, our rapid growth means the effort takes more time, but we can’t stop now. We’re trusted by the entire country and individual communities to complete our mission. The project is full of magical stories. It is life-affirming and teaches me that everything that happens is meant to happen.”