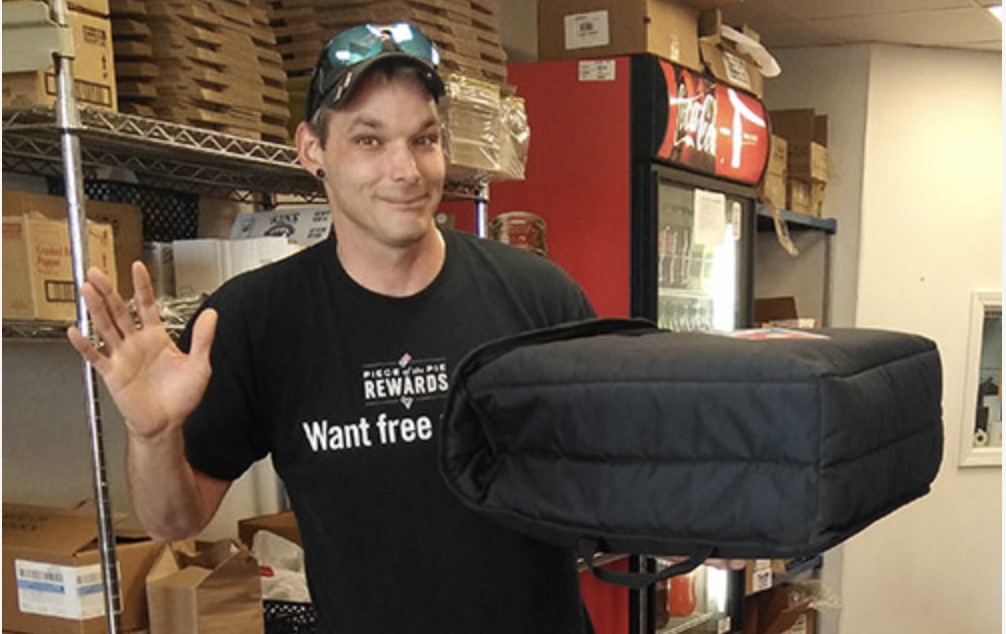 When Randy Foote was eight years old, he played a daring game with trains in his town. He jumped on the side of them and rode them through town. When his parents found out, he promised not to do it again, but a week later, he ran alongside another one.

“I grabbed the ladder, but the train was going too fast,” he remembered.

As he hung on, the train dragged him, so his immediate reaction was to let go. A few moments later, he was writhing in pain on the ground while his sister ran to get help from the neighbors. He lost his leg in the accident, and has since relied on a prosthesis to live an active life.

Randy can now be seen around his small town of Pevely, Missouri, delivering Domino’s pizzas. If you’re his customer, he’ll remember your name when he sees you on the street.

In addition to delivering pizzas, he enjoys playing sports and being active with his kids, but in the last few years, the condition of his prosthetic leg made it difficult for him to walk or do anything strenuous. He kept delivering pizzas, but was afraid to do much more. His prosthesis was worn thin and he worried about it coming unattached.

“Really all I wanted to do was keep walking, to be able to keep working to support my family,” Randy said.

Randy was excited when he was celebrated one year with his Domino’s store and was eligible for insurance after going for years without it. He went to his doctor for a new prosthesis, but received unexpected news about the cost. Insurance would only cover a portion, and the remaining amount was more than he could afford.

After years of waiting and hoping, his immediate reaction was anger.

An area manager for his store heard about his struggle and suggested he reach out to Domino’s Partners Foundation.

The foundation is funded by donations from Domino’s franchise and corporate employees, many of whom donate $1 per paycheck. It offers assistance to any Domino’s employee facing financial hardship from medical illness, injury, natural disasters or the death of an immediate family member. Randy donated regularly through his paycheck, but never thought to ask for help.

He talked to DJ Johnson at the foundation to see if they could help with the cost of a new sleeve for his current prosthesis, which would at least improve the fit.

When DJ asked him how much a new prosthesis would cost and if Partners could help with that instead, Randy was floored.

“To be honest, I really didn’t think anyone would be able to help,” he said.

DJ called Randy back a month later to see how he was doing with his new leg, and his response brought tears to her eyes.

“When I called Randy to follow up, I was so happy. He was out playing tag and football with his kids, and I could hear the joy in his voice,” she said. “It’s wonderful to be able to help our team members get their lives back on track after experiencing a hardship. The foundation continues to grow because of all of the very caring team members who support it.”

Randy says his pessimistic outlook of hoping for the best and expecting the worst has started to change since getting support from the Partners Foundation.

“It made me feel like that someone actually cared about what I was going through,” he said.

He now encourages fellow store team members to donate because he wants everyone who needs help to be able to receive it like he did.

“When I could no longer play sports and be with my kids and go to the park – it messed me up, literally,” he said. “I felt like I lost who I was, and I feel like I’m starting to get that back … I don’t feel like a bystander in my kids’ lives anymore.”