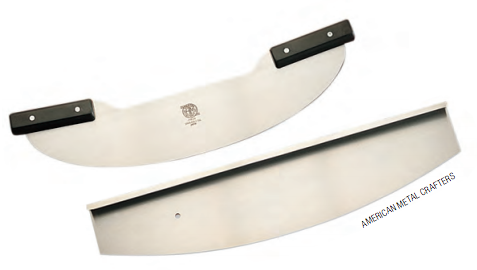 How do you slice your pizza? For most, the standard rolling cutter is affordable, effective and quick. Still others—especially peddlers of deep-dish and grandma-style pies—find a rocking knife superior and, in a way, much more exciting. No doubt there are plenty of schools of thought on the issue. For instance, in Rome, where slices are priced by weight and length, it’s not uncommon for operators to cut their pies with scissors. Neapolitan pizza makers, who serve 10’’ delicacies with a knife and fork, may shudder at the idea of cutting their pizzas entirely. Perhaps the only definitive factor in the debate is that, like pizza itself, there’s no universally correct way to go about it. After all, the end result is a fresh pie with comparable portions no matter what tools are utilized. Co-owner of Metro Pizza (metropizza.com) and pizza professor John Arena, who teaches the history and culture of pizza at the University of Nevada at Las Vegas, points out, the “traditional” method of cutting pizza often varies with geography. “Preferences seem to be regional and prone to rationalization based on familiarity rather than efficiency,” he explains. “On the East Coast, rollers are definitely the cutter of choice, while in the Midwest and West, the rocker is often employed. I suggest any serious pizza maker become familiar with all of the tools of the trade before settling on one type.”

To help bring the debate into your pizzeria, PMQ tracked down manufacturers, operators and a custom designer to help you decide if 2011 is the time to familiarize yourself with a few new cutting tools.

When you’ve got a unique product or just want to stand out, you might require a custom tool, like Frankie Flood’s chopper motorcycle-inspired cutters. These certainly aren’t your grandfather’s rolling cutters. Since 2001, this custom designer, an assistant professor of metalworking at the University of Wisconsin at Milwaukee, has made tools for some of the top-ranked pizza makers in the United States and Australia. All of his cutters are handmade, and every cutter he’s ever made has been sold to a collector or chef (generally for between $1,000 and $1,500). While these are great to place on your shelf as art, Flood points out they can serve a pizzeria, too. “I’ve used several of the cutters in my kitchen or in my studio; I like to use each cutter before I sell it,” he says. “This is important because I see them as functional. We’re just accustomed to our tools and utensils having very little character or uniqueness.”

While Flood’s knives are collectible, usable and attractive, other custom jobs can be strictly utilitarian—and can be big money savers. Last year, Richard Ames, the owner of Daddio’s Pizzeria (daddios.ca) in Grand Prairie, Alberta, Canada, ordered a custom rocking knife—which resembles a machete more than a traditional two-handle rocker—that can keep an edge four times as long. “My staff and I have come to realize the real value of a good knife,” he points out. “With the knives I was using before, I was paying $40 every three weeks to have them sharpened. I paid $175 for this one, and I get free sharpening for life.”

While Ames purchased from a small knife maker, larger manufacturers can also be solicited for customized work. Rob Crow, president of Lloyd Industries, a manufacturer in Spokane Valley, Washington, notes that some manufacturers frequently go the extra mile to meet a customer’s needs. “Often, for breadsticks, or for operators who want to cut dough in an unusual shape, you’ll need a special tool,” he points out. “There are ways to save time and money and prevent a potential accident by looking at alternatives.” Lloyd has custom-designed several breadstick cutters, often with multiple blades to ensure a quicker, more even cut; the company has even produced a rolling pin with blades!

No customer likes being stuck with the undersized slice, and the roller is an easy-to-master and affordable cutter that has a place in almost any pizza kitchen where the pie is cut into equally sized slices. In addition to its affordability, the roller is ideal for large (imagine trying to cut a 36’’ pie with a rocker), thin and more sparsely decorated pies. Even if you don’t serve your pies in slices, the rolling cutter is an easy tool to keep on hand just in case. Jonathan Goldsmith, the owner of Spacca Napoli (spaccanapolipizzeria.com) in Chicago, prides himself on authentic flavors and Neapolitan technique, including the traditional method of serving the pie with a knife and fork. However, if the occasional customer wants his pizza cut in quarters, servers are prepared. “It’s a service our waiters offer our customers,” he notes.

Although rolling cutters are easy to use and carry, they do have some disadvantages. Rollers are harder to clean and sharpen, and, when they’re dull or have not been properly rinsed, they can mar your pie by snagging ingredients. “For years, we used the roller,” says Ron Mathews, operator of Rockstar Pizza (rockstarpizza.net) in Brownsburg, Indiana. “It was OK, but every now and then, you would get the dreadful drag. We switched to the rocker and never had that problem again.”

To prevent the “dreadful drag,” Rich Packer, vice president of American Metalcraft, a manufacturer in Melrose Park, Illinois, urges operators to regularly hand wash rolling cutters, especially those with wooden handles. Also, he points out, rolling cutters have been a great ally in the gluten-free trend, as colored handles help prevent cross-contamination.

While the rolling cutter may be a widely accepted standard, the rocker has long been a cherished tool of those who produce a thicker pie. If you serve pies with fl at Italian meats such as salami, pepperoni and bacon, you may prefer the extra force that a sharp rocking knife provides. The style lends itself to thinner pizzas, too: Arena notes that it’s a quick solution for many Chicago thin-crust makers to divide their pie into squares. However, when your kitchen gets swamped with orders and every second counts, the rocker has another advantage. “Speed is essential,” says Marco D’Annibale, president of GI.Metal, a manufacturer with offices in Italy and Yorkville, Illinois. “The more pizzas you are able to cook and serve during the rush hours, the more money you make. You need skilled people at the oven, but the right equipment and tools can help more than you may think.”

However, rockers aren’t always straight. There are other interesting takes on this tool that may be ideal for your operation. Lloyd Industries offers a circular rocking knife, the Equalizer, which was born out of demand from operators with school lunch programs. The rocker always cuts eight equal slices, ensuring pizza eaters are content with their portions. While rockers are beloved by many, they do tend to be more expensive—unlike rollers, which have a wide price range, you can expect to spend between $80 and $120 for a solid rocker—and, like with any kitchen knife, rockers can be dangerous when used recklessly. Arena points out that, when left unattended, a rocker can be knocked to the floor and potentially hit someone’s leg or foot.

Although there’s no clear winner in the pizza slicing debate, both rockers and rollers have strengths and weaknesses, and there are new products being developed every year. If you’re known for producing a variety of crust types and styles, it may be time to bring in a few new tools and see if there’s a better solution for your operation. If you’re frustrated with your current tools breaking or going dull, or if you’re looking to find something unique, don’t be afraid to seek out a custom device from a knife maker or manufacturer. After all, any way you slice it, pizza is your craft and passion, and you deserve to have the right tools for the job.