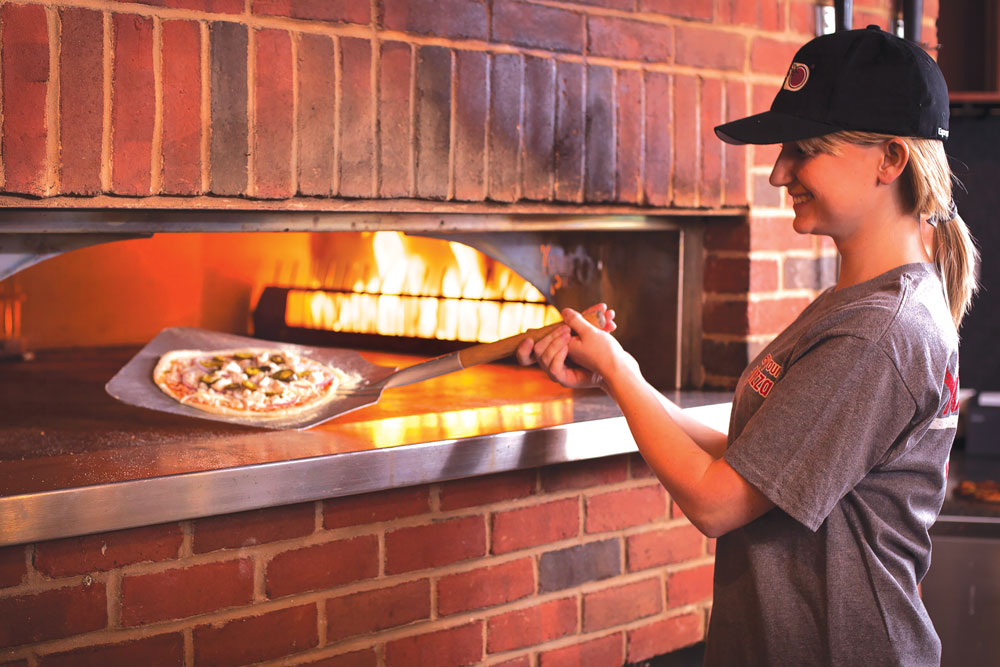 Expecting the fast-casual frenzy to simmer down any day now? Think again. According to Technomic, in 2015, its growth rate surged by 11.5%, compared to 5.5% for limited service as a whole and 4.4% for quick service. The research firm also found that pizza tops the list of fast-casual outlets, with 37% of the share, beating out “specialty” with 19%, chicken with 16%, and burgers, sandwiches, Asian, Mexican and bakery concepts each representing 15% or less.

Quick-bake ovens have been a crucial component in the meteoric rise of fast-casual pizza. Customers create their own masterpieces start-to-finish in minutes, and an increasing number of competitors are tapping into the customization craze while catering to time-starved consumers. PMQ tapped head honchos at three fast-growing concepts to share their take on the trend, along with some crucial intel on the ovens that fire their businesses.

“I think customers have latched onto the flexibility of fast-casual—the fact that a group of four could come in and each person gets exactly what he wanted.”
—Drew French, Your Pie

Fast-casual is the fastest-growing segment in the entire restaurant business. There are five to 10 competitors right now growing superfast, including us. We opened our first store two years ago, but we already have 35 in the pipeline for 2017 and are growing outside of Ohio, into about eight other major markets, through franchising. I expect 50 by the end of the year. Fast-casual is growing so quickly that now our focus is simply finding new locations!

The key to our operation is fast-cooking ovens. You’re competing with Five Guys and Chipotle in terms of speed, which is important for lunchtime customers. The oven we use is really special, and we’re the largest fast-casual company using its new technology. Our Marra Forni oven has a deck rotating around the fire, which allows for a more uniform bake and less manual error than a traditional wood-fired oven. It’s also gas-fired, because using wood changes the complexity—for example, you’ll have different requirements for the fire code, while, with a gas-fired model, we can simply direct-vent the oven, with no hood.

That’s been a key to fast growth: not needing someone that’s very technically trained on running the oven. You put in the pizza, it goes around the fire twice, and you pull it out, making sure it’s cooked correctly. Heavily topped pies might take a little longer, but we set it up to be pretty automatic.

The oven runs at 800°, and the pizza takes about 130 seconds to cook. We can make more than 200 pizzas per hour. We’ve never hit a point where we couldn’t get pizzas in within a minute or two. We leave the ovens running at a low temperature overnight and fire them up in the morning; it takes about 45 minutes to reach the desired temp, and it remains there all day.

Lunch is very important, about 40% of our business, but pizzas are a popular dinner item, too. People have only 30 or 60 minutes for lunch, so they don’t have time to waste. We get them in and out in eight minutes, no matter where they are in line. Someone presses the dough out, someone sauces, someone cheeses, someone tops, and we put it in the oven, so we’re pretty efficient, especially at lunch.

I went to Italy eight times to compete with the U.S. Pizza Team and learned a lot there, and I can tell you our Neapolitan pizza cooks perfectly in that high temperature. But to work this fast, you need a thinner crust. (We also do a gluten-free version.) And we cook our sausage, chicken and meatballs, plus other toppings, in the oven—you can do anything with it!

We started in 2008, but fast-baking brick ovens have been around for thousands of years. We started using them in a high-end fast-casual setting to create a more accessible pizza experience. Over time, people adopted other oven styles, like conveyors, to make pizza in this setting. Those innovations have helped the rise of fast-casual pizza.

We wanted to give people a choice in the pizza dining experience. Before, it wasn’t all about customization and personal pizza done fast; you typically had to split a pizza unless you grabbed a slice. I think customers have latched onto the flexibility of fast-casual—the fact that a group of four could come in and each person gets exactly what he wanted. And we offered different options for sauces, cheeses and toppings. Seeing it all happen in front of their eyes, fresh and customizable, got people excited.

I think it has taken a while to get customers used to pizza for lunch; ordinarily, lunchtime is not when people have always thought about pizza. Even now, changing that perception is still a bit of a challenge when we enter new markets. But lunch is a big part of what we do; it was 40% lunch and 60% dinner when we opened, and now it’s almost 50-50. In some markets, we do more lunch than dinner, but generally we do more dinner business. Part of that is our approach: We’re tied to craft breweries and offer more of an atmosphere.

We’ve chosen bigger ovens over time so we can put through more pizzas per hour; in our first store, the oven became a bottleneck for us. We use Woodstone brick ovens with natural gas because we think it makes a better-tasting pizza and creates a better guest experience when they see the oven fired up. It allows us to fully cook a pizza regardless of toppings—a cheese pizza takes 90 seconds, with cooking time increasing as more ingredients are added. We cook at 600° to 800°, depending on time of day, and the oven takes a few hours to heat up.

How to operate the oven is one of the easier things to teach. We teach based on sight, since each pizza has a different amount of toppings. All employees start at the oven on day one, and we train them how to rotate the pies. We can cook 25 pizzas at once—120 or more per hour. All employees have to know is not to burn the pizza.

Before opening, I tested out different recipes for the oven; you have to adjust your water content when you cook at higher temperatures. We offer a typical thin, hand-tossed Italian crust, which gets some rise, since we don’t use a dough press. I was inspired by my honeymoon to Italy, so Neapolitan was the style I always wanted to offer.

The oven is the heart of our restaurant, and we can cook anything with it: our panini breads, mushrooms or other toppings, or salmon on cedar planks. Everything we cook goes through the oven—even our own turkeys for Thanksgiving!

We use a TurboChef conveyor convection oven—a very hot, very fast-baking oven—so pizzas cook in 145 seconds. By the time customers pay, their pizza is hot, fresh and ready to go. Fast-casual pizza has become so popular because it seizes a part of the day at which you wouldn’t normally get pizza—lunchtime.

People love a hot, fresh pizza with quality ingredients, and everyone loves choices. Kids may love cheese pizza, but Mom and Dad can have an “everything” pizza. Or someone can work around their dietary restrictions, from vegan to gluten-free. It’s a personal experience and a personal-size pie.

“There are conveyor-style, brick and coal-fire ovens to choose from, depending on the type of crust you’re cooking. The important part is that they’re very hot for a fast bake.”
—Patty Scheibmeir, Pie Five Pizza Company

There are conveyor-style, brick and coal-fire ovens to choose from, depending on the type of crust you’re cooking. The important part is that they’re very hot for a fast bake. We cook at 650°, but some operations might cook at 800°, all the way down to 500°, depending on style or the attributes they’re seeking. We have four different styles of crust (Crispy Artisan Thin, Classic Pan, Traditional Italian and Gluten-Free) all cooking in the same oven—we’re one of the only companies in the industry doing that. Others making one style of crust have more flexibility in their type of oven or temperature settings.

Our regional or field leaders have expertise in the ovens, but employees don’t need expertise to work them. We want them to create the perfect pizza, and we understand the technology behind it. We also make, in-house, all of our desserts, and the oven allows us to change the temperatures very quickly with the push of a button; the oven ranges from 100° to 650°. We can also change the airflow with top and bottom settings and adjust the speed of the belt, so it’s very flexible.

We can get eight pizzas in the oven chamber at once. My job is playing with the dough so they all work with our one cook setting, but a Chicago-style deep dish wouldn’t work with our ovens. Our formulation modifies the dough, adjusting the blend of flour and yeast, protein content and mix times—whatever it takes to make sure it’s not too brown or too light and that it’s easy to operationalize and works from a financial standpoint. A lot of balancing goes into the dough formulation. Even if we like it, if the consumer doesn’t, we’re not going to sell it.