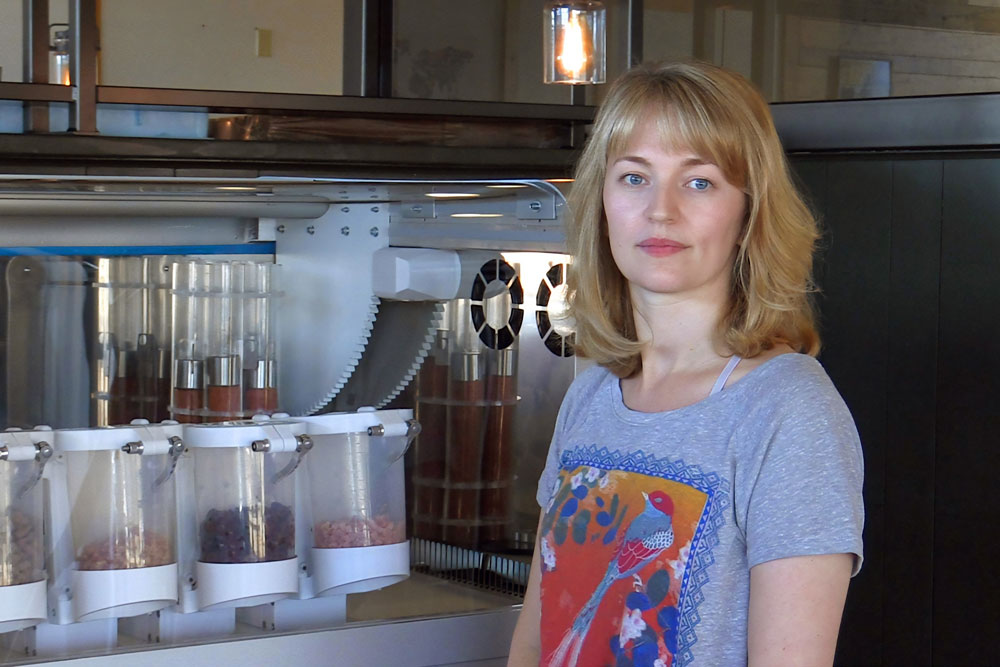 Alena Tikhova, CEO of Dodo Pizza USA, was never especially keen on the idea of pizza making robots when she saw them in action at pizza industry events around the world. Now, she has three of them in her shop in Oxford, Mississippi, and she’s testing them out to prove—or disprove—their cost-saving power for pizzeria owners in a small but bustling market.

Tikhova says she was contacted by the team at xRobotics, headquartered in San Francisco, a couple of years ago about piloting their technology, which specializes in spreading sauce and topping pizzas with cheese and all of the standard ingredients. Called the xPizza One, it consists of a machine equipped with sauce, cheese and topping dispensers and little pod-shaped bots that carry the pizza crust from one dispenser to the next. In terms of footprint, it takes up roughly the equivalent of a 6’ make line and can support up to 17 ingredients and most common pizza sizes.

If Kirk and Spock were craving a meat lovers pie on the Starship Enterprise, the xPizza One, developed specifically for the pizzeria industry, might be their choice.

“I was, of course, skeptical at first,” Tikhova recalls. “I’ve seen a lot of different robotic solutions. They exist, they’re out there. But they seemed too futuristic. Too expensive, too much going on, too hard to maintain. I wasn’t a strong believer.”

“It’s natural to make mistakes [when topping a pizza]. I still make those mistakes after eight years in the business—and the robot doesn’t. It follows the recipe, and you don’t have to worry about it.”
— Alena Tikhova, Dodo Pizza USA

But after testing the technology over a period of about a month—from March 11 through early April—she’s sold on it.

“I liked the idea that this robot is a tool that doesn’t try to do all of it,” Tikhova says. “You see a lot of vending machines. We’ve seen Zume Pizza, which tried to automate the entire process. One thing is, they always fail, because there’s a lot of customization [with pizza]. Another thing is, this machine is still interacting with your staff. You still need a decent amount of people to run the shop. It’s working with you, by your side.”

Dodo Pizza has always been a tech-driven company. Founded in 2011 by Russian entrepreneur Fedor Ovchinnikov, Dodo is the fastest-growing pizza chain in the world, according to Technomic, with 677 stores around the globe, including two in the United States—Oxford, Mississippi, and Germantown, Tennessee. (In comparison, Domino’s ranks as the sixth fastest-growing chain worldwide, and Pizza Hut is No. 7, as reported by Technomic in February 2021.)

If the technology works at Tikhova’s shops in the American South, Dodo Pizza aims to install it at all of its stores. The stakes are high, and Denis Rodionov, CEO and co-founder of xRobotics, knew his team had to get it right. After multiple remote conversations with Tikhova about the challenges of running her pizza shops, he flew down to Memphis, Tennessee, and personally put in some hard hours at the Dodo location in Germantown, a Memphis suburb.

“He went to work in the store, chopping vegetables, making dough, loading the oven,” Tikhova says. “He was a quick learner, too…and discovered the pain of long hours and monotonous work.”

During the visit, Tikhova and Rodionov brainstormed about the xPizza One technology, swapping ideas for fine-tuning it. Then Rodionov went back home. “A year later,” Tikhova says, “he called and said, ‘OK, it’s ready.’”

For Rodionov, xRobotics and xPizza One were the logical next step in his own career. “After my previous startup got successfully acquired by a large corporation, I gave myself some time to think about what I wanted to do next,” he says. “I ended up having a lot of conversations with people from the restaurant industry—pizza in particular. It was shocking to me to find out how inefficient and challenging the pizza business was. Pizza shop owners are having a hard time finding help, while pizza itself remains the most labor-consuming food group ordered by Americans most often. I knew immediately, then, that I had to do something about it. An affordable kitchen automation technology sounded like something nobody had done before, but it was doable. Here we are now with xPizza One.”

The xPizza One is strictly a pizza topping machine. Unlike some pizza-focused robotic technologies, it doesn’t have a built-in oven; instead, once the bots have topped the pies, an employee removes the pizza, takes it to the oven, bakes it, and plates or boxes it for the customer.

But during the initial monthlong testing phase, the machine proved that it could prep up to 100 pizzas per hour. It processed 472 pies and saved Tikhova’s team an estimated 32 hours of manual work—with zero complaints from customers. “It’s made by people who actually worked in the kitchen, understood how it works and didn’t just [design] it out of an office in San Francisco with a vague idea of how the pizza business works,” Tikhova says. “It’s made by people who actually suffered through this work and came up with certain solutions.”

“The most mind-blowing experience I’ve had with the machine so far: We took the busiest hour in my store of all time—I think it was the Ole Miss-Alabama football game of 2017, when we were so slammed, I couldn’t even breathe—and simulated that one hour with this machine, with all the real orders, people coming in and deliveries going out,” Tikhova says. “We did it all with this machine, and I felt how much easier that was. It’s not how much time it saves—it’s how much you don’t have to worry about it. I can put a pizza in and go back and grab another container of pepperoni or go and talk to a customer. It’s saving me so much hustle.”

The xPizza One boasts a fully modular design, so the parts can be easily replaced on the spot by pizzeria staff members if something goes wrong. And, according to Tikhova, it delivers the kind of product consistency that’s essential in the pizza business. “It’s natural to make mistakes [when topping a pizza]. I still make those mistakes after eight years in the business—but the robot doesn’t. It follows the recipe, and you don’t have to worry about it. If anything, the consistency of your product goes up, not down.”

The machine is fully integrated with Dodo’s POS system to fulfill each order as it comes in. Each of the three robots makes its own individual pizza, so they can top three pizzas simultaneously, typically in 90 seconds or less. Thanks to motion-detection technology, they don’t bump into each other—the process is smooth, with colorful lights flashing and a sci-fi-like whirring noise generated by the robots’ motors. “The three little robots know where the other robots are at all times,” Tikhova says. “This robot is getting green peppers, while this one is getting onions. It’s statistically, mathematically perfect.”

But here’s the big question: Can pizzeria operators afford it? Tikhova says yes. “What I like about this machine is that I don’t pay anything up-front,” she says. “We established how many pizzas per hour I need and how much money I would be saving on labor…Then I pay a percentage of what I would be saving. If I had to pay a lot of money up-front, or if I was on some kind of payment plan that I don’t control, that would be different.”

Oxford is a college town, meaning it’s a seasonally driven market. Football season is incredibly busy, with tens of thousands of fans pouring into the little town for big SEC games. Christmas is dead, and the summers are pretty slow. “Say it’s summertime, and I don’t need that many pizzas,” Tikhova says. “My [payment] rate goes down, because I’m making less. My rate goes up and down, depending on how good my business is doing, which is important because I can always afford it.”

Maxim Kotin, Dodo Pizza’s head of communications, notes that a lot of the hype around pizza robots is just that—hype. “In our sector, a lot of startups working in automation put robots in the center of the entire business,” he says. “This strategy is rarely sustainable. If you have a robot making pizzas, burgers or burritos, it doesn’t mean that you’ll have a successful business—especially if this robot is pricey. The robot is just one element of the equation that will define your success. What we like in xRobotics’ approach is that they treat their robot in a more reasonable way—just as a piece of equipment. Very sophisticated, advanced, innovative, but still only a tool. In the right hands, this tool can work wonders.”

And let’s face it: Robots are pretty cool, even if you’re not a fan of kitchen automation and the possibility of jobs lost to new technologies. The marketing appeal of pizzas prepped by robots is hard to beat in any town. Dodo’s young college-student customers are naturally drawn to the Star Wars-like visuals of small, sleek bots scooting around with pizza crusts from station to station, like little pizza making R2-D2s.

“That’s one of the things that sold me,” Tikhova says. “I’m a visual person. I like beautifully designed things. This machine looks like it came from a spaceship. If Elon Musk needed a designated pizza person on our spaceship mission, this is what I’d take. It looks very futuristic, with all the different lights flashing. But it’s not just made this way to be beautiful—it also serves a purpose. The different lighting indicators are communicating the steps. If you’re loading the robot, it’s one color. When it’s ready, it turns green. It kind of screams without screaming at you: ‘You can come unload me now because I have a job to do. I need another pizza to prep!’”