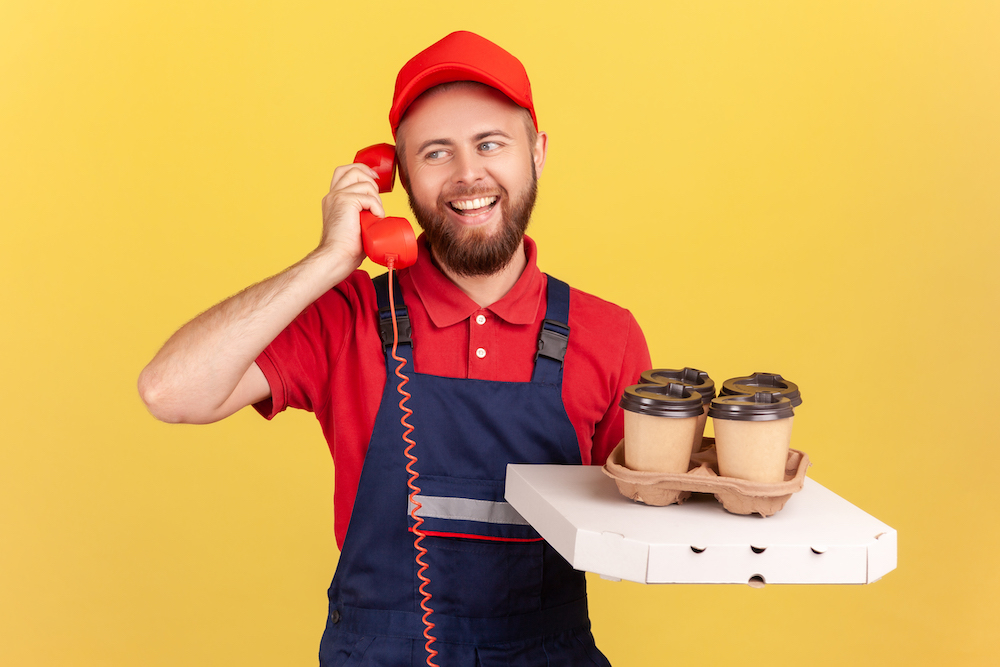 The era of hair bands, mix tapes and ladies’ shoulder pads lives on at the newly opened Jolly’s Pizza in North Royalton, Ohio.

Let’s talk about the phones.

After all these decades, Jolly’s Pizza has hit upon a way to make ordering pizza by phone unique—and fun—again. But, as Cleveland.com reports, their phone system is not designed for delivery or carryout orders (the eatery accepts online orders for that). It’s for diners who are already seated in the restaurant.

Every table in Jolly’s dining room features a red, wall-mounted, corded telephone, the old-fashioned kind, albeit with push buttons instead of a rotary dial. When diners have settled on what they want to eat, they pick up the phone, which causes another phone at the pizzeria’s front counter to ring. A Jolly’s Pizza employee answers and takes the customer’s order. From there, food runners bring out the pies and other menu items to the table. But if the customer needs more napkins or a drink refill, they simply pick up the phone again for a quick response.

Related: How TikTok’s Keith Lee made a struggling pizzeria world-famous

Call it a gimmick, but it’s a unique service that also fits perfectly with Jolly’s retro vibe. And, since some of us in the post-pandemic age are a bit skittish about strangers’ germs, a Jolly’s employee makes sure to sanitize each telephone receiver whenever a table gets bussed and again when new guests take over the table.

The 80s-style phones aren’t the only unusual facet of the business model at Jolly’s Pizza. According to Cleveland Magazine, Van and his co-founders, Simon Peck and Levi Hume, plan to make it an employee-owned company. Well, essentially, anyway. The “vast majority” of the pizzeria’s profits will reportedly be paid out to Jolly’s Pizza workers as bonuses. Vann told the magazine that he couldn’t offer stock options because the restaurant has a liquor license and many of its employees are teenagers.

Employees will also serve as brand ambassadors, complete with business cards, which they can give away to their friends, relatives and strangers to be redeemed as coupons for free ice cream.

“We want to empower employees to own their labor,” Vann told Cleveland.com. “They’ll care because their work will find its way to their bottom line.”

In the Cleveland Magazine interview, Vann repeated that sentiment, noting that Jolly’s Pizza received 91 applications for 26 open positions before opening the restaurant.

“We said, ‘Let’s build this to be a restaurant built on wellness,’” Vann said. “We want [employees] to be empowered…and then selfishly on our side, if things go up, it’s better for us. It’s better for everyone. That’s the goal.”