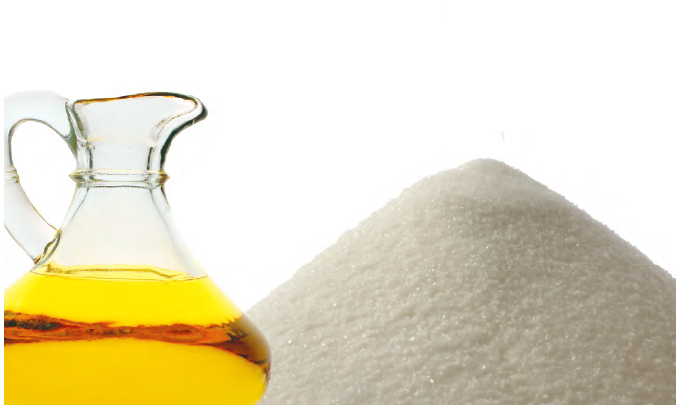 The difference between sugars in a dough recipe is very little. The only real difference is with regard to the slightly darker color of the dough with the use of brown sugar, otherwise, they both provide nutrient for the yeast to metabolize. With regard to finished product quality, both white and brown sugar provide very similar levels of total sweetening to the finished crust, but, the brown sugar, due to its roughly 3% molasses content, will provide a slightly darker crumb color and depending upon the level used, it might also provide a slightly different taste to the finished crust. We have found that when the level of brown sugar is at 2% or less of the flour weight, the flavor contribution is insignificant, but when the sugar level is increased to the 4% to 8% range, aside from the total sweetness, the unique “molasses” flavor is significantly increased.

Other types of sugar that can be used in pizza production include dextrose (corn sugar), which is another white sugar, which looks similar to sucrose (table sugar) but perhaps a little finer. Dextrose is only about 93% as sweet as sucrose, so it doesn’t provide quite the same level of sweetness at comparable use levels. In the finished product, dextrose typically provides a slightly lighter crust color than that provided by sucrose, also known as cane or beet sugar. Then there is the all-time favorite, honey. Honey is well known for its unique flavor and overall widespread consumer recognition. Even when used at typical pizza levels, honey can impart its unique flavor into the finished crust. If a more intense honey flavor is desired, you have two options. One is to simply use more honey, but at upwards of $3.00 per pound, that might prove to be a little pricey. The other is to use a darker-colored honey. Remember, the darker the honey color, the more robust its flavor, so the same amount of a darker-colored honey will provide a more pronounced honey flavor. The only downside to using a dark-colored honey has to do with the darker crumb color that it imparts to the finished crust. This might prove to be objectionable with a white or lighter-colored crust, but when used in a wheat, whole wheat, or multi-grain type crust, it might be just the ticket to getting a nice brown crumb color rather than the dingy grayish-brown crumb color typical of these crusts. Keep in mind that these types of breads sold at your local supermarket probably contain some caramel color to achieve the desirable brown crumb color we have come to expect from these types of breads.

From time to time we hear of malt being used as a sugar in pizza crust production too. Malt, being a dark-colored material, will have a darkening aff ect upon the crumb color of the finished crust just like a dark-colored honey, so its use might be best reserved for applications in the same wheat, whole wheat, and multi-grain type formulations. The flavor imparted by malt syrup is best described as much like that of a candy malted milk ball. One very important thing to keep in mind when considering the use of malt/malt syrup is to make sure you purchase non-diastatic malt (another way of saying non-enzyme active malt). If you use enzyme-active malt by mistake, your dough might soon become extremely sticky and difficult to handle. Typically, malt syrup is used at levels of 2% to 5% of the flour weight.

Another type of syrup that we see being used occasionally is molasses. Molasses has a very robust flavor and due to its color, it will have a significant darkening affect upon the crumb color of the finished pizza, so again think of using this one in wheat, whole wheat, and multi-grain type dough formulations. Due to the rather significant flavor impact that molasses has, I suggest starting with low levels, of not more than 2% or 3% of the flour weight, and then going up or down as the flavor profile of the finished crust dictates.

I realize that all of these syrups contain a portion of water, normally ranging from 20% to 30% of the weight of the syrup, but in considering the amounts used, you might not need to worry about correcting for the diff erence in dough absorption until the amount added is at or above 6% of the flour weight, and even at that level, the amount of water contributed by the addition of the syrup will only be about 2% (at best) of the fl our weight.

In case you’re wondering why there’s a sudden interest in using these different, nontraditional types of sweeteners, it’s mostly due to consumer request or demand. For whatever reason, white, refined sugar has gotten a bad rap with many consumers leading them to believe that some of these syrups (honey) are better for them. There is also the “natural” foods movement that is coming on strong (in case you haven’t noticed). Consumers are losing confidence in the safety of the foods that they are purchasing and as a result many are grasping at anything that restores some of that lost confidence. If that means a shift towards more “natural” ingredients, both in the dough, and on our pizzas, so be it.

Does it really make any difference what type of oil I use when I make my pizza dough?

From a functional point of view, no, but from a flavor point of view in your fi nished crust, the answer could very well be a resounding yes. Different types of oil can impart different flavor profiles in the finished (baked) crust. For example, olive oil will impart a very characteristic flavor as will butter oil while oils such as canola, palm or corn oil have very little, if any, perceptible impact upon the flavor of the finished crust. Keep in mind that any type of oil will impact the flavor of the finished crust by carrying or retaining other flavors within the crust, but here we’re just talking about the flavor imparted by the fat/oil itself. In a number of Latin American countries we see lard being used as a major source of fat in many products including pizza dough/crust. Lard is no exception; it provides a very unique flavor to the finished crusts.

Lately, I’ve seen a growing interest in making dessert and breakfast pizzas. In these applications it might be advantageous to look at the type of fat/oil used in making our crusts. For example, in a dessert pizza, replacing olive oil with either butter or butter oil, or even lard, could greatly improve the fl avor of theend pizza by making the crust taste more like a pastry than a pizza crust. The same thing can be said when making a breakfast pizza. If the high cost of olive oil is pulling on your purse strings, you can get some relief by blending your olive oil with up to 80% of a blander oil, such as canola. When used in making pizza dough, the olive oil flavor will still dominate the finished crust, but your total cost of the oil will be significantly lower than 100% olive oil. You can also do the same thing with butter. In this case we have found that you can get satisfactory results by cutting melted butter into canola oil at the rate of 1-part butter to 3-parts of canola oil. If flavor or cost is an issue, be sure to pay attention to the type of oil/fat you are using in your dough, it can, and does, make a difference.