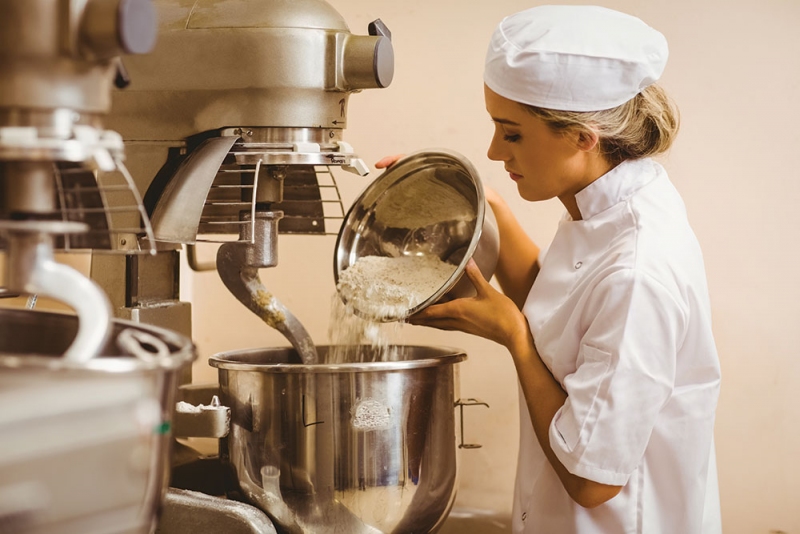 Related: How to minimize snap-back in your pizza dough

Q: What’s the cause of blown dough?

A: I get a lot of questions about why dough balls “blow” after being placed in the cooler for extended holding/cold fermentation. The reason is either due to excessive yeast or a temperature control/dough management issue. But in only a handful of instances have I ever been able to attribute blown dough to excessive yeast. In those cases, the yeast level exceeded 3% compressed yeast; in one instance, it exceeded 5%. Most often, though, it’s a problem of temperature control or dough management.

The warmer the dough is coming off the mixer, the harder it is to cool the dough to 45°, the temperature at which the rate of fermentation is checked. Overly warm dough might continue to ferment well into the refrigeration process. This often allows the dough to begin to leaven, becoming less dense, which in turn makes the dough into a better insulator, allowing its core to ferment for significantly longer than needed. Much of that is due to the heat of metabolism; as the yeast is fermenting, it’s also generating heat that must be removed from the dough if the fermentation rate is to be controlled. The change in dough density combined with the heat of metabolism can result in more fermentation than desired, resulting in either inconsistent performance or blown dough.

But you can run into problems even when your finished dough temperature is on target. If the dough boxes are not cross-stacked in the cooler to allow both heat and moisture to escape, each box acts as an insulator, trapping the heat of the dough inside while allowing condensation to build up in the box. The result is almost always blown dough.

So what’s the perfect length of time to keep your dough boxes cross-stacked? It depends on several factors. Heavier ball weights require a longer cross-stack time than lighter balls. Also consider the temperature of the cooler itself, and the time when the dough is made. If we make more dough during the afternoon lull before the cross-stack period is completed, there will be a lot of traffic into and out of the cooler as we move into dinnertime. Hence, our cooler may not be operating at peak efficiency during those crucial hours.

I recommend making and processing your dough shortly after the evening rush. This allows the dough balls to remain cross-stacked in the cooler with reduced opening and closing of the door. The cooler will cool more efficiently and at a more consistent rate.

In some cases, you might take too long to ball and box your dough after mixing, in which case the dough starts actively fermenting before the dough balls even go into the box or the cooler—another recipe for blown dough! The rule is to get the dough scaled, balled, boxed and into the cooler within 20 minutes after mixing.

You’ll get better at this with practice. You might even try using a mechanical dough rounder to speed up the process, especially if you’re making several doughs and scaling and cutting smaller-weight dough pieces. For the most part, though, you can address the issue by calling “all hands on deck,” meaning everyone available at that time has to help quickly process the dough.

Even when you do everything right, you’ll still get blown dough occasionally—for example, when your cooler goes down during the night. Then all you can do is clean up the mess and use your emergency dough formula!

The late Tom “The Dough Doctor” Lehmann was the director of bakery assistance for the American Institute of Baking (AIB), a longtime contributor to PMQ and a beloved and respected consultant to the pizzeria industry. This article originally appeared in the March 2018 issue of PMQ Pizza Magazine.