Danger, Will Robinson? As Robotics Improves, How Will It Affect the Pizza Biz? - PMQ Pizza Magazine 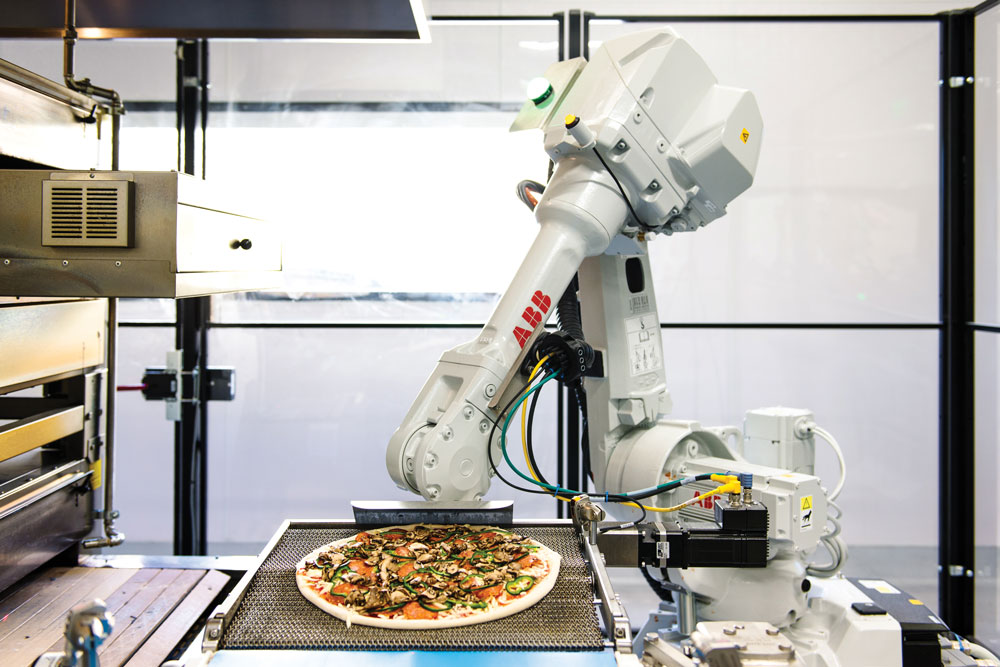 Automation, robots and artificial intelligence are making inroads into the pizza industry—and changing it in unexpected ways. Never mind Domino’s and Pizza Hut—retail chain Costco, which has pizza serving food courts at most of its 482 domestic locations, has been cited by Business Insider as one of the nation’s largest pizza chains, with its dough presses, sauce dispensers, equal-slice cutting guides and automated kiosks helping push out a product that customers want.

Costco certainly isn’t the only one using technology to reinvent the pizza business. Little Caesars has not only rolled out web-connected Pizza Portals—heated, self-service pickup stations that let mobile-order customers avoid human interaction entirely—but has also patented a robotic “apparatus…for assembling pizza,” which adds sauce, cheese and pepperoni to a crust. Similar developments are happening in the fast-food industry, where the international chain CaliBurger, based in Irvine, California, has adopted a robot called Flippy. In addition to flipping burgers, the food bot is on track to grill onions and toast buns. And don’t forget Pizza Hut and Domino’s, with their headline-grabbing efforts at automating pizza production and delivery through driverless vehicles and drones.

Even third-party food delivery services have been exploring the possibilities of high-tech automation. Back in 2017, DoorDash began testing robot delivery in several cities, including San Francisco and Washington, D.C. The robots use LIDAR, the same technology found in self-driving delivery vehicles. The company is also exploring other ways to improve food delivery. “We’ve always said that delivery operates at the intersection of a math problem and a human problem,” says Stanley Tang, DoorDash’s co-founder and chief product officer. “In that spirit, we’re constantly testing various ways to make deliveries faster. From machine learning and artificial intelligence to drones and electric bikes, we know that innovative technology paired with DoorDash’s top operations can help decrease delivery time, increase efficiency and improve quality.”

If the top three players in pizza are taking steps toward automation, where does this leave more traditional pizzerias? Of course, it ultimately comes down to the individual shop, but even small chains and independents may find that the bar to adoption of automation is lower than expected—and falling rapidly. Multiple studies show a significant and steady fall in prices of industrial robots since at least the 1990s. “Over the past 30 years, the average robot price has fallen by half in real terms, and even further relative to labor costs,” says Jonathan Tilley of McKinsey & Co., a leading global management consulting firm in New York. “As demand from emerging economies encourages the production of robots to shift to lower-cost regions, they are likely to become cheaper still.”

In a March 2018 story about Flippy, NPR reported that the robot costs about $60,000 per unit. Although that’s a lot more than your average fast-food burger chef makes annually, Flippy could start paying for itself within a few years.

So it’s no surprise that smaller outfits like CaliBurger are looking to automate. Is it the same in the pizza industry? Some manufacturers have already started building robots with pizza in mind. While Zume Pizza, a delivery-only restaurant in Mountain View, California, gets the credit for putting robots partially in charge of making their pizzas, it’s the people at ASEA Brown Boveri (ABB Group) who build them.

“Over the past 30 years, the average robot price has fallen by half in real terms, and even further relative to labor costs.”
— Jonathan Tilley, McKinsey & Co.

Nicolas De Keijser, assembly and test business line manager at ABB Robotics, agrees that robots will continue to become more affordable and useful. “Due to more advanced technology and demand driving higher volumes, the cost of robots has come down in the last 10 to 20 years,” he says. “We now see that a lot of development is going on to make robots more capable and easier to use, with technologies such as lead-through robot teaching, machine learning and computer vision. It’s these advances that will be the main contributors to the increased affordability of the deployment and engineering of automated manufacturing solutions in the future.”

De Keijser is describing a new generation of smarter, safer robots different from the current generation of single-purpose food bots found at innovators like Zume. While those robots work on the same line with humans to make pizzas in a so-called “cobot” environment, their limited awareness of their surroundings means they can inadvertently injure anyone who gets too close. For this reason, while humans partner with robots to customize Zume’s pies, they work in separate stations. This lends itself to the conveyor belt-style of production that Zume has adopted.

Savvy pizza experts will recognize a lot of overlap between this approach to production and the kind that goes into frozen pizzas. The real difference is that, while robotic pizza making is fast and efficient, it’s more complicated than conventional mass production. Zume is a pizzeria, after all, and each of its artisan pizzas are made to order with fresh ingredients. Production has to be coordinated with delivery, since Zume’s pizzas are actually baked as they’re being delivered by a fleet of vans specially outfitted with ovens.

Time will tell how Zume’s approach fares, but it’s not the only approach on the market. ABB’s new robot, YuMi, is different. New advances in artificial intelligence make YuMi a multipurpose robot that is safe and smart enough to teach by hand. YuMi is responsive to the human touch—so responsive, in fact, that it’s actually designed to learn how to perform an action through interaction rather than traditional coding.

“Simply put, anyone can now hold YuMi’s arms and move them to relevant positions while using an intuitive tablet interface to register those motions,” De Keijser explains. “With this method, simple programs can be created in minutes with no formal training. Put into context, a pizzaiolo could now easily test out what robot motions are needed for toppings to be spread in different patterns, in the same way as would be done manually. All this [can be done] without having to involve a robot engineer.”

Since YuMi can work safely around humans and perform multiple functions, it fits well in existing kitchens and doesn’t require the kind of space employed by Zume’s robotic production line. YuMi costs less than Flippy, too—as of 2015, ABB was charging about $40,000 per unit.

“Robots work in a way that humans don’t. PAZZI has a constant rhythm, capable of making 120 pizzas an hour. But not just pizzas—perfect pizzas that are always the same.”
— Chef Thierry Graffagnino

Although ABB is one of the largest robotics manufacturers in the world, it’s hardly the only one producing equipment that could be used in a kitchen. Indeed, if anyone knows the culinary arts, it’s the French, so it should be no surprise that Paris-based EKIM was the first to develop a robot that can make a pizza from start to finish with minimal assistance.

EKIM’s robot, PAZZI, consists of three arms that maneuver the dough into a press, add toppings of any imaginable type, and handle a standard deck oven to consistently bake each pizza to perfection. Any pizzaiolo knows this is no mean feat. A variety of factors can make each step tricky and require a lot more than a good egg timer to pull off, to say the least.

No one understands the challenge better than a three-time Pizza World Cup champion, chef Thierry Graffagnino. No one knows more about how PAZZI handles the task, either. Graffagnino trained PAZZI to add toppings with the kind of artful randomness that machines can mimic but not yet imagine on their own.

“I think we could sign up the robot to compete at the World Pizza Championship,” Graffagnino says. “Winning would still be tricky, because there is also the artist’s side of the pizzaiolo. The robot is a robot. He does just what he’s learned, so he doesn’t bring innovation.”

Otherwise, as long as PAZZI has a reliable stock of ingredients and a human being to monitor its progress, the multilimbed robot can produce pizzas faster than any human. “Robots work in a way that humans don’t,” Graffagnino continues. “PAZZI has a constant rhythm, capable of making 120 pizzas an hour. But not just pizzas—perfect pizzas that are always the same. And he can flawlessly multitask. If the pizza doesn’t have the right shape or there is something irregular, it is automatically rejected. A human might think, ‘Ah, I’ll just send it anyway,’ but a robot can’t do that. It doesn’t think.”

PAZZI is so good at its job that it will co-manage its own pizzeria, also called PAZZI, scheduled to open in Paris on May 20. The company envisions installing PAZZI restaurants—each run by a robot and a human being—in busy spaces like airports, railway stations and college campuses.

“It’s a gimmick. It’ll never last.” Skeptics have said this about everything from personal computers to the internet and cell phones. Even Elon Musk learned, to his detriment, that flesh and blood are hard to beat. Just last April, he admitted that he had been relying too much on automation in his Model 3 Tesla plant and had to replace some of his expensive new robots with tried-and-true humans. Will robots really make a difference in pizza kitchens?

In its 2018 census, PMQ asked readers whether they would ever consider having robots in their kitchens. Out of 212 responses, 45% said they might. “In the United States, a lot of people want to have it,” Graffagnino says. “There are even people who would like a master [PAZZI restaurant] franchise in the States. We see the same thing in Europe. We have a proposal from an English group that wants exclusivity for Germany and England. We have received hundreds of requests.”

Depending on how cobot operations like PAZZI and Zume fare, we’ll soon find out whether more pizzeria owners will be inclined to automate their shops or to continue investing in their fellow human beings, warts and all.