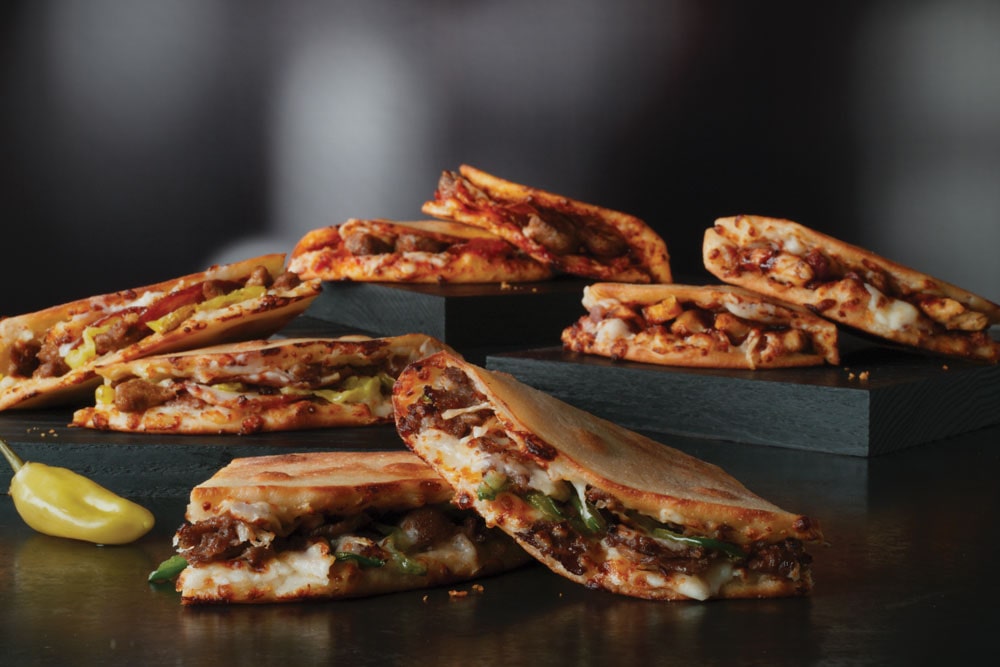 The Papadia from Papa John's is one of the innovative menu items credited with helping the company break new sales records in 2020.

John Schnatter, who founded Papa John’s in 1984 before being ousted as its chairman and CEO about 35 years later, has seldom missed an opportunity to criticize his former company. But if success is the best revenge, Papa John’s must be gloating these days. The once-struggling chain saw its North America same-store sales jump by 24 percent in June while its international sales were up by 6 percent, even as the pandemic continues to wreak havoc on other segments of the restaurant industry.

The same-store sales increase was recorded over a five-week period ending June 28. All in all, the company is predicting a 28 percent increase in North American same-store sales and a 5.3 percent rise internationally for the second quarter of 2020.

The company has also reported that May was the “best sales period in company history,” with 26.9 percent same-store sales growth.

Rob Lynch, Papa John’s current president and CEO, attributed the recent success to innovation. “In June, Papa John’s delivered a third consecutive month of double-digit sales growth in North America and strong growth internationally,” he said in a statement. “The events of the past few months have accelerated Papa John’s transformation into an innovation-driven organization, contributing to our strong business momentum today. This focus on innovation has enabled initiatives like ‘No Contact Delivery’ and Papadias, as well as an exciting pipeline of upcoming products.”

The company also just released a new signature pizza, the Shaq-a-Roni, named in honor of its most famous board member and franchisee, NBA legend Shaquille O’Neal. The extra-large pie features extra cheese and extra pepperoni, cut into extra-large slices. Earlier this year, Papa John’s also rolled out the Papadia, a lunchtime special inspired by the piadina, a folded flatbread sandwich from Northern Italy.

In late 2019, Schnatter slammed Papa John’s, claiming that the board had “destroyed the company.” He also claimed he had eaten 40 of their pizzas in the past 30 days and concluded, “It’s not the same product. It just doesn’t taste as good. The way they’re making pizza is just not fundamental to what makes a Papa John’s pizza.”

Schnatter also ripped into Lynch, who was just coming aboard as CEO at the time. “He has no pizza experience,” Schnatter said, adding, “He doesn’t really know quality.”

But Papa John’s rising sales in 2020 speak loudly in Lynch’s defense. “We entered the pandemic with strong growth and momentum and are fortunate that our delivery and carry-out model has enabled us to meet an essential need for high-quality food, safely delivered to consumers’ homes,” Lynch said.