What a kid wants: How to create a better family-friendly atmosphere - PMQ Pizza Magazine 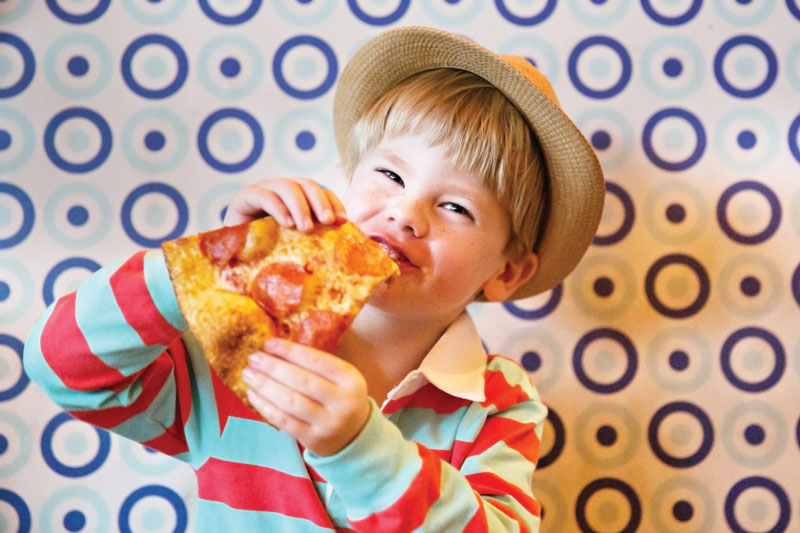 Kids love pizza. No surprise there. In fact, the food-focused youth marketing research organization Y-Pulse confirms that pizza has been at the top of kids’ lists of favorite foods for years. However, while many children are perfectly happy ordering from the grown-ups menu when they go to a pizzeria, most children under 10 years old would still prefer their own special menu, according to Sharon Olson, executive director of Y-Pulse in New York City. “Under age 10, kids usually enjoy the choices on the kids menu better,” she notes. “At 10 years old, they’re about 50/50, and by 11, 12 and 13 years old, they tend to like the items on the adults menu.”

And, just like Mom and Dad, today’s kids have become more discerning diners, according to Jennifer Bilbro, founder and CEO of Out to Eat With Kids in Charleston, South Carolina, a resource for families seeking healthy and economical dining options. “Kids don’t become foodies by themselves,” Bilbro says. “Their parents have made an effort to offer them choices that traditional kids menus don’t provide. If they don’t eat a corn dog at home, then why would they order it from a restaurant? Kids want choices—yes, a cheese pizza option, but also a choice that an adult might normally choose, like a barbecue chicken pizza. Brands don’t have to reinvent the wheel. Instead, think pint-size versions of the adult choices.”

“If you can create unique items that hide veggies, such as calzones that contain veggies, or noodles made out of veggies, that’s a great way to sneak some nutrition into a kid’s menu.”
—Kristin Aquino-Pham, TodFoo

It’s probably no shocker that kids love chicken fingers and macaroni and cheese, in addition to pizza. Those are still some of the most popular kids menu items. But kids don’t always know what’s good for them, says Kristin Aquino-Pham, CEO and co-founder of Atlanta-based TodFoo, a website that connects parents with kid-friendly restaurants. “Kids also have a lot of allergies nowadays, and you don’t want to find out about a new one through a trip to the emergency room. It’s nice to find allergen-conscious, gluten-free and organic options alongside fresh foods that haven’t been microwaved or frozen. And if you can create unique items that hide veggies, such as calzones that contain veggies, or noodles made out of veggies, that’s a great way to sneak some nutrition into a kids menu.”

Kids are also more open to ethnic choices, Olson says. “They like fusion foods, such as taco pizza and cheeseburger pizza,” she says. “It’s two of their favorite foods put together.”

Today’s parents want more flexibility as far as what their children can order, says Jasmine Kafka, director of marketing communications and account services at Kidzsmart in Vancouver, British Columbia, Canada. She recommends highlighting some healthy options—such as kids’ smoothies instead of soft drinks, and applesauce or yogurt instead of French fries. “Offer a two-tiered menu, with one section geared toward children age 2 to 5 and another for kids 6 and older, to ensure that you satisfy both young taste buds and growing appetites, such as chicken strips vs. chicken breast. Kids may not be focused on quality food, but their parents are.”

Bilbro agrees. “Offering only unhealthy choices creates an atmosphere where parents say, ‘We can’t eat there every week, because it’s not healthy.’ Simple changes to your menu can include offering grilled shrimp or chicken instead of a fried version or pushing fruit instead of fries.” Bilbro is also a fan of kid-size salads. “I know you’re thinking, ‘Kids don’t eat salads.’ But they do, especially if they’ve seen a parent or older sibling try one,” Bilbro says. “My daughter orders a Caesar salad everywhere we go now—it’s her thing. But since there isn’t a kid portion size, we end up sharing one.”

Kids enjoy their own special beverages, too, according to Olson. “They like root beer that comes in a bottle, specialty sodas and beverages that go with their pizza,” she says. “They like choices.”

To keep beverages healthier, Bilbro says that offering nonsugary beverages is a huge trend. “We’re seeing new drinks pop up regularly,” she says. “Seltzer or club soda with a splash of fruit juice is a natural way to offer a pop-like drink without the added sugar, and offering ‘half-cut’ options is also becoming popular, from juices cut with water to sweet tea cut with unsweetened tea.”

A kids menu comes in handy in more ways than one, Aquino-Pham points out. Design a menu that serves multiple purposes, and you can create a much happier dining experience for everyone. “A menu that’s also a coloring book with crayons helps to distract kids,” she says. “Coloring books are great for ages two through eight. After age eight, puzzles, word games and board games are popular. Educational menus that teach children where pizza comes from also give parents something to talk about with kids.”

More content is better, Kafka says, as children will usually take an activity book home with them. “Your coloring book will sit at home with the family and be a constant reminder of your brand,” she says. But more content doesn’t necessarily mean more verbiage. “Show, don’t tell” should be your motto in designing a menu that appeals to kids. “Create an interactive menu with images or illustrations of the food to make meal selection easier for younger children who can’t read on their own, and age-segment your kids program to ensure you are capturing the imagination of both the young kids and the older kids,” Kafka says.

“Offering only unhealthy choices creates an atmosphere where parents say, ‘We can’t eat there every week, because it’s not healthy.’”
—Jennifer Bilbro, Out to Eat With Kids

Whatever you do, don’t underestimate this younger demographic. “Try offering something more sophisticated when it comes to content and graphics,” Olson said. “Younger kids tend to follow what older kids are doing, so more sophisticated graphics and simple kid-friendly stories or factoids about where the food comes from or how it’s made could elevate a kids menu and make it more appealing. Many of these kids watch food television and like to know what’s going on.”

Or, if you really want to grab and keep a child’s attention, create a digital menu. “A menu or activity book can be branded toward a specific theme, character or storyline and then integrated with an online app,” Kafka says. “There’s even new technology where you can 3-D- augment some of the print pieces, so the child would open the brand app on their phone, hold it over the top of the printed piece, and 3-D animations pop out.

Even though 82% of 50 top chains report having a kids menu with an average of seven food choices, according to Y-Pulse, many pizzerias get by just fine without one. “You may not need a kids menu if creating one is an operational challenge, doesn’t create a high level of customer satisfaction, or most of the kids coming into your pizzeria are older than 10 years old,” Olson notes.

Jon Schroeter, director of operations at Il Primo Pizza & Wings (ilprimopizza.com), with six locations throughout Southwest Florida, has a bustling family- centric pizzeria, but no kids menu. “I focus on how to draw the kids in and keep them happy,” Schroeter says. “I’d rather have Mom and Dad order a large pizza and 20 wings to share. Our macaroni-and-cheese pizza and boneless wings are also a hit with kids.”

Beyond the importance of great-tasting food, Schroeter believes in creating an unforgettable interactive experience for families with little ones. “We have arcade games, three TVs in the dining room—with one playing a G-rated Disney movie—and Captain Black, a pirate who visits each of my five stores one day per week doing face painting and balloon animals,” Schroeter says. “Parents usually plan birthday parties around when Captain Black will be in the store.”

Il Primo also offers a special $5 package for Kids Night on Wednesdays, where children receive a prestretched mini pizza to create their own pie, a kids cup and a cookie. “We take the same mini pizza doughs on location to local classrooms for pizza demos,” Schroeter says. “And the school principal receives 10,000 free mini pizza cards to hand out to deserving students.”

Schroeter is definitely on to something, Kafka believes. After all, a coloring book and chicken fingers alone won’t guarantee that more families come to your pizzeria. “A restaurant could have a really fantastic activity book, but maybe the service isn’t that great,” Kafka says. “But if you show the kids and the parents that you value them and you put together a really great kids program with engaging and educational content, the parents will go back because the child wants to go back.”