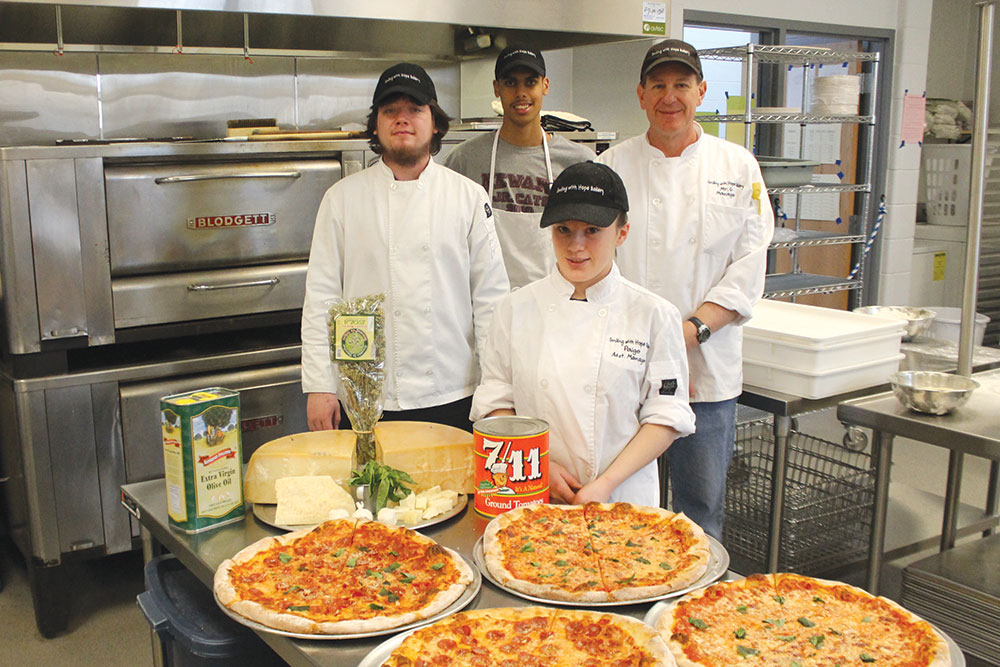 Smiling With Hope Bakery, a small yet bustling operation in Newark, Ohio, isn’t exactly famous for its speedy service or customer convenience. The pizza menu is limited—18” cheese or pepperoni pies only. It doesn’t deliver, and good luck calling in a carryout order—the shop doesn’t even have a phone line.

But, despite the lack of amenities, you won’t regret placing an order with this one-of-a-kind bakery/pizzeria. By all accounts, the food is good, and the cause is even better.

The bakery is the brainchild of special education teacher Walter Gloshinski, a Newark, New Jersey, native with Italian roots on his mother’s side. It’s the culmination of nearly two decades’ work that started on a smaller scale in Austin, Texas, and later moved to Sonoma County, California. The goal, Gloshinski explains, is to “train students with cognitive delays, learning disabilities and emotional disturbances to learn entry-level job skills and find some success in their lives.”

Doing It His Way

Like many artists, Gloshinki has always followed a solitary—some might say eccentric—path. As a songwriter, he created his own musical genre, called “sponto-beat,” making up and playing his blues-based songs strictly on the spot and in the moment, without set chord progressions or lyrics. “Ever since I was a child, I had these visions,” he says. “I just see it all done. It’s like I walk into the movie screen and become the movie. Everything I do is spontaneously created.”

His music took him to Austin and earned him some high-profile fans, he says. “A lot of famous musicians liked what I did. Bob Dylan, Joey Ramone and members of the Rolling Stones were fans of my music and played in my band sometimes. They enjoyed the spontaneity of it all.” But record labels prefer a more structured and polished approach to the craft, and Gloshinski refused to compromise. Instead, he switched gears, went to college and became a special education teacher. “Money doesn’t turn me on,” he muses. “Touching people’s souls and having my soul touched turns me on. That’s my wealth.”

As an educator, Gloshinski recognized that most special needs youths hit a dead end when they leave high school. “There are no jobs for them, no future. But if you can teach them how to do basic work, there are tons of jobs, and they will do great at them.”

Determined to help prepare his students for gainful employment, Gloshinski, who had learned pizza making from family members and friends, eventually started his first student-run bakery at a high school in Santa Rosa, California. After taking a job in Newark, he convinced the school district to build the Smiling With Hope Bakery to commercial code. Otherwise, he was largely on his own and, in addition to training his students in the shop’s day-to-day operations, he had to go out and scrounge up customers.

Over time, he has scored wholesale contracts for his products with local public schools, nearby Denison University and several local government agencies, such as the Licking County Aging Program and the Licking County Department of Developmental Disabilities.

The bakery provides New York-style bagels to Denison and one school cafeteria as well as 10,000 cookies per week to another pair of school lunchrooms. Word-of-mouth has also led to catering jobs and brought in individual customers from the region. In addition to pizza, bagels and cookies, the menu boasts a number of breads, such as Rustic Sourdough, Cinnamon Raisin and Potato Rosemary, plus housemade apple pies, brownies, muffins, pretzels, danishes and cinnamon rolls. “Our bagels are hand-rolled, boiled and baked,” Gloshinski proudly notes. “Our artisan breads are made with real sourdough starters and cooked on the stone. We work with [a local Amish group] and use their 100% organic flour, stoneground by horses, to make our bagels for Denison University.”

Gloshinski developed all of the recipes himself, including the cookies, which meet federal dietary standards for schools. But he’s especially proud of his pizza. “We make them like they’d be made in New York, using all the same ingredients,” he says. “We hand-toss our dough and cook the pizzas directly on the stone in vintage Blodgett 1000 stacked ovens. We import oregano from Sicily and use Parmigiano Reggiano DOP and Romano Pecorino DOP cheeses. It’s a handmade pizza that you won’t find in most of the country.

“I make my dough with ice water,” he adds. “I like what the cold water does with the fermentation. We don’t use any oil or sugar in our dough—it’s just yeast, water, salt and flour. That’s how I was raised. It’s old-school pizza making.”

The pizzas have their own fan base in the Newark community and surrounding region. “We’re in a locked facility on a high school campus,” Gloshinski explains. “We don’t advertise. We’re only open during school hours on school days. We don’t deliver. You have to place your order at least one day in advance. And we’re doing great! We have people who come all the way from Columbus just to get our pizza every week or two, and a lot of transplants from the Northeast have found out about us and eat our pizzas, too.”

Although the Newark school district provides the building space and pays the bakery’s utilities, Smiling With Hope, now in its third year, essentially supports itself, with profits going back into the operation. More importantly, it creates opportunities for youths who might otherwise never get a chance to prove themselves in the workforce. The bakery currently has 18 students on the staff. “We do everything with six special needs kids working 80% of the day and 12 kids who work 20% of the day,” Gloshinski says. “And we’re feeding upwards of 12,000 people a week.”

One pupil, Paige Mossman, blossomed into a highly capable pizza maker, Gloshinski says, and was promoted to Smiling With Hope’s assistant manager before getting a job at Bon Appetit, Denison University’s dining services provider. “They hired her just for her pizza making skills,” he says. “She does everything from food prep to pizza making and serving.” In fact, Paige is one of two Smiling With Hope students now working for Bon Appetit. “They work there after school and on weekends, making $250 a week. They make more than any kid in Newark High School,” Gloshinski says.

Meanwhile, another student landed a job in a local restaurant, handling prep work, washing dishes and busing tables. A fourth student works as a server in a local cafeteria-style dining hall, and another is waiting to reach legal age to become a dishwasher.

Gloshinski is passionate about his work and hopes restaurateurs around the country will take notice. “Most states have some kind of office that provides assistance for developmentally disabled people,” he says. “One of my hopes is that pizzeria owners will read this article and go to their state’s office and hire some entry-level workers. These people often come with job coaches, and their jobs may even be funded by state and federal money for a good while, if not indefinitely. They’re an untapped population of entry-level workers, which can be the hardest ones to find. And once you get them trained, they will be the best employees you’ve ever had.”

Mundane and repetitive labor isn’t a problem for many individuals with cognitive delays, Gloshinski points out. “If something has to be done the same way every time, they will do it the same way every time. My students will be your dishwashers for life, and they’ll love doing it. They don’t care if you keep bringing them more dishes to wash. They don’t come in with an attitude or with baggage. They take as much joy in their work as the president does in running the country. They’ll do it for life and be excited about going to work every day. They feel fulfilled.”

And the students have taught their teacher a thing or two, Gloshinski adds. “Our society thinks people with disabilities can’t go very far. I’ve learned that they can go beyond anyone’s wildest dreams. Just have faith in them and train them in a way they can understand, and they’ll be the best workers you’ve ever had and the kindest workers you’ve ever had. I’ve learned more about love, forgiveness, trust and faith from my students than I ever learned anywhere else. I teach them how to find a job, but they teach me about how to live life from the heart with kindness, honesty and integrity.”