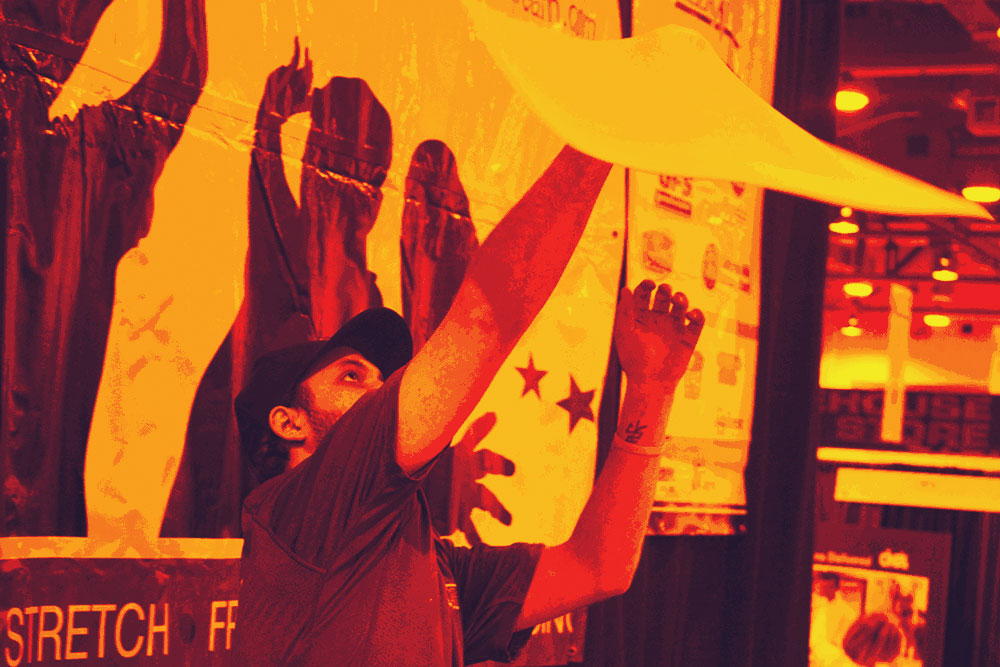 With a pair of $6,000 first-place cash awards at stake, more than 125 pizza makers from across America’s heartland brought their ‘A’ game to the Pizza Pizzazz competitions at the 2014 North America Pizza and Ice Cream Show (NAPICS), held February 9 through 10 in Columbus, Ohio. But the real prize is the glowing media attention and word-of-mouth advertising that comes with the “Best of the Midwest” designation, which goes to only two pizza makers each year in the Traditional and Gourmet categories.

The U.S. Pizza Team also held its Winter Trials competition at NAPICS, with Jamie Culliton of Grimaldi’s Pizzeria (grimaldispizzeria.com) emerging as the winner of the Freestyle Acrobatics competition and earning a free trip to compete in the World Pizza Championship in Parma, Italy.

Owned and operated by the Ohio Restaurant Association, NAPICS is the nation’s largest combined pizza and ice cream trade show. The show attracts 4,000 pizzeria and ice cream shop owners, operators and managers looking for moneymaking products and ideas to boost their sales and profits. This year’s event boasted 175 exhibitors as well as a full slate of seminars and workshops.

The two-day Pizza Pizzazz contest began with the Gourmet category on Sunday, February 9, followed by the Traditional category on Monday, February 10. In each event, a panel of 40 judges evaluated more than 60 pizzas for taste, presentation, crust quality and marketability. Six finalists were then chosen, and first-, second- and third-place finishers won $6,000, $1,000 and $500 respectively.

After earning a spot as a finalist in the Gourmet competition, winner Jordan Henson, manager of Gatti’s Restaurant, nearly missed her turn at the oven in the final round. “Not knowing it was my turn put me 13 minutes behind everyone else,” she says with a laugh. “The others were getting their pizzas out of the oven, and I was like, ‘Oh, no! Now it’s time to grind!’” Despite a late start, Henson’s pizza, the Italian Sub, emerged the winner. Assembled with a mayonnaise dressing base, it’s topped with pepperoni, ham, onions, tomatoes, banana peppers and mozzarella. After baking, it’s garnished with chopped lettuce, and the crust edge is glazed with melted garlic butter. It’s the third most requested pie at the Portsmouth Gatti’s, and its victory in Columbus marks the first time a large chain has won at Pizza Pizzazz in the contest’s 20-year history.

In addition to being a full-time employee at Gatti’s, Henson is a full-time business management student at Shawnee State University. She says she plans to use some of her prize money to pay off credit card debt and treat herself to a new pair of shoes.

Second place in the Gourmet competition went to Cynthia Hamlin of Capone’s Pizzeria (caponespizzeria.org) in Parma, Ohio. She claimed $1,000 for her Chicken Bacon Ranch Pizza. Jason Samosky, the owner of Samosky’s Homestyle Pizzeria (samoskyspizza.com) in Valley City, Ohio, earned $500 for his third-place Spinachi pizza. Samosky is a past Pizza Pizzazz winner and multiyear finalist.

As executive chef of Shorty’s Pizzeria, Shawn Dugan won the Traditional category on only his second attempt. Competing against 63 pizza makers from independent and chain operations, Dugan triumphed with the Manzo Primo, which combines pepperoni, capicola ham, housemade sausage and candied smoked bacon. A graduate of the culinary program at Hocking College in Nelsonville, Ohio, Dugan got hooked on authentic pizza during an internship in Italy five years ago. “The pizza in Italy ruined me on what we had back here,” says Dugan, who operates Shorty’s with his dad, Brien Dugan, a hotel and restaurant veteran. “When I got back to America [in 2010]…I started talking to my father about opening up our own restaurant.”

Dugan finished seventh in last year’s Pizza Pizzazz competition; he says some pizza topping upgrades made the difference in 2014. “We upgraded the cheese we were using to Grande, and we’re now using bacon that’s smoked over corn cobs,” he says. “I’d never heard of it, but then we tried it and I thought, ‘That’s by far the best I’ve ever had.’ I really think those changes pushed us over the top.”

Runners-up in the Traditional category were Jason Hague of Bada Bing Pizzeria (badabingpizzeria.com) in Springfield, Ohio, who captured second place with his Goombah pizza, and Hamlin, who won third place for her Capone Classic.

The “Best of the Midwest” award can reap a sales bonanza back home for pizzerias. “It’s a real source of pride for these pizza makers to achieve that distinction,” notes NAPICS chairwoman Ann Reichle, owner of two Angelina’s Pizza (angelinaspizza.com) shops in Ohio. “It also means a lot to their businesses because of the long-term sales impact. We have pizza makers tell us about people driving two hours to try their winning pie. That says a lot about the excitement surrounding this contest.”

Gearing Up for Italy

This year’s NAPICS event also spotlighted the U.S. Pizza Team, which held its Acrobatic Trials and came away with three new members. Events held at the trials included Freestyle Acrobatics, Largest Dough Stretch, Fastest Pie Maker and Fastest Box Folder. Everyone who placed in the contest earned a spot on the U.S. Pizza Team, but only one—Jamie Culliton—was awarded the grand prize of an all-expense-paid trip to Italy.

Jarrod Clabaugh, director of communications for the Ohio Restaurant Association, and Brian Hernandez, PMQ’s director of operations, contributed to this report.