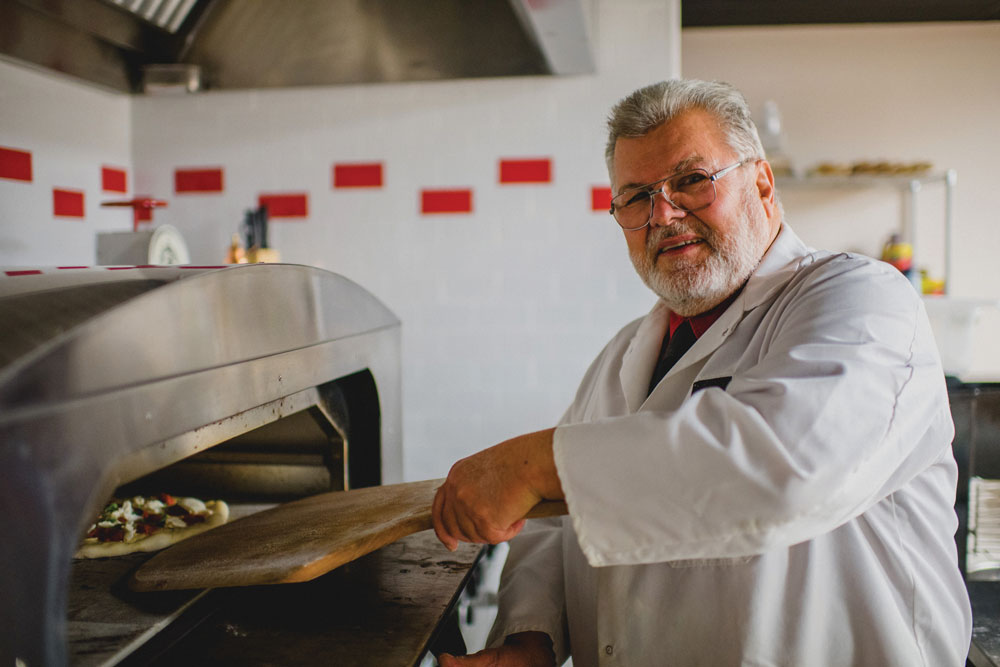 Tom “The Dough Doctor” Lehmann passed away on Saturday, December 12, after a lengthy battle with COVID-19.

Recalling Tom’s life and unparalleled contributions to the pizza industry, a famous quote by Sir Isaac Newton springs to mind: “If I have seen further, it is by standing on the shoulders of giants.” Tom was, like Newton, a scientist, with an almost encyclopedic knowledge of the chemistry and physics that underly the dough making and baking processes. And in our industry, he was a giant. It’s safe to say that countless pizzeria owners and pizza chefs have gotten far in this business by standing on Tom’s shoulders.

Read our January 2015 cover article on the Dough Doctor titled “Born to Bake: Tom Lehmann Has the Cure for Whatever Ails Your Pizza “

As the director of bakery assistance at the American Institute of Baking, it was Tom’s job to solve and help the layman understand the mysteries of flour, dough and fermentation. His tenure at the AIB lasted nearly half a century, from 1965 to 2014, during which time he developed new programs, taught numerous classes and seminars and consulted for foodservice clients around the country.

Tom got paid, of course, for his hard work, and no one ever did it better. But it wasn’t all about money for him. Starting with PMQ Pizza Magazine’s first issue, he contributed hundreds of columns and articles about dough and never charged us a penny. As his busy schedule allowed, he was also a frequent contributor to our Think Tank forum, answering users’ questions about everything from baker’s percentages and par-baking crusts to cross-stacking dough boxes.

Additionally, he traveled several times to PMQ’s office in Oxford, Mississippi, and sat down for interviews, recipe videos and photo shoots. Always easygoing and friendly, he patiently answered every question we posed to him and tirelessly endured the ofttimes frustratingly slow process of setting up cameras and lighting, tinkering with microphones and running soundchecks. When he wasn’t speaking to the camera about pizza dough, he delighted in regaling us with corny humor, the cornier the better, smiling that winning smile all the while.

After he retired from the AIB, Tom continued writing his columns for PMQ (he never missed a month) and advising and helping PMQ’s readers. And, again, he did it all for free. He didn’t have to do it. He did it because he loved it and because he genuinely cared about the success of each and every pizzeria owner who reached out to him. Whether you ever met him or not, if you were a pizza operator, Tom Lehmann was your loyal and trusted friend.

Burly and barrel-chested, smart and strong, he remained physically active and mentally sharp in his so-called “retirement” years. He seemed damn near indestructible. But none of us are that. Even so, Tom left us too soon. It’s hard to imagine the pizza industry without him. It’s hard, in fact, to imagine the pages of PMQ without him. We are deeply and forever grateful for all that he did for our industry. And our hearts are broken by the loss.