Born to Bake: Tom Lehmann Has the Cure for Whatever Ails Your Pizza - PMQ Pizza Magazine 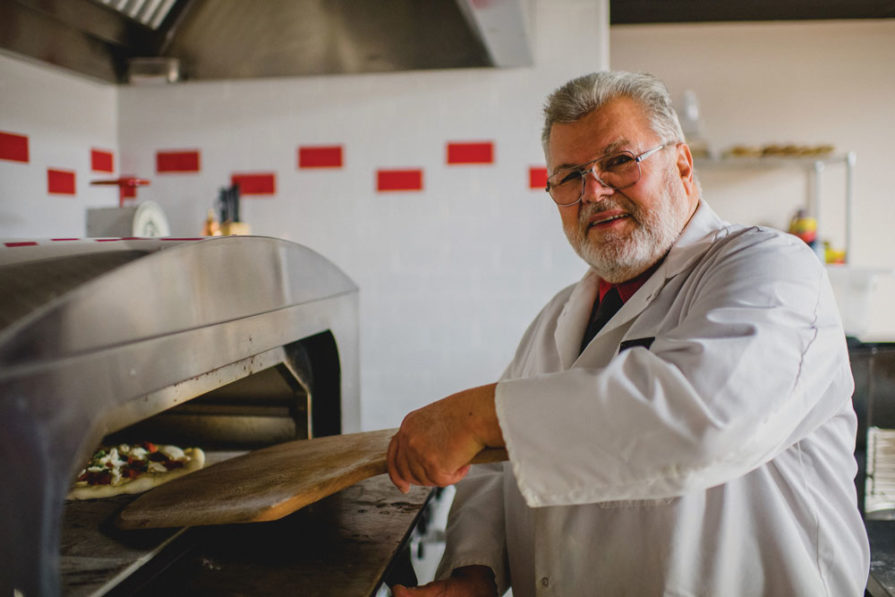 Tom Lehmann was just a fresh-faced high school kid in Chicago when he discovered—quite by accident—his life’s calling. For his senior year, he thought he’d signed up for a course in world economics, but when he arrived for the first day of class, he was the only male in the room. It was, in fact, a home economics class, a course most boys shied away from. “At first I felt like an idiot,” he recalls. “But I soon came to the realization that I was the only boy in a class of nearly 30 girls. I thought, ‘Hmmm, this might not be too bad after all.’”

As screw-ups go, Lehmann could not have made a better one. In addition to meeting new girls, he discovered that dress patterns could be used to make car seat covers and that baking was cooler than he’d ever imagined. “In those days, students in home economics learned how to plan and prepare healthy meals, and that included baking,” he says. “We baked cookies, breads and rolls. This was the spark that ignited my lifelong interest in baking. If not for that, I might be making seat covers for cars today, and this conversation would never be taking place.”

Call it fate. Call it destiny. Call it what you will, but Lehmann was clearly born to bake. Known far and wide today as “The Dough Doctor,” he has become one of the country’s leading experts on pizza dough and pizza making. He is the industry’s go-to man for all problems related to dough, and his solutions are backed by decades of hard science and research at the Manhattan, Kansas-based American Institute of Baking (AIB). Now, the recently retired Lehmann is a free agent, a consultant-for-hire with a genuine passion for teaching his craft—and for helping pizzeria operators improve their recipes and sell more pizzas.

From Pizza Fan to Baking Scientist

Readers of Lehmann’s longtime PMQ column, “In Lehmann’s Terms,” may get the impression of a sober-minded technician in a white lab coat, tirelessly analyzing the biochemical properties of yeast and the role of microbes in enzyme degradation. Lehmann can and will explain that kind of stuff in great detail until your head starts spinning—he has a ready answer for just about every dough-related question. “I am a scientist,” he says. “I make no bones about it.”

But The Dough Doctor isn’t all business. Affable, chatty and quick to smile, Lehmann is also an avid outdoorsman who’s just as happy in a deer stand as he is in the kitchen. He likes a good joke and loves a bad one—the worse, the better. “My oldest son, Jerry, and I like wordplay, and every once in a while we really get into it, leading to groans from everyone present,” he says with a grin. “Come to think of it, that was a pretty common reaction from my fellow staff members at AIB.”

He also has a lifelong love for pizza. As a kid, his favorite pies came from Ed and Joe’s Pizzeria (ednjoes.com) in Tinley Park, Illinois, the Chicago suburb where he grew up. “When I was about 12 years old, I liked pizza so much that my parents would conveniently forget to call me in when my dad brought pizza home for dinner,” he says. “This allowed the rest of the family to get their share before I dove into it.”

After getting bitten by the baking bug in high school and working full-time in a couple of bakeries, Lehmann studied the science behind the craft in a resident program at AIB, then located in Chicago. When AIB offered him a job as a baking technologist in 1965, Lehmann took it and never looked back. Two years later, he found his niche as a pizza dough guru. “The AIB staff used to go to Gino’s Pizzeria in Chicago for lunch,” he recalls. “I thought, ‘Rather than all of us going up there, why don’t we bring Gino’s to AIB? Why don’t we make it ourselves?’ So I set out over a few months’ time to replicate Gino’s pizza, and, lo and behold, we did it. I think that may have been the last time the staff went out for pizza.”

But Lehmann still had plenty to learn. “I discovered that everything I knew about yeast-leavened products—such as breads, buns and rolls—did not apply to pizza. There was a whole separate technology needed to steer pizza. That set me on a quest to identify what that technology really entailed, and it has taken all these years to figure it out and, you might say, unravel that DNA.”

As word of Lehmann’s expertise spread, pizza makers from around the country began to seek his advice. It started with a small frozen pizza manufacturer that was struggling with dough shrinkage. “After a short visit to their facility, I got their problem resolved, and my future as a pizza consultant was cast in stone,” he says. “I began writing about pizza technology and authored a number of AIB technical bulletins on pizza. I soon found myself consulting with independent pizzeria operators and wholesale manufacturers; then came the chains, pizza shows, PMQ, and the rest, as they say, is history.”

“The one thing I find missing in the industry is that people do not have an appreciation for the importance of time and temperature [in dough management].”
—Tom “The Dough Doctor” Lehmann

Tips From the Master

As director of bakery assistance at the nonprofit AIB, Lehmann helped countless pizzeria operators improve their products during a career that spanned nearly 50 years. Whatever your questions may be, it’s hard to stump The Dough Doctor—he has heard them all. And many problems, he says, come down to one thing: dough management. “The one thing I find missing in the industry is that people do not have an appreciation for the importance of time and temperature,” he notes.

So what general tips would Lehmann share with PMQ readers? Just wind him up, and watch him go.

Remember to cross-stack dough boxes. Once your dough balls are made, they begin heating up at the rate of about 1° per hour, Lehmann notes, so they need to be cooled down rapidly. “When you don’t cross-stack those dough boxes in the cooler, you trap in the heat and the dough continues to grow and ferment,” he says. “By the next morning, you open the box up and, rather than finding six individual dough balls, you’ve got one large dough piece. This will not work.”

Don’t add seasoning to your dough mix. “If you do that, you’ve just made 50 to 80 pounds of dough with that one flavor profile,” Lehmann notes. “Now you can only hope every application for which this dough will be used is compatible with that flavor profile. If you want a garlic-flavored crust, buy a garlic-flavored butter oil and brush it on immediately after baking. It will be absorbed into the dough and give you a beautiful shine, and that garlic flavor will really pop from the heat of the crust. You can do that with other herbs, too.”

Add semolina flour for a crispier crust. “If you add a little bit of semolina—up to about 25%—good things happen to it,” The Dough Doctor observes. “You get a little improvement in flavor and a lot of improvement in crispiness.” Too much semolina, however, can hurt the final product, especially for carryout and delivery. Lehmann compares the resulting crust to a Goodyear tire. “We’re talking very tough, very chewy. My advice is to keep it under 50%, preferably 25%.”

Tomato slices make the best sauce. “Just slice up some garden-fresh, ripe tomatoes about 3/16” thick, pat them dry and lay them over the surface of the dough skin,” he suggests. “That makes an excellent sauce.” Whole canned tomatoes or tomato fillets also do the trick. “The visuals are fantastic. Now your customer can see the chunks of tomato, and when you bite into it, you get that burst of tomato flavor. You don’t have to worry about your spice blend being wrong—what spices have we added?”

Create layers of flavors in your pizzas. Too many pizza makers make every bite taste the same, Lehmann observes. “It’s very predictable. I think today’s consumer is looking for something more interesting, maybe a little more garlic in this bite or a little less, so the flavor impact changes with each bite. We call that layering of flavors. It’s not one constant flavor—it’s a constantly changing flavor.”

Lehmann may be retired from AIB now, but his dedication to the pizza business hasn’t waned in the least. Freelance consulting keeps him as busy as ever, only now he gets to pocket the fees himself—and after nearly half a century of working for a nonprofit, it’s safe to say he’s earned that right. But the erudite Dough Doctor is the first to admit he still doesn’t know everything about pizza making. “There’s always something new to be learned,” he says. “I once coined a saying: Fear not the man who knows not everything, but fear most the man who knows everything, for he knows not what he does not know.”
Lehmann often peppers his conversations with proverbs of his own creation, many of which speak volumes about his character and philosophy of life. “The greatest joy,” he likes to say, “does not come from helping someone. It comes from helping someone without being asked.” To which he adds, “The most underused words in the English language are, ‘Here, let me help you with that.’”

One thing’s for sure: Lehmann has helped a lot of pizza makers solve their dough problems and make better pizzas. And he doesn’t plan to stop anytime soon. “I used to have a true passion for learning the technology behind pizza production, but now my true passion is helping others to understand it and to produce quality pizza,” he says. “I also like the challenge of working with the wholesale pizza and pizza crust manufacturers, since their technology is a bit different from retail pizza production. Every problem is a challenge that needs unraveling, and each problem is unique. So I’m always trying to find a solution and learning something new in the process. That’s what makes my life so interesting.”