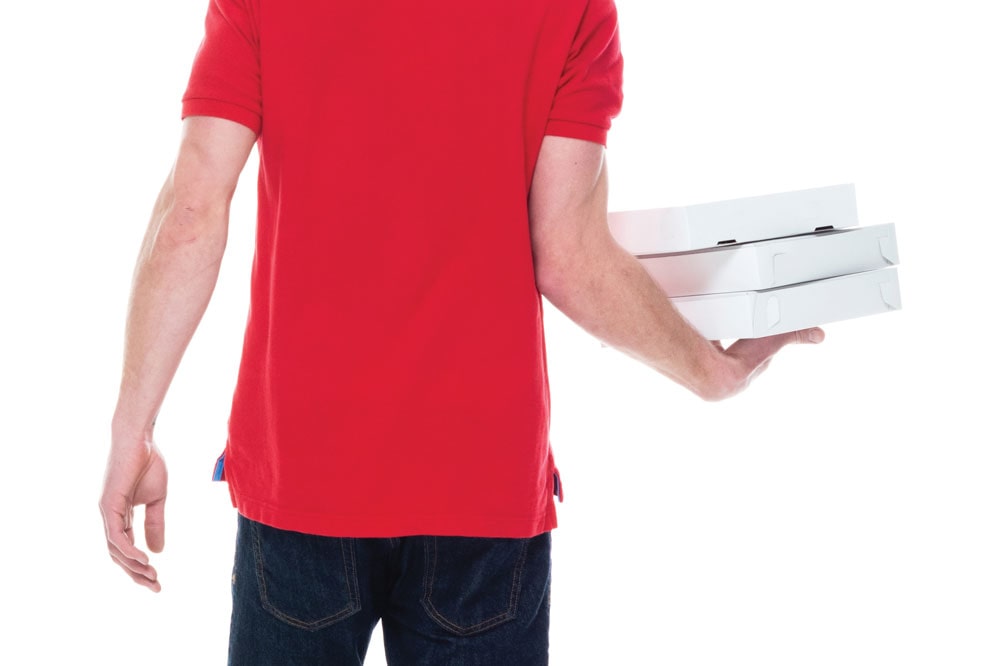 Call it customer laziness, the desire for home comforts, or simply an income-driven dining revolution, but the third-party delivery boom has reached unprecedented levels—and is expected to continue its meteoric rise. In 2019, DoorDash reported that the industry ballooned to $43 billion in 2018 but is expected to rise to $76 billion by 2022. Months later, Forbes predicted growth to $200 billion by 2025.

But in the delivery-friendly pizza world, many operators remain on the fence about trusting these third parties to transport their carefully crafted menu items. Some have nixed the option outright; others have tried it out and reverted back to status-quo operations; and some have hailed these services as a smash success. Here, we look at all angles of third-party delivery through the eyes of operators—the good, the bad and the ugly.

For Walter Gloshinski, owner of Smiling With Hope Pizza in Reno, Nevada, third-party deliveries will never make the menu at his establishment—that is, if he has any say in the matter. “We’re owner-operated, and my wife and I don’t want to turn over our product to somebody we don’t know,” Gloshinski says. “If it arrives cold or half-eaten, customers will get mad at me. These third-party drivers can be people with no food-handling skills or training.”

Gloshinski found himself at the epicenter of a war when two companies, Postmates and Grubhub, posted his pizzeria and menu on their websites without his consent, and customers unaware of the situation innocently ordered online. Unfortunately, getting the mess resolved took months of phone calls to the companies, which prompted Gloshinski to vent his frustrations to the Reno Gazette Journal in 2019. “Drivers would get irate when we told them we’re not working with them, and the menus they post can be out of whack, with old prices, items or hours,” Gloshinski complains. “It’s like the mafia: ‘Move over, buddy, we’re working with you!’ They don’t contact you or enter into any agreement. It’s lawlessness—technology running crazy with no checks and balances.”

“We don’t want to turn over our product to somebody we don’t know. If it arrives cold or half-eaten, customers will get mad at me. These third-party drivers can be people with no food-handling skills or training.”
— Walter Gloshinski, Smiling With Hope Pizza

Gloshinski was further determined not to work with third-party delivery companies after monitoring a local Facebook group of Reno-area foodies (restaurant owners and customers alike), who, he says, frequently light up the board with complaints about these services. Now, his wife, who works the phones at his pizzeria, asks callers straightaway if they are with a delivery service, and he hangs a sign at the door that proclaims “No Postmates.” But he even implicates web giants like Yelp and Google for falsely advertising that he delivers through other platforms. “I check every couple of days to make sure I don’t end up back on these third-party sites,” Gloshinski concludes. “If these services make you money, great—one lunch place here does 3,000 orders a week with DoorDash. And if we lose business over this delivery stuff, so be it. You’ve gotta stand up for what you believe in.”

Fredi Bello, aka Fredi the PizzaMan in Melvindale, Michigan, was willing to take a chance on third-party, since he didn’t already offer delivery. Bello opted to give Grubhub a try, despite the roughly 30% fees charged. He kept the service for less than a year, he estimates, partially because there was a shortage of drivers in his area, leading to erratic pickups (and cold food). “I’d make the order, and the driver would show up an hour and a half later,” Bello recalls. “Then people would complain online, even though it was out of my control. Customers are going to come after me, not Grubhub.”

Bello called the third-party company and explained that he makes the food fresh right away, not at a delay. He was unhappy with the customer service, which required numerous prompts to reach a human being. And he noticed drivers showing up without basics like hot bags in cold Midwestern temperatures, causing the quality of his food to suffer in transit. “For some people, it works, but I would not go through a third-party company now,” Bello says. “I think finding a driver is the better way to go, since you can control that. And you can choose to deliver only in peak times, like 5 to 9 p.m., to minimize that worker needing to be there. That way, you know your driver is there to take the order. Third-party drivers have no commitment to your pizzeria.”

On the other hand, Nicole Bean, president and owner of Pizaro’s Pizza Napoletana, with two locations in Houston, started working with third parties in 2017 and maintains those relationships now. But she hopes to employ her own drivers instead within the next year. She started with a local delivery company called Favor. After realizing her pizzeria was posted on DoorDash without her consent, she sent two cease-and-desist letters, but later ended up working with them, too, as well as with Grubhub.

“They all work very differently from one another,” Bean explains. “The setup is easy, but when it comes to correcting orders, there were some issues. When we started with Grubhub and DoorDash, there were huge benefits—they’d give us a customer’s email, phone number and address—but now, everything goes through them, and we get none of that information. Still, we did get a lot of new customers, including repeat ones who have now become our customers.”

“Sometimes, you’ll get great drivers; others can be unbelievably rude. Some will sip out of a customer’s drink or drop a pizza; some pizzas never get delivered or get delivered upside-down.”
— Nicole Bean,Pizaro’s Pizza Napoletana

No surprise, then, that Bean believes certain types of pizzerias can greatly benefit from the exposure offered by third-party companies—especially those that are still growing their customer base and want to get their name out there to a lot of people. When trying out multiple parties, she recommends running a weekly report to see where the most orders are coming from (in her case, it’s DoorDash).

And, she adds, the services themselves can be all over the map. “Sometimes, you’ll get great drivers; others can be unbelievably rude,” Bean says. “Some will sip out of a customer’s drink or drop a pizza; some pizzas never get delivered or get delivered upside-down. Orders can disappear from the system, or you get the full runaround when calling customer service.” In a perfect world, Bean says, these services would be great, but murky rules and regulations can create dissatisfied operators and clients alike.

For a look at how third-party delivery can prove a massive hit for a pizzeria and restaurant, look no further than Crust in Miami, which now counts Grubhub, Postmates, DoorDash and UberEats on its roster—to the tune of drumming up 22% delivery as part of its $2 million yearly intake. “I would not have delivery drivers of my own at any cost,” asserts owner Klime Kovaceski. “We open at 5 and take delivery orders until 9:30 p.m. It’s terrific.”

At Crust, Kovaceski has nailed the formula with a few key choices: He shuffles pickups from these drivers to the side door, complete with its own dedicated cashier, which leaves his front door unblocked for in-house diners and allows for traffic to flow uninterrupted inside the restaurant. He posts rules at the door for drivers explaining the kind of behavior he expects from them, which, he believes, “sets the tone” for their actions at the outset.

“When you deliver quality, quantity and consistency, it’s fine to charge more, unless you’re already overpriced. If [third-party companies] are taking 30% of the order, you’ll go out of business if you can’t pass those costs to the customer.”

Then, to streamline operations, he blocks the option to make modifications or special requests on any third-party order and deletes the “build your own” pie. On GrubHub, which doesn’t allow this block, each section of the menu reiterates “modifications and substitutions politely declined.” If certain menu items simply will not travel well, he deletes them from the online delivery menus.

Meanwhile, to combat the hefty fees that accompany third-party delivery, Kovaceski’s response was simple: Raise prices for his online menu by 30% over dine-in—and alert online customers about it up front via his website’s home page, where customers click through to the third parties’ sites. Thankfully, Crust’s extra-large portions and reasonable prices make at-home diners feel like they’re still getting a good deal. “If they have to take an Uber here and buy a bottle of wine, it’s still cheaper for them to eat at home,” Kovaceski notes. “When you deliver quality, quantity and consistency, it’s fine to charge more, unless you’re already overpriced. If [third-party companies] are taking 30% of the order, you’ll go out of business if you can’t pass those costs to the customer.”

To combat less-than-ideal experiences beyond his control, Kovaceski points diners to the source, the third-party outlet—but he also overcompensates for anything that isn’t perfect, perhaps sending along a $25 gift card to a disgruntled delivery customer. Additionally, each third-party provider takes up its own tablet at a docking station in Crust, sending orders straight to his Revention POS system and kitchen. And if business heats up on a busy night, Kovaceski is ready to pull the plug on online orders for an hour or two or lengthen estimated delivery times. “We are, first and foremost, a restaurant, and the dining room has priority,” he says. “Overall, success with third parties depends on who you are and how you run your business.”