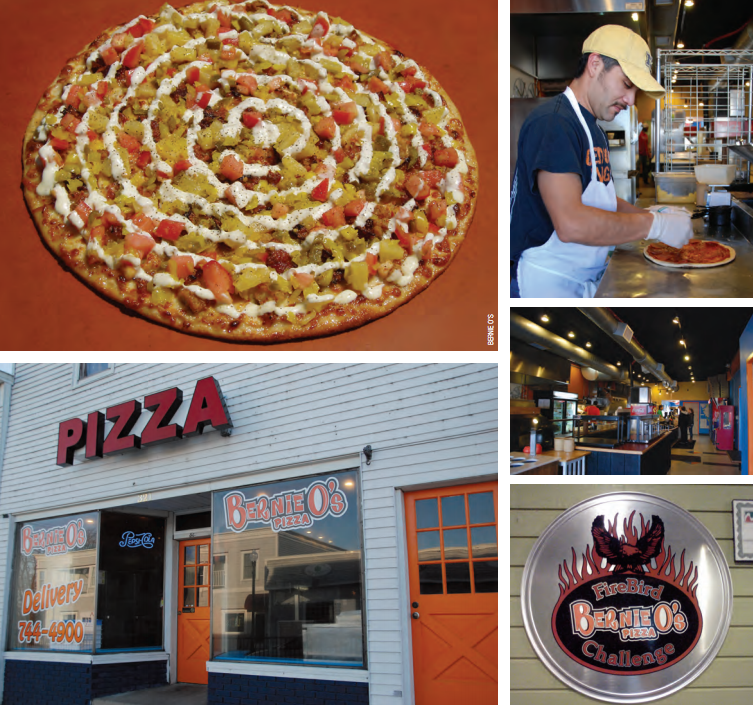 If you heard about a pizzeria that scored 80% of its sales in specialty pizzas with unusual ingredients—think ghost chili pepper infusions and cold fruit and vegetables as “finishing” toppings—you might assume it could only exist in a sprawling metropolis already overrun with standard pizza joints. But in tiny North Muskegon, Michigan, Bernie O’s Pizza (bernieos.com), with its wildly creative and eclectic menu, doesn’t just exist—it thrives.

Best known for its award-winning The Twist pizza, described on the menu as “crispy and chewy, sweet and hot, tangy and savory, creamy and tart, cool and warm,” and for the searing-hot, Food Network-featured Firebird, Bernie O’s puts its unique spin on nearly every menu item. Customers can also order a standard pepperoni pie, of course, but only if they aren’t tempted by one of the many intriguing specialty options.

Founded by Addam and Heather Oliver in 2006, Bernie O’s has taken North Muskegon by storm, winning accolades for Best Pizza and Best Dish at the Taste of Muskegon festival two years in a row. Although a quick glance at the menu confirms that Bernie O’s is an innovative, fun operation, its story, like that of many small businesses, is one of struggles and setbacks ultimately overcome by ingenuity and hard work.

Rising From the Ashes

After taking the plunge and quitting their day jobs, the Olivers worked as caterers for a while before taking over a small, underequipped bingo hall kitchen that caught fire and burned down while they were transitioning to a pizza operation. Years before their pizzas would garner them national attention, however, the Olivers made a Phoenix-like rise from the ashes. They scraped together a little money, salvaged the equipment that survived the blaze and forged ahead with their goal to develop their own unique pizzas and become the state’s best pizzeria. Another tragedy—the unexpected death of Heather’s father, Bernie Ockaski— inspired the Olivers’ restaurant’s name. “Bernie’s tremendous work ethic and strong sense of integrity inspired us not only to not give up, but to aspire to become the greatest pizzeria in Michigan,” Addam says. “To remind us every day of what we were doing and why, we named the pizzeria after him.

Half a decade later, Bernie O’s Pizza is a local treasure with growing national appeal. Despite being located in a small town with a population of about 4,000, the pizzeria has nearly 4,500 Facebook fans, has earned top billing on Urbanspoon and placed in the top three in a New Jersey pizza competition.

Bernie O’s offers a dizzying selection of subs, strombolis, salads and pies, but its most audacious offering, The Twist—featuring a specialty sauce on a thin crust and topped with bacon, chicken and cheese, then baked and finished with pineapple, tomatoes, hot peppers and homemade ranch dressing—outsells all other pizzas on the menu by a three-to-one margin. The addition of cold toppings after baking “gives the pizzas wonderful contrasting flavors and textures, and it’s the contrast that just blows people away and keeps them coming back for more,” Addam notes.

The Olivers stay focused on their customers and their community. They pride themselves on offering a diverse and evolving menu and encourage repeat business by keeping their customers happy. Addam’s philosophy is simple: “Treat every customer like he’s your only customer,” he says, “and act as if there’s a competitor right next door—because there is.” From a “no questions asked” return policy—which has helped patrons muster up the gumption to try new specialty pizzas—to a generous rewards program, Bernie O’s places a high premium on sending diners home with full bellies and happy hearts. The Olivers also make it a point to serve as a positive presence in the community, helping out with school events, fundraisers and other occasions.

Keepers of the Flame

Bernie O’s reputation has spread beyond the Michigan state line, thanks in part to its signature Firebird pizza, a 28” spicy concoction topped with breaded chicken, cheese, ranch, hot sauce, minced jalapeño peppers and ghost chili pepper (reportedly 300 times hotter than a jalapeño) powder. The pizzeria’s Firebird Challenge promotion—contestants must gobble down the eye-watering pie in one hour to win T-shirts, a spot on the restaurant’s Wall of Flame and gift certifi cates—was featured on the Food Network show Outrageous Food in early 2011.

Addam stresses the important role the Internet and social media outlets have played in promoting Bernie O’s. To establish a strong online presence, the Olivers hired a professional website designer and worked to make sure the site accurately reflected the Bernie O’s image. They also see great marketing value in their Facebook page, which allows them to directly communicate with their fans (users who click the Like button on their page) about news, specials and events. Meanwhile, the Olivers utilize directory sites, including Urbanspoon and Yelp, as marketing tools, eliciting positive feedback from existing patrons to generate interest from potential new customers.

Additionally, to stay focused on the pizzeria’s day-to-day operations, the Olivers use a third-party management system to maintain their database, email list and rewards program—a more efficient and cost-effective way to do a job that otherwise would take a full-time staff member on the Bernie O’s payroll.

From the Bruschetta and French Dip to the Memphis BBQ and the ever-popular Twist, lack of pie variety will never be a problem at Bernie O’s. But in the unlikely event that a customer tries and doesn’t care for an item on the menu, the Olivers are always happy to bring out another one. Fortunately, that’s rarely necessary, Addam says, but it’s the kind of guarantee that keeps customers satisfi ed—and hungry for more.

Patrick Riordan is a freelance writer based in Chicago.