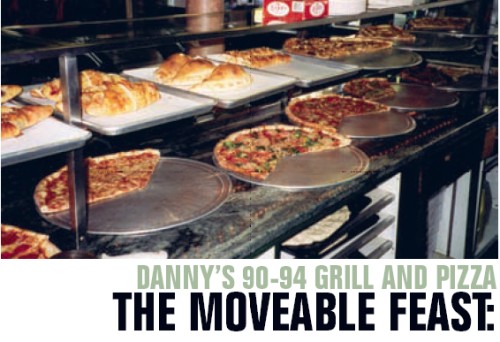 A successful buffet is almost rocket science in that it requires much more thought than simply setting pizzas out under heat lamps. One operator in Wisconsin has embraced the buffet concept in a big way by offering an all-day buffet during the summer months, scaled back to weekends the rest of the year.

"We're in a strictly tourist area," explains Dan Fitzpatrick, co-owner of Danny's 90-94 Grill and Pizza, a 134-seat pizzeria in Lake Delton, Wisc. "We're surrounded by resorts and hotels. We have indoor water parks here, some of the largest in the world. We have a new mega-resort, Mt. Olympus, that offers an indoor water park and roller coasters and a hotel. But Lake Delton itself, combined with the Dells which is nearby, still only constitutes about 3,000 people. It's a small town."

Dan says he and his family (his dad manages the books and the website, mom works the morning kitchen) decided to offer the best buffet possible. The menu is eclectic and extensive. The varieties of pizzas include, BBQ Chicken, Hawaiian, Veggie, and a Garlic and Chicken Club. Six are kept out on the buffet at any given time with two baking during rush hours. Any unsold pizzas are tossed at the end of the day.  The non-buffet items include pork tenderloin, a Rueben sandwich, a four piece chicken dinner, beer-battered shrimp and chicken tenders. Dan reports that the fish items are the most expensive and pasta the cheapest.

"Pizza and chicken are our biggest sellers," Dan says. "We buy our chicken from a fresh chicken program from Golden Plump. We buy their pre-marinated broasted chicken, we bread it and cook it in our pressure fryer then we put it out on the buffet.

"We offer three different types of crusts on our pizza," he continues, "and four different sizes. We have a hand toss, which was our original pizza that we opened with in 1999. In 2001 we introduced a thin and crispy and a deep dish."

A large menu requires a large crew to keep things moving. During his peak season – the summer – Dan says he employs 20 people to run the operation. When school starts, Dan uses around eight employees. The diner's labor costs are budgeted at 22 percent with food costs budgeted at 30 percent. The diner's buffet sales ran around 50 percent as opposed to individual sales during the peak summer months.

"One normal shift is about ten to twelve people and we run two shifts a day," he says. "This year we may be toying with running the buffet during the week starting at lunch, then pit stopping and then reopening it for dinner, but right now it's up for discussion." The diner performs a major switch-over on the buffet around 3:30. The staff breaks it down, then has it back up at four o'clock with a full salad bar, soups, and a variety of pizzas, and non-pizza items including chicken, fish, shrimp and pasta, rice and vegetables.

"The hardest Arial are the lull Arial," Dan declares. "When it's quiet you've got to keep your food fresh and rotated and keep flipping your pans. In a tourist area like ours, in peak season, we don't really have a lull time. But we've found that if people do know that you have an all day buffet, our middle of the afternoon hours are much busier now than they ever used to be. It's helped increase our business between two and four."

Dan says on his buffet table he uses steam from below and dry heat on top. There is no bottom heat on the pizzas and the overhead heaters have to be watched carefully as they can dry food out if items are kept out too long.

As for the costs of buffet tables, Dan says, "They range widely. I deal with Mike Matoska at www.vollrathco.com."

Dan's diner does deliver but it's not a big part of his business, he says. "We have one delivery driver but we don't go any further than three miles outside the store. We sell all the pizzas to the driver who pays for them at the end of the night. We mostly offer it for the tourist trade in the area."

Dan says that the best marketing is having good food that customers refer to their friends in the time-honored tradition of word-of-mouth.

"We focus on word-of-mouth and travel guide books," he says. "Also, there is in-room advertising for the resorts. We did some coupon books last year, but we're going to get out of that. We're going to have a good value price on our buffet and not worry about coupons. This is a heavy couponing town but the customers are already here; why coupon them? We offer all they can eat and they get a free beverage. In our drink area, we have two large Pepsi machines with eight heads on each one with a variety of things to drink plus milk and coffee. We're already at $8.99, it's a great value as it is, and the buffet is all you can eat with a free drink. There's no reason to do a coupon."

Dan assures customer loyalty by being unique. The restaurant is known for a large 1950's-era car that is in the front of his building. The car also figures prominently in the restaurant's website art work. Another of his innovations is the dessert pizza.

"We take our hand-tossed crust, we put apple or cherry pie filling on it and then strudel topping. We bake it and then when it comes out, it gets frosting on the top. We get eight to 12 slices and it eats like a pie. Dessert pizzas are fairly popular in this area. We just developed this last year and put it on the buffet."

Other dessert items include an Oreo Brownie Hot Fudge Sundae with three scoops of vanilla ice cream, hot fudge, whipped cream and Oreo topping. Other sundaes are offered with 15 toppings to choose from including a Caramel Cashew Sundae and a Hot Fudge Pecan Sundae.

The Price is Right

The entire business world has had to deal with exploding fuel costs and certainly the pizza industry feels the crunch dealing with their distributors as well as buying gas for their own delivery vehicles. Dan says he knows from experience that customers will more readily accept price increases – he recently went up one dollar on most of his items – if they know it's done for legitimate reasons. So how did his customers react to the abrupt increase?

"They didn't even notice. It was a non-event. We took a price increase on all our items across the board because we run a full menu. We went up about a buck on everything and it was a non-event. Everybody knows gas prices are going up, everybody knows milk is going up, everybody knows transportation costs are going up. If you do it in conjunction with what is going on in the country, people accept it. We were at $7.99 a few weeks ago and we just raised the buffet price to $8.99."

Raising prices hasn't been the only change at the diner. The diner has been at its present location since 1995. This year the business did a remodel, making the dining room a little larger. With Denny's and other establishments with the words "diner" in the area, Dan and his parents decided to rename their place the 90-94 Grill and Pizza. They also took two old logos and melded them into one common logo.

"We feel like the changes were good for us and helped to more clearly define our brand name," Dan says. Danny's Diner started in Madison, Wisc. and moved to Lake Delton in 1996.  Danelli's Pizza and The Breakfast Buffet were added in 1999. In May 2005, the operating name was changed to Danny's 90-94 Grill & Pizza with a new dining room and expanded buffet.

The all-day-buffet is served daily from Memorial Day through Labor Day. During the rest of the year, it's served on Friday evening, Saturday and Sunday. The buffet starts at 9 a.m. with a breakfast buffet.  At 10 a.m. it is reworked as a brunch buffet and the dinner items are added at 4 p.m.

Running a successful buffet is something of a science that improves through experience; seeing what works and what doesn't. For example, one technique is to check the pizzas on a buffet every 15 minutes or so to maintain freshness.

"There is some trial and error to it," Dan says. "We are very vigilant about our rotating and our quality control. You have to be. If food gets soggy or stale, that can hurt your business quickly. The key is preparation and vigilance. Some of our morning crew arrives at the store at 5 a.m. to meet distributor trucks and to get our baked goods going. There are lots of hours involved and you'll only be successful if you're prepared to put in the time."

Dan Fitzpatrick has put in the time and it shows in his business, his recent expansion and of course, on his bottom line. "We seem to have found our niche here and judging from the positive feedback we've been getting, we must be doing something right."