If you have a bar in your restaurant, it can be a great profit center for you.

It can also be a drain on your profits if you are not carefully monitoring your inventory. Alcohol is a liquid product that can be over-poured, stolen or sold for cash profit by your staff. In this article, we’ll take a look at what you need to do to maximize your sales revenues by controlling your inventory.

I spoke with Robert Plotkin, president of Bar Media, about how controlling your inventory can increase your profits. He says there are six essential business procedures you need to implement:

The best way to keep with all this is to do a physical audit weekly, biweekly or monthly. Robert says it’s best to do it as frequently as possible. "The more frequently you audit your inventory, the more control you’re going to have and the safer your inventory is going to be." After you do your audit, you will know how much inventory you still have. At the end of the month, the balance of bottles is your beginning inventory for the next month. By doing this audit, you are also figuring your liquor cost.

"The best way to gain control of your business is to frequently audit your business," Robert says. "By determining what’s been used and what’s left, you are taking the first steps at preventing internal theft."

Everyone knows doing inventory is a time-consuming process, and a manager is usually the person to do it. Robert says that even here you have to exercise some caution. By having a manager do the inventory, you still run the risk of losing money. Absentee owners definitely run the risk of having management and staff take advantage of them. Robert says this is one of the reasons absentee owners fail so frequently. "If you don’t have a vigilant management, you are setting yourself up for failure."

Here’s an example about why you need to be involved in the audits. Let’s say you have a manager with a drinking problem. The manager is responsible for inventory as well. You tell your manager that they need to audit the bar and liquor room. Well, this manager steals a couple bottles of booze from you and adjusts the inventory to reflect that he didn’t steal anything. If you aren’t active in your audits, you may not realize this is happening. 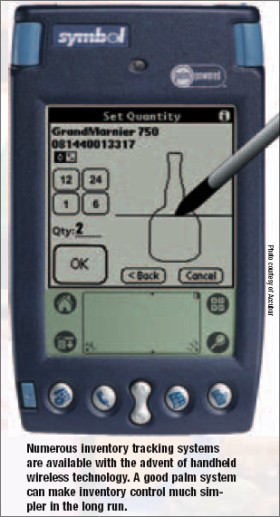 Robert says there is a service that can come in do your audits for you called Bevino. They come in with a laptop and electronic scale and do your audits, Robert says. "The process is accurate to one hundredth of an ounce," he says. "They can tell me precisely how much Johnny Walker Black Label I’ve used between inventories. They compare what’s there to what sales the bartenders ring up. On their reports they will tell you exactly what your cost percentages are, what your actual profits per brand are and what your retail losses. Because they’re an outside auditor, they have no vested interest in how those numbers come out."

Robert also spoke of a handheld device called AccuBar that can help you do your inventory. The AccuBar device is first programmed with all your brands. When you are doing your physical audit, you will look at the bottles at the bar. The image of the product you are taking stock of will appear on the screen. The bottle you are looking at is half empty. You touch the middle of the label on the Accubar screen, and it automatically figures out how many ounces you have left.

I spoke with Dave Grimm, partner and communications manager at AccuBar, about this product. He says the AccuBar comes in with two options. You can buy the PDA device and pay a monthly fee for the Internet based version of AccuBar, which provides you monthly reports. You can also buy the standalone version and have the reports on your computer. Dave said this product can also be used to track your food inventory as well. For more information on AccuBar, go to www.accubar.com.

HOW TO CONTROL INVENTORY AT THE POUR

Robert says there are four ways to deal with dispensing of liquor and making sure you exercise some control.

To protect your inventory, a surveillance camera can be an asset. "It makes it harder to steal bottles out the back door of the place," Robert says. "This prevents the tricks like dropping the bottle into the trash and retrieving it from the dumpster later."

By installing some basic inventory controls in your business, you can cut your bar costs and increase profits. Robert says that with the bookkeeping procedures and implementing some of the pour controls, it’s very possible for you to lower your liquor costs 5 to 10 percent. "What that means is, before you started controlling your inventory, let’s say you were running a 28 percent beverage cost, you can conservatively pick up five points," Robert says. "Five points means for every $100,000 in sales, you’re picking up another $5,000 that would have gone down the drain."