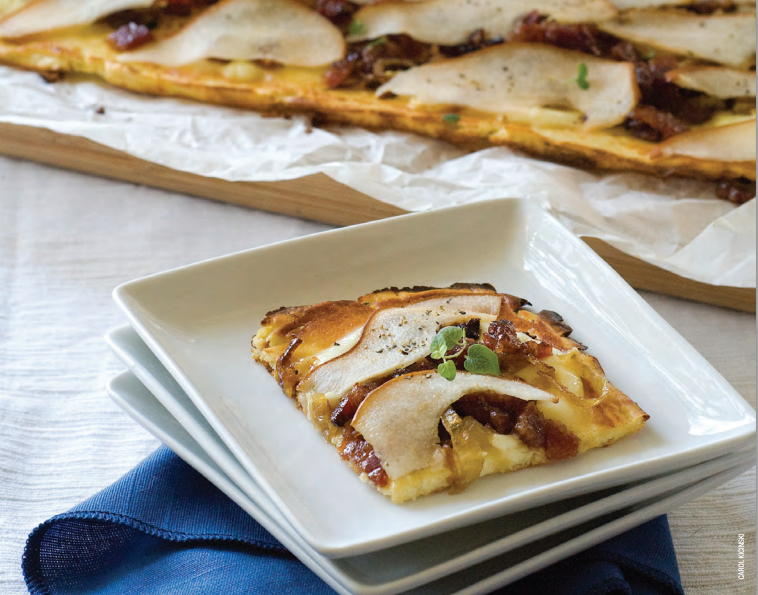 When most people think of pizza, “gluten-free” is not the first word that comes to mind.

After all, pizza embodies what the gluten in flour can accomplish—combined with water, it turns into a stretchy, pliable dough that can be tossed and twirled in the air and still hold together. But for many potential customers, gluten has its downside. An estimated one in 133 people suffer from celiac disease, an intestinal disorder that prevents the nutrients in food from being absorbed by the digestive system. The body of a celiac patient attacks itself when gluten (a sticky protein molecule found in wheat, barley and rye) is consumed. Furthermore, current market research shows that 15% of the population in the United States adheres to a gluten-free diet. And the person with the most restrictive diet in the family or group usually determines where that family or group eats when dining out—for example, few parents will take their children to a restaurant where they can’t eat!

Of course, flour is usually prevalent in pizzerias, and gluten, a very sticky molecule that likes to hold on for dear life, can be found on the counters, pans, peels and ovens. Hence, offering gluten-free pizza alongside regular pizza in an establishment can seem quite daunting.

When my husband (who is not gluten-intolerant) and I go out to eat, we always go to an establishment where I know I can safely order something delicious but gluten-free to eat (and not just salad). One evening I was performing an Internet search with the words “gluten-free” when onto my computer screen popped the name of a restaurant—one that I’d never heard of— that sold gluten-free pizza. The place was located about five miles from us, and, within 20 minutes, we stopped what we were doing, jumped into the car and hightailed it over there. It had been about 15 years since my husband and I had been able to enjoy a pizza together. Not only had that restaurant earned two new customers on the spot, I also texted my son, who is gluten-intolerant, within seconds of biting into my delicious, hot, gluten-free pizza and told him about the place. The text he sent in response read, “Woo hoo!” This tiny pizza place instantly expanded its customer base to include my husband and me, my son, his wife and their friends.

But the story doesn’t stop there. People rarely order just a pizza; they usually order a beverage to go along with it, making the average ticket per person around $15. Even better, most people don’t eat out alone. And remember what I said about groups of diners selecting an establishment where the person with the most restrictive diet can dine safely? The bottom line is that the Boston Pizza chain logged $30,000,000 in incremental sales in 2011 by adding gluten-free pizza options to its menu. Those are some impressive numbers! 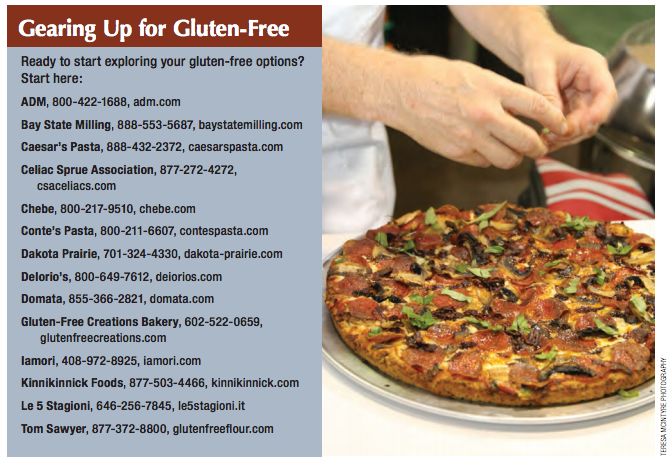 Cross-contamination is always an issue with restaurants that serve both gluten-free and non-gluten-free food. Gluten is easily transferred from one surface to another, which explains why some establishments are reluctant to include gluten-free offerings. Of course, the safety of diners should be of utmost importance to any restaurateur. An establishment that serves food with gluten always poses a risk to patrons with celiac disease or gluten intolerance, but offering gluten-free menu items is all about risk management.

One of the wise decisions that Boston Pizza made: buy premade pizza crusts. The dough is produced in a dedicated glutenfree facility, and the crust is square. By using premade pizza crust, the chain limits the risk when preparing the dough, which has the highest chance of cross-contamination. And the fact that the gluten-free pizza crust is square while the non-gluten-free crust is round makes the gluten-free type obvious to both the staff and customer. Even during a dinner rush, the staff knows exactly which crust is gluten-free, and the customer knows that his pizza should be square.

Some may argue that freshly made pizza crust will taste better than premade, but offering a pizza crust that has been made in a dedicated gluten-free facility dramatically reduces the risk of cross-contamination. And as long as the pizza crust has a delicious flavor, it won’t matter to the consumer that the establishment didn’t make it in-house. It certainly behooves the pizzeria owner to purchase high-quality, great-tasting glutenfree products with the proper texture—customers who follow a gluten-free diet are accustomed to paying a little more for their food in restaurants.

Admittedly, preventing cross-contamination involves more than just buying or making gluten-free pizza crust. Extra care and precautions should be taken when preparing a glutenfree pizza. Preparers’ gloves must be changed, the toppings must be kept separate, and dedicated pans should be used when baking the pizza. And, of course, the pizza cannot be prepared on a surface on which ingredients containing gluten have recently been placed. Some operators solve this problem by using parchment paper. Personally, it gives me a great deal of satisfaction to know that extra care and attention goes into making my food when I dine out. Businesses that keep these rules in mind will find they’ll satisfy their gluten-free audience.

Research has shown that gluten-free consumers are very loyal consumers—they tend to buy the same brands over and over, and they tend to frequent familiar restaurants where they can safely enjoy their food. After all, if they eat gluten, they get sick. I know this is true for myself—when I find something I like that doesn’t make me ill, I stick with it for life! There is no cure for celiac disease or gluten intolerance; the only solution is to avoid gluten, so not only are the gluten-intolerant a loyal bunch of consumers, they will be loyal for a very long time. 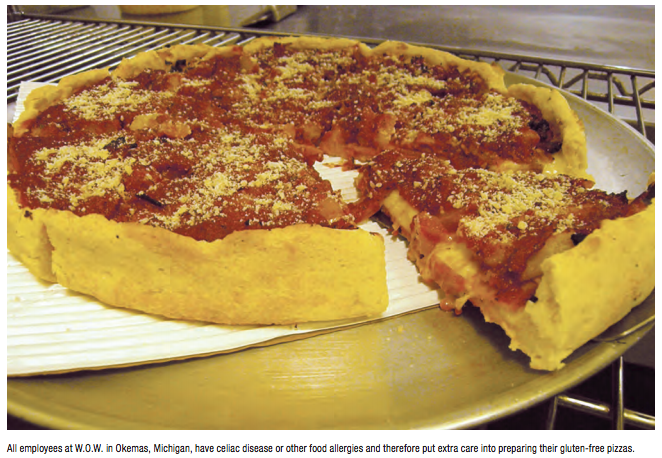 Fortunately for pizzeria operators, the gluten-free community tends to be a chatty group of people when it comes to food. After all, our physical well-being depends largely on what we eat and don’t eat. When I fi nd a restaurant that serves safe, delicious food, I tell others. I have found the same to be true with every gluten-intolerant person I have come in contact with, and I have been in contact with a lot of them. 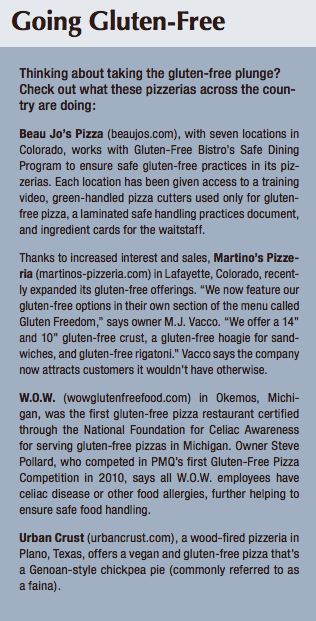 As a group, those of us with celiac disease are conscientious about what we eat and where we dine. Thanks to celiac support groups around the world, websites, blogs and associations dedicated to raising awareness of gluten intolerance and celiac disease, information about safe products and dining facilities is broadly disseminated. When traveling, many celiac patients seek out restaurants with gluten-free menus, creating greater visibility for a pizzeria.

Is gluten-free pizza viable for pizzerias? Since offering glutenfree pizza will likely bring in new—and very loyal—customers who have never frequented your business before, and since the person with the most restrictive diet typically determines a group or family’s dining location, creating a gluten-free menu can definitely boost incremental sales. And who would refuse that?