Remember the story from the Winter 2001 issue about Brooks Pizza of Alberta, Canada and their world record pizza? We told of how breaking a world record could create massive media attention and boost sales. Joe and Patty Keagle, owners of Paul Revere's Pizza in Mt. Pleasant, Iowa proves this claim with the Ultimate Party Pizza; the new Guinness World Record for the largest commercially available pizza. 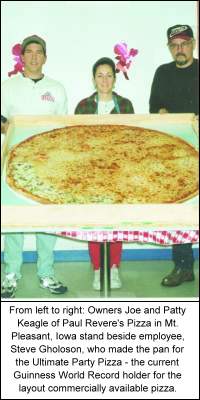 HOW BIG IS IT?

The Ultimate Party Pizza measures 4-ft in diameter and provides 1,814 square inches of pizza. It is made of 170 ounces of dough, 48 ounces of sauce, six to eight pounds of cheese and various meats and cheeses and sells for $99.99. Unlike The Colossal by Brooks, which is square, this one is oval.

WHAT MADE YOU GO FOR IT?

"Before breaking the record, we made a pizza that was 45-inches in diameter. Once we realized we were only 100 square inches from the world record, we were inspired," Joe says. "We wanted a pizza as large as our ovens could make just to prove we could and as a novelty item and morale builder for our employees. Back in 1999, one of our long-time employees, Steve Gholson, made the 45-inch diameter pan for us. We sold the first large pizza to an 'after-prom' party. When we discovered we were so close to the record, Steve cut the pan in half, inserted a 5" x 45" leaf in the middle and we made a world record pizza that was a 45" x 50" oval pie.

"HOW HAS IT AFFECTED REVENUES?

Joe began selling the Ultimate Party Pizza at the beginning of 2001 and received confirmation of breaking the world record May 1. Since January, sales have increased about 15 percent with spikes of 50 – 100 percent. Food costs for the pizza are about 20 – 25 percent based on ingredients ordered. He has sold 28 world record pizzas as of September, has three on order and hasn't even advertised the Ultimate Party Pizza. The primary buyers are churches, Boy Scouts, school parties and industries.

"The media attention has been spectacular, " Joe says. "Of course, the local papers and radio stations have covered it several times, but the state's major newspaper has covered it twice and the leading radio station, 1040 WHO, had us live on the Van and Bonnie Show. We were on CNN, Fox News Network, spotlighted on Good Morning America, featured in several industry magazines and even had a radio station from Florida call us at home to do a live interview. Oh, and our governor sent us a letter of congratulations as well. Our advertising budget has dropped to almost zero."

HOW IS IT MADE?

"It took about 10 pizzas to really get the process down, but it is still an ongoing process," Joe explains. "The very first pizza stuck to the pan, but was still edible. The next few were too light on the bottom and we tried using cornmeal on the crust and beginning with a hotter initial oven temperature (625 F) then dropping it as the pizza cooked. Then we decided to lower or oven temperature to the normal 500 – 525 F and began docking the crust and now we feel we have a very tasty product."

It now takes 15 to 20 minutes to completely cook the pizza at 525 degrees F. They use 64 ounces of Paul Revere's private label pizza sauce, six to eight pounds of Leprino cheese and 170 ounces of dough. Their boxes are made by Big River Box Company in Keokuk, Iowa and the pans were made by their employee. They use Bakers Pride Y800 ovens with cooking area dimensions of 45" x 60".

OTHER ADVANTAGES TO MAKING A WORLD RECORD PIZZA

"The advantages of setting a world record is a sense of accomplishment, not only for us the owners, but our staff also," Joe says. "They worked hard to make sure it worked out and they are the ones who have made changes in order to make this a commercial item. Of course, the media attention and visibility in the community has been great. Most everyone knows us now."

There are some disadvantages, too. Joe says time and inconvenience of producing one when the customer wants it is a slight disadvantage. When they can, they make them late on Friday or Saturday nights, which puts a lot of extra work on the staff. It requires its own roll out and topping area and two people to put it in the ovens, remove it and deliver it. Other things that can create problems are letting people know we require 24 hours advanced notice to make one, they must pre-pay for it and have a place, such as a garage, to have it delivered.

"If there is any advice to give, it is to truly set your mind to the end product and don't let anyone say it can't be done. There were more than a few skeptics who thought we couldn't do it. Also, don't do it for profit or fame, do it to push yourself and do it for your community." Check out his web site dedicated to the Ultimate Party Pizza at http://www.ultimatepartypizza.com .

Sales for the Colossal still rising

Back in the Winter 2001 issue, we told you about Brooks Pizza 2-for1, Ltd. first setting the Guinness Book of World Records for the largest commercially available pizza. In that article, we provided sales statistics for the Colossal. At that time, Jeff Parker stated he sold 46 Colossal pizzas in the month of October, which was when he was inaugurated into the Guinness Book of World Records. Well, here is an update on what has happened since then. 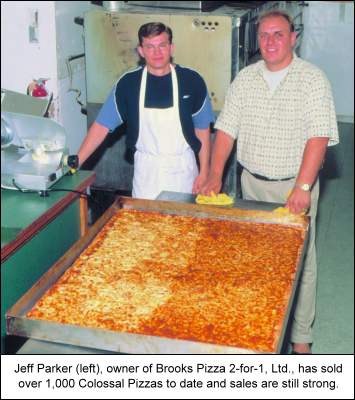 Brooks has sold over 1,000 Colossal pizzas. At that time, he was selling an average of 11 Colossals per week and now he averages 15 to 20 per week. Jeff says this results partly from the media attention, but mainly from his marketing. He said he has been heavily involved in community and charity events, which has netted several radio broadcasts. He has also started promoting the pizza online. He has the history and how the Colossal is made online along with online ordering capabilities, which he launched at the beginning of May. Jeff also has expanded his delivery area for the Colossal to include all areas of Alberta, which in some cases requires up to eight hours of delivery time. He is able to do this with the help of delivery bags created by Thermal Bags by Ingrid (www.thermalbags.com, rsc#125).