Taking it to the streets - PMQ Pizza Magazine
Marketing 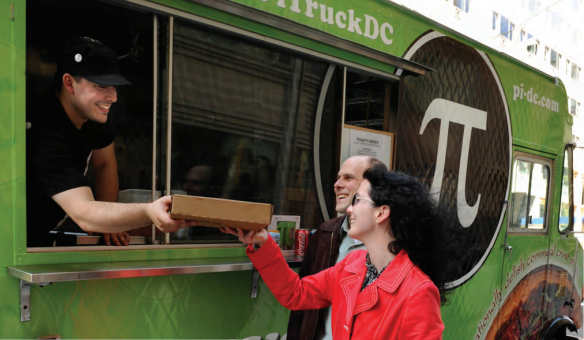 There’s no doubt about it: Food trucks are hot! And pizza, ever profitable, has gone mobile to keep up with the trend. With consumers searching for a lower price point in recent years and more chefs and caterers looking to the open road for culinary ventures, combined with the explosion of social media, street foods are reaching a broader demographic than ever before. Even the media has taken notice, with shows such as the Food Network’s Great Food Truck Race and the Travel Channel’s Food Wars; the food truck experience—once a quick stop for a foil-wrapped meal—has become primetime entertainment. In cities such as Dallas, New York, Los Angeles and Washington, operators are taking to the streets in tricked-out mobile kitchens to build a name for themselves and, in some cases, make big profits. In 2008, Roy Choi, a pioneer of the gourmet food truck movement and founder of the Los Angeles based Korean barbecue truck Kogi BBQ, hit the streets with only two trucks and a Twitter campaign and brought in $2 million his first year!

However, trucks aren’t solely chef-driven anymore—chains are emerging in the game. Industry consultant Aaron Noveshen, founder of San Francisco-based firm The Culinary Edge, estimates that 10% of the top 200 national restaurant brands will have food trucks on the streets by 2012. Los Angeles-based California Pizza Kitchen (cpk.com) and Whitewater, Wisconsin-based Toppers Pizza (toppers.com) have joined the mobile pizza game in the past year. They may be among the first of many pizza chains looking to join the mobile scene, because as Hudson Riehle, the National Restaurant Association’s senior vice president of the research and information services division, points out, the emergence of high-end food trucks is “definitely not a fad,” but an “evolving of the industry.”

To get the lowdown on the mobile kitchen business, PMQ tracked down operators and manufacturers who had the foresight to realize that with the right product and the right marketing, the streets are lined with dough. 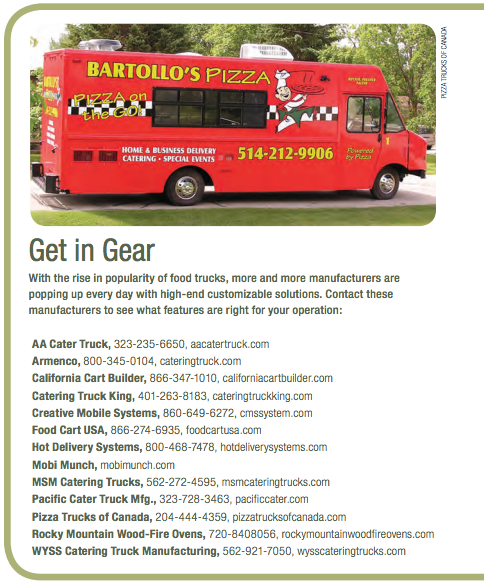 Social media has taken food trucks to a new level in marketing and profitability. For most restaurants, Facebook reigns supreme because of the depth of content and interaction that posts allow, but in the mobile food truck business, operators point toward Twitter as the most useful social media tool, because the rapid-pace website allows followers to monitor food truck locations and specials. St. Louis based Pi Pizzeria (restaurantpi.com), known for its cornmeal crusts and rich sauces, provides a shining example: With two trucks—one in St. Louis and one in Washington—operator Chris Sommers has accrued more than 5,000 Twitter followers combined and says, for him, social media has essentially replaced press releases. “I don’t know why anyone operating a mobile truck wouldn’t use Twitter,” says Sommers. “We do this to try to push people to our social media presence to get them to know what we’re about.” In fact, Pi’s social media presence—which supports the businesses’ environmentally conscious message—has attracted not only sales but media attention. In addition to favorable reviews in local, regional and national publications, including The Washington Post, Sommers received the opportunity to prepare a pizza meal for the Obama family in 2009. Thanks to social media efforts, both trucks sell out almost every night and are in the running to appear on season two of The Great Food Truck Race.

While alerting customers to your truck’s whereabouts is essential, pizza truck operators who’ve found success claim that entertaining customers with social media is just as important as selling pizza. This philosophy is shared by the owners of Milwaukee-based Streetza (streetza.com). This two-man operation hit the road in May 2009 with a converted ice cream truck; now, with 7,000 followers on Twitter, the owners plan on expanding to five cities within the year. This duo let social media drive their major business decisions in the past two years: Their logo, menu and prices were determined by social media interaction with customers. Last March, they were named the No. 1 food truck in the United States by Business Week and were nominated to appear on season one of The Great Food Truck Race. “What we try to do differently with social media is engage people personally,” says cofounder Scott Baitinger. “We found our accountant and our HR company on Twitter. When the truck broke down, we tweeted that we were looking for a diesel truck repairman, and we found one in about 15 minutes.” Food trucks are chatty places in general, and Baitinger recommends incorporating elements of everyday life into your social media feed: Take TwitPics and quote interesting people and happenings in addition to listing specials and locations.

The advantages to mobile kitchen expansion go beyond increased sales and social media promotions. If you already have a successful restaurant and/or have the means to operate out of a commissary, it’s a low-overhead way expose your brand, gauge neighborhoods for potential growth and even taste-test new recipes, explains Ray Villaman, president of Mobi Munch, a company based in San Francisco that helps operators design and lease food trucks and provides training for mobile unit owners. “We’ve noticed a lot of people need help with social media, licensing, operating out of a commissary, repair and maintenance,” he explains. “Most folks need some guidance to learn the ins and outs of the business.” Villaman added that the mobile business has come a long way from the “roach coaches” of the 1970s that catered to passersby and construction crews. Some of the most valuable mobile exposure comes from operating mobile kitchens in controlled private environments, such as festivals, university campuses and parks, and through catering events. “There’s a ton of nontraditional space out there where you wouldn’t build a brick-and-mortar store,” he says. “Companies are racing to these places to make a profit.”

If you think you’ve got the knowledge and financial stability to go into the mobile business, there’s virtually no limit to what you can do on four wheels. Since July 2010, in Beverly Shores, Indiana, husband-and-wife team Andrea Georgian and Jim Chaddock have unleashed a customized 1949 Studebaker fire truck called The Rolling Stonebaker (rollingstonebaker.com), which has a wood-fired oven that burns at 900˚ and cooks a 10’’ pie in approximately 60 seconds. They’ve found their best success with catering and special events. “The truck has a lot of character,” Georgian explains. “When we pull into a private party or a festival, it adds a little ambience. So far, the truck alone has been a huge draw.”

While the Stonebaker has a classic appeal, most need a helping hand in designing the right truck for their business, and the process can take several months, explains Steve Moynes, owner of Pizza Trucks of Canada. “Before anyone spends a cent, I always remind them to get the health departments involved, because you’ve got to have your truck designed to specific standards,” he points out. “You’ve got ovens and refrigeration space to consider; the sinks have to have a certain water capacity; the serving windows have to be in the right place. It all has to be planned out.” The menu and offerings are also important to your design. If you want to make your dough in the truck, you’ll need space for a mixer. If you’re serving by the slice, you’ll need equipment to keep the pies warm. You can’t just throw a few pies on a menu and hit the road, says Bernie Pfeiffer, owner of Hot Shot Delivery Systems—your food must draw attention. “You’re limited in your cooking ability because you’re in a 16’-to-24’ truck; you’re not going to be able to sell 80 different items,” he explains. “So your menu must be intriguing.”

Nonetheless, marketing your food truck can go beyond social media and a creative menu. If you have a presence in a public space such as a park or a baseball field, other creative methods are effective at drawing a family crowd. Michael Peña, co-founder of Taste-E-Tunes.com in Austin, Texas, embarked on a new profession selling royalty-free pizza oriented music to pizzerias when he found his pizza trailer excelled with a little musical ambience. “I was selling pizza by the slice, and it seemed like people needed a little motivation,” he explains. “When I realized there were tons of songs about pizza, I hooked it up, and people really responded to it. The music has a PG quality that targets families. Parents would come up and say, ‘You know, that’s really great marketing.’”

While food trucks have been around for decades, never before has the potential for their growth and profitability been so high. If you’ve already decided to take your operation mobile, take a tip from successful operators and develop a social media strategy that not only promotes sales but engages your customers and community. If you are looking to hit the streets, but want to concentrate more on your menu, search for a company that can help equip and train you to succeed in the business. But if you’ve got a special vision, make sure you hire a manufacturer that you can trust and help guide you through the proper steps to make sure your rig is up to code and ready to roll on for your new quest as a pizzaiolo on the open road.