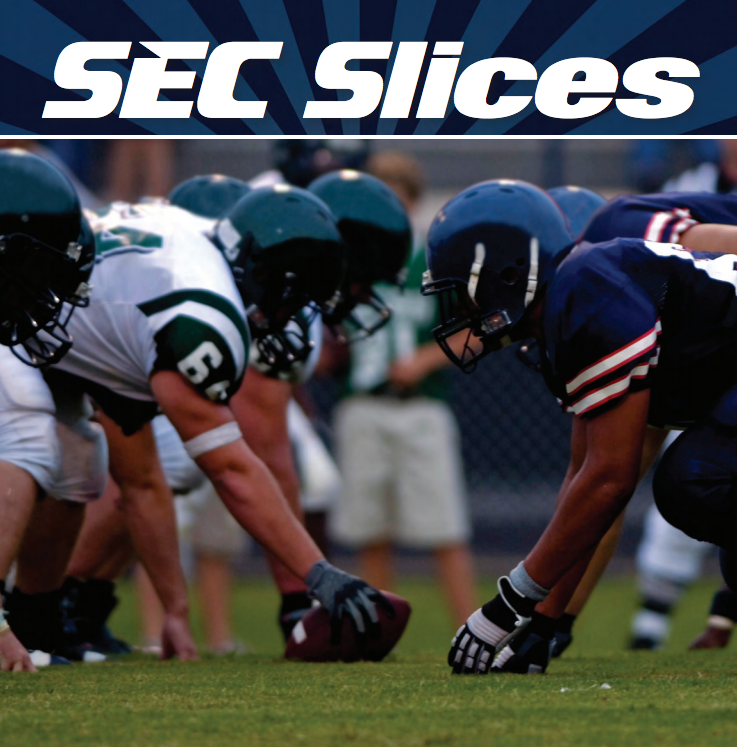 No one knows exactly when or where it happened, but one Saturday afternoon many years ago, a group of college football fans got hungry while watching their favorite team play. Then they ordered pizza, and a college football tradition was born. We recently drove PMQ’s PizzaTV van through Georgia, Tennessee and Kentucky to find out where Southeastern Conference football fans like to go for pizza. And while the towns and styles of pizza were different, two things were constant: fans love their teams, and they love their pizza! College and pizza go hand in hand. Tour four SEC cities to find out what attracts these students to their favorite pizzerias. 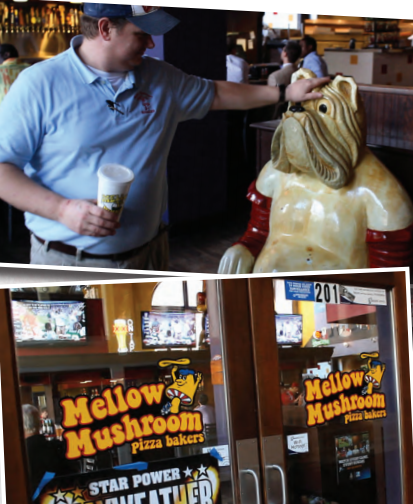 If college football is a religion, then there’s an obvious reason why Bulldog fans come to Mellow Mushroom. In fact, you see it as soon as you open the front door: the bulldog Buddha. Standing about 5’ high, the rounded belly of the statue resembles a Buddha—until you notice those droopy cheeks and the University of Georgia logo hanging from a chain. Georgia alumnus Marc Weinstein, who co-founded Mellow Mushroom in the 1970s and is now chairman of the board, gave the statue to Vincent Landis, who bought the Athens franchise in 2007. “Right there when you walk in, you see that Buddha!” says manager James Hart. “People rub it, touch it, pet it, want to take pictures with it. It’s a good luck charm—not just for fans, but for everybody.” Mellow Mushroom gets a steady stream of traffic during the week, but the most action arrives on weekends, Hart says. “College kids tend to stick to their studies during the week, but on weekends it’s time to let loose and forget about school for two days.” That’s particularly true on home game weekends; the restaurant opens an hour early and closes as much as two hours later than usual to accommodate the demand. The most popular pies tend to be the Mighty Meaty and the House Special. “There are so many people, and they’re having such a great time,” Landis says. “It’s a football atmosphere, almost like being at the game. We have a lot of TVs, so there’s nowhere in this place where you can’t see the game if you want to.” 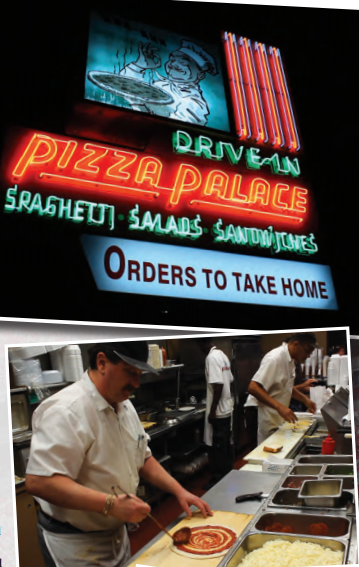 For many Vols fans, going to football games is a tradition that goes back generations. And with Pizza Palace recently celebrating 50 years in business, picking up a pie for the game is as much a tradition as the game itself. During the 1950s, brothers Al, Gus and Arthur Peroulas emigrated to Knoxville
from Greece, bringing with them family recipes—including some for pizza—and in 1961, they acquired a former drive-in restaurant. The restaurant is now run by Arthur’s son, Charlie Peroulas, who grew up in the restaurant. “We were one of the first pizzerias in Knoxville, and to this day, a lot of people tell me that the first pizza they ever had was from Pizza Palace,” says Charlie. With that kind of history, Charlie Peroulas admits he doesn’t spend much on marketing, and allows word of mouth to work for the business. “We have a very loyal local clientele,” he said. “We don’t directly market to UT students, but we work hard to be consistent and put out a great product, and word spreads.” In 2007, word spread all the way to the Food Network’s viewers when Pizza Palace was featured on the second episode of Diners, Drive-ins and Dives with Guy Fieri. “That’s been great for business. People still come in saying they saw us on TV,” says Charlie. The Super, which features all of the pizzeria’s ingredients, is the Palace’s most popular pie. “We don’t do all of the fancy ingredients; our menu hasn’t changed in 50 years,” says Charlie. “I’ve got a menu from when we opened in 1961, and it looks exactly the same.” And while Pizza Palace does fairly consistent business, when the Vols win, Pizza Palace also wins. “Knoxville loves football, and losing is definitely bad for business,” he chuckles. “People get so fired up over a loss that they just stay home, and they don’t order pizza. On the other hand, winning seasons are great for us. Pizza has become such a part of American comfort food that football and pizza go hand in hand.” 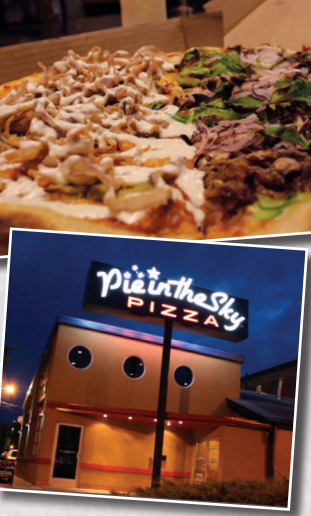 New York-style pizza is known for its big, foldable slices. Chicago is famous for deep-dish pies. And if employees at Pie in the Sky refer to a “Nashvillestyle” pizza, they might be referring to when they first started rolling pizza dough in cornmeal. “It gives it that unique texture,” says manager Beckah Pauli. “It’s Nashville, it’s the South, and we love cornbread. And just like there was one pizza place in Chicago that basically invented deep-dish pizza, we want to do the same thing with Nashville-style pizza. That’s what our owners are going for.” Pie in the Sky straddles the fence between traditional and gourmet pizzas. One of the most popular pies is the Happy Family, featuring pepperoni, Italian sausage, mushrooms, red onion and green peppers. But the pizzeria also boasts a bestselling gourmet-style pie, the Baja Chicken: chicken breast, corn, avocado and sharp cheddar, topped off after baking with a chipotle ranch dressing and fried onion strips. But regardless of the toppings combo, all of the pizzas are made from scratch. “We are totally into fresh,” Pauli says. “We make our own dough here, and our own sauce. We cut our tomatoes here. We shred our own cheese. Everything is done here.” The pizzeria’s signature pie is the Pie in the Sky, a 12-topping “majestic mountain of pizza” that features two layers of sauce and three layers of cheese. “It’s a massive pizza; it’s got almost everything we offer on it,” laughs Lacey Montgomery, a store manager. “We want to try to get the Man v. Food guy to take a crack at a medium.” Of Pie in the Sky’s three locations in Nashville, the Midtown store, minutes away from the Vanderbilt campus, is the place to be on game day. “Of all of our stores, this one definitely has more of a bar atmosphere,” says Montgomery. “You’ve got the jerseys and the yelling. You have to cater to your demographic. When you have tons of students, tons of nightlife, you have to cater to the school. It works pretty well for us.” 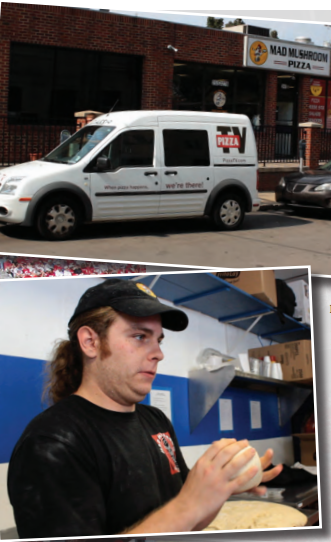 If there were a checklist called “How to Run a Successful Pizzeria in a College Town,” Mad Mushroom could check off pretty much everything. Location? Mad Mushroom is literally across the street from the University of Kentucky (UK). Late hours? Weekdays, the store closes at 2 a.m.; on weekends, it’s open until 3 a.m. Catchy phone number for pickup and delivery? 25-2FAST. “On weekends, we do about 80% of our business between midnight and 3 a.m.,” says Chris Haynes, an employee at the UK store. “We’re focused on a quality, inexpensive, fast product. You order it, and we’ll get it to you.”
Kinsey Henderson, who co-owns another Mad Mushroom in Lexington, says that holding great promotions is key to success in a college town. The restaurant offers daily specials at wallet-friendly prices, featuring a 14” cheese pizza for $4.99 for Monday Madness, and a 20” one-topping pie on Super Thursday. The pizzeria also gives away free cheese sticks each semester. Judging from the 1,300 served in the fall 2011 semester, this tactic works pretty well. “It gets them in the door, gets them to taste our product, and gets them excited to come back and try Mad Mushroom,” Henderson says. “I was a college kid, and free was the way to go. If you ever got anything free, you were happy and you noticed.” But around here, while football is a welcome diversion, the Kentucky Wildcats are better known for hoops, and basketball is the dominant sport in town. “Basketball season is a bit busier than football season, but they’re both good for us,” Haynes says. “They love the football, but this is a basketball town—always has been, always will be.”