The ad read, “Gringo Mike’s Best Pizza in Costa Rica.” I definitely had to check this place out.

Costa Rica is a very unique country. Tourism is rising 30 to 40 percent a year. It is a small country, approximately three million people, with almost half living in just one city (San Jose.) Costa Rica is Central America’s wealthiest country with it’s biggest export being Intel. I know you probably thought it was bananas or coffee—well not anymore. Costa Rica is now known as Silicon Valley.

Upon arriving in Liberia, the country’s second largest city, I saw some of the familiar big chain pizzerias. It was weird seeing these giants in such a tropical third-world country, but I wasn’t there to eat what I could get back home—I was there to see and eat the independent pizzas of Costa Rica.

My search for Gringo Mike’s started in a small pizzeria up in the northern part of Costa Rica at a beach resort called Playa Del Coco. Playa means beach in Spanish. There were three pizzerias in this small town. The owners laughed at me when I told them I was from a pizza magazine, but when I pulled out my business card and camera, they all took me a lot more seriously. From there, I made my way inland to Alejuela, just outside San Jose. I tried various pizzas recommended by the locals but was never really satisfied. Next stop was Tilleron, a nice little city on the way to a live volcano. I stopped at a recommended spot called La Caretta, meaning “the buggy.” They did have a nice homemade pie. 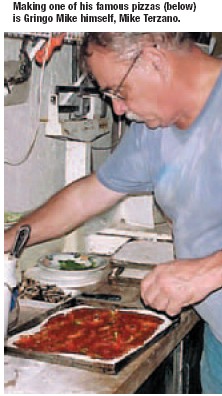 From there, I caught a puddle jumper down to the South.  I landed in Pal Mar Sur and yes, it had three or four pizzerias. I inquired about Gringo Mike and was told he didn’t exist anymore—he had closed up his shop. This was very disappointing and a blow to my story. I took a cab to the small town of Ojochal, where Gringo Mike’s used to be and found a unique, one-of-a-kind pizzeria, named Jardin Tortuga (Turtle Garden) with a hand-built wood oven to resemble a turtle.  The restaurant is totally outdoors with a covered area, a grass thatch roof and a large deck overlooking lush gardens. This place is literally in the middle of the jungle! I thought to myself, “How does this guy survive and make money?” The next three nights the place was packed—I couldn’t believe it! Just shows the power of pizza. This was a really nice find but still not enough to fill Gringo Mike’s famous shoes.

Then I had a stroke of luck. I was checking my e-mail at the local Internet café where I ran into a lovely lady named Bobby from Montana. She told me that she owns a pizza place called Dos Gringo’s, which was formerly Gringo Mike’s. I couldn’t believe my ears. I was misled! At least if Mike wasn’t around I could see his old place. She took me on a complete tour of her new place. She showed me all the old pictures of what she started with.

Bobby could tell me where to find Gringo Mike—he was under my very nose all along, but no one would tell me because they wanted all the publicity!

Finally, I met the infamous Gringo Mike, real name Mike Terzano, and his lovely wife Karen Terzano, Ph.D. When Gringo Mike started his pizzeria, he had to smuggle pepperoni from Panama because it just wasn’t available. Italian sausage also was not available anywhere, so Mike had to raise his own pigs. In Costa Rica, there was a town understanding, a no infringement rule where no one was allowed to duplicate what someone else was doing. However, everyone started to do pizza because of Mike’s success, but no one could compete with him.

Originally from Detroit, Mike and Karen had been going back and forth between Detroit and Costa Rica since 1990. They opened their first pizzeria in 1995. In 1998, they settled permanently in Costa Rica. 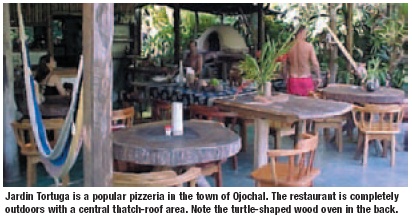 After selling Gringo Mike’s, Mike and Karen bought the hotel Posada Playa Tortuga, the second oldest hotel in the Southern zone where he’s building a new kitchen onto the hotel. He is calling it Armando’s Italian Kitchen, and yes, he will be serving pizza again. I finally had the chance to try Mike’s pizzas and they were superb. I can’t wait to return and see Mike’s progress, enjoy the perpetual summer weather that Costa Rica offers and as Mike says, to live the dream! Just goes to show that if you really put your mind to it, you can overcome any obstacle and be a success anywhere…even in the jungle.