How Domino's Does it - PMQ Pizza Magazine

Would you have the courage to open the first Domino's Pizza stores in the home town of Pizza Hut?
That's just what Mike Cunningham did in 1986. He opened four of them all at once in Wichita Kansas during Pizza Huts height of popularity.

If you met Mike Cunningham in person you would never classify him as a big risk taker. He's not flamboyant, eccentric, or someone who thinks he knows it all. In fact, he is the opposite. He is very typical of the kind of franchisees that were and still are the building blocks of the Domino's Pizza system.

It wasn't his courage as much as his faith in the Domino's Pizza system that allowed him to take what would appear to be an extremely risky gamble. As Mike says "a lot of very bright people have come and gone or come and stayed within Domino's that have left the system stronger as a result."

Now after 20 years as a franchise, he owns one store for every year of service. Twenty Domino's Pizza stores in the Houston Texas area, including College Station, home of Texas A&M. Mike gives the credit for his success to others; his wife, his mentor Richard Mueller, The Domino's Pizza System and his management.

"There is no way I could have done this without Cindy (his wife of 21 years)". She was there from the beginning working beside me and giving it her all. Only after five years of helping to get our company firmly on track did she retreat to the home front, and she has been a much valued fountain of support ever since."

"Every one getting started in business needs a mentor and mine was Richard Mueller." (Domino's Legend and Largest Franchisee). Richard Mueller was Mike's first Domino's employer back in 1973 and had first suggested franchising to him. Over the years Mueller has provided invaluable ideas and assistance to me and many other franchisees."

"My strong point has always been managing people and managing the rush. The Domino's system provided me the support in the areas I wasn't really very good at so that I was free to do what I did best." The corporation and network of franchisees gave me the support I needed in the other areas. I'm not a lawyer, an accountant, or a marketing guru. I felt like that's what I was paying Domino's my royalties for. (He smiles) "I got my money's worth.

He gives his fourth heap of credit to his management people. And he means it too. His key management people have long years of experience and loyalty. Supervisor Donna Holt has been with him for 18 years, Tom Moyes for 16, Dean Mulkey 14 and Stephen Williams would have been there longer than 8 years if it weren't for the fact that he's only 28 years old.

He has given them responsibility and the freedom to control their own stores and it has worked out for the best.

Like so many other Domino's franchisees, Mike was in College working for Domino's part time and got sucked into the opportunity whirlpool, never to finish what he started.

Mike was attending the Pharmacy school at Ohio State University in 1973 when he took a job as ad driver. That changed everything. After managing two stores and finding that he had a knack for management, he supervised other stores, and eventually opened his first store at Texas A&M in College Station in May of 1978. Married only a year to his wife Cindy, it was very stressful. "It wasn't a great time to open a campus store. In fact it was scary. After we had put everything we had into the store and had borrowed every dollar we could borrow, I thought I had made a mistake. But when the students came back in September I was fortunately still in business and they took a liking to Domino's. That was a big relief."

Over the years Mike has owned as many as 26 stores. He has sold some and bought others and is very happy to have his relatively small piece of the Domino's Pie.

Sales are up! What's been working? 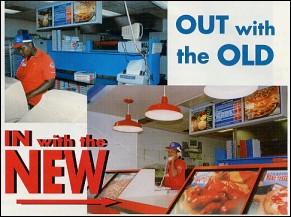 Mike believes that two new Domino's initiatives are having a positive impact on sales: Domino's new re-imaging program and the heated hot bag. "We are getting a good bump in sales with each store that we are re-imaging. And the heated hot bag has been a success. Initially I think the national marketing of our heated hot bags was responsible for a sales surge but I think this trend will continue. In the long run, sales will continue to improve because the heating system makes our pizza's taste better to the customer simply because they are hotter, and nobody gets that occasional cold pizza anymore. One thing about the Domino's hot bag system is that the customer can see the electric chord hanging from the bag. That really gets their attention."

Even with all of the national support from the head office, the pizza war is ultimately fought on individual neighborhood battlefields. Mike knows this and does nt rely solely on Domino's national marketing. He still has an aggressive local store marketing strategy.