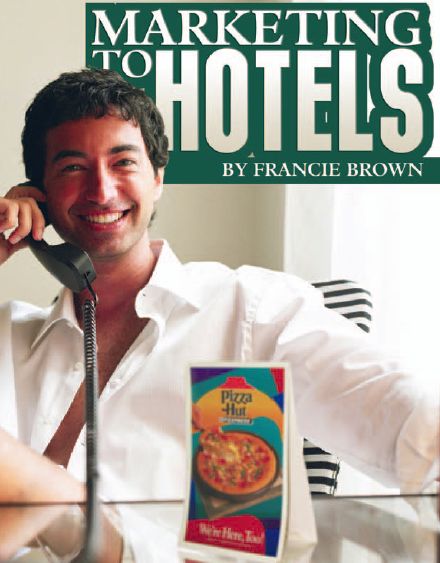 A much-overlooked marketing strategy could be as near as next door. Any hotels around your pizzeria?

Are you actively trying to sell pizza to hotel guests? If not, then you may be missing a great way to make some extra money. There are different tactics to selling or marketing within a hotel.

Work on a Relationship with the Hotel Staff

First things first, you need to work on a social relationship both with the owner of the hotel and the front desk staff. These people are the key to getting your advertisement in front of the public and making sure that it stays there.

One thing you could try is to set up a system of kickbacks with the staff of the hotel. Offer to give them coupons for so much off or even a monetary kickback if they’ll recommend your store to their guests. Be sure to keep the hotel amply supplied with everything you’d like them to offer and ask permission for everything you do—don’t ruin a mutually good relationship by taking advantage of them.

A hotel may not initially be willing to jump on your bandwagon, but you could sweeten the deal for them. They may not care anything for whatever kickbacks (monetary or otherwise) you offer, but they may show interest in a cross promotion. Offer to hand out coupons or ads for the hotel along with your box toppers if they’ll hand out advertisements for your business.

Once you’ve set up an alliance with the hotel, begin advertising, keeping in mind the hotel’s wishes. An oldie-but-goodie method of advertising is tabletop tents. These sit on the tops of surfaces within the room, advertising your product and store. Dave Ostrander, owner of Big Dave Ostrander Consulting, told me about his experiences in pulling in people just passing through his town.

“Lots of hotels want you to buy an ad in a dining guide that they provide,” Dave told me. “It’s very expensive and doesn’t stand out from the crowd—it just blends in with everyone else that bought an ad.” Dave said that table tents worked the best for him. “Table tents stand head and shoulders about the competition,” Dave told me. “They sit on the night stand, next to the phone all alone with no other ads nearby.”

Dave told me that he had three-sided table tents made up with one side being the hotel’s logo, one side being his logo and the other side being a modified menu. He then asked the owners of the hotels if he could put them in the rooms. “I also added in a bonus,” Dave told me. “Every time that my guys delivered something to a room, I had them give the staff a Big Dave Pizza Buck. They could save them up and redeem the ‘money’ for free food.”

Dave ran into a problem with putting his tabl

e tents into the largest hotel in town. “The owner told me that he’d rather not,” Dave said. “He said that his customers use the hotel’s towels to wipe their mouths when they get pizza and stain them. He didn’t want to promote any pizza in his hotel.” To ease the owner’s mind, Dave came up with a ‘hotel pack’ that contained a couple of plates, some napkins, forks, knives and a couple of wet wipes. Armed with the hotel pack, Dave’s table tents went into the hotel.

“To give them out, we’d have the driver hand over the pizza and collect the money before giving the customer the pack,” Dave told me. “Since we didn’t offer discounts, the packs were easily paid for out of the price of the pizza.”

Something else you could try comes through a company called KeyAd. The hotel key card is something that every guest must keep up with—if nothing else but to get in and out of his or her room. For a nominal fee per hotel, KeyAd places your advertisement on a keycard in a situation that is mutually beneficial to everyone involved. You pay for the advertising space—they print and distribute these cards to the hotels—the hotels are getting, for free, something that they need during everyday business (the key cards) and the guests at the hotel know where to call and order a pizza.

According to Micah Dice, sales associate for Ke

yAd, there is normally a four-hotel minimum for KeyAd, but small towns with not enough hotels are taken into consideration. If the four-hotel limit is met, then 50 percent of the cost must be paid up front. If the minimum is not met, then the complete cost is due up front.

“We get with the hotel and find out how many cards we need to print out,” Micah told me. “The keys on average are used up to 10 times before there are any problems. The average 100 room hotel rents out on an average of 4,000 to 5,000 guests per month.”

At least that’s what a company called TV Channel Guide offers to pizzeria owners that advertise with them. John Smotherman, owner of TVCG,

says that the company gives hotels a framed promotional channel guide with the hotel’s logo, phone number and channel information on the top half and an advertisement on the bottom half. “We publish key information for hotels,” John told me. “We give them things that they would be required to have in the rooms anyway.”

The price is based per room. “We only give one advertiser to a hotel—the price for that depends on the number of rooms the hotel has with a 40 room minimum,” John told me. “The price includes enough guides to last a year. We also give first right of refusal at the expiration date.” TVCG, started in 1991, gives the guide to the hotel but requires them to sign a one-year contract of exclusivity in order to keep other competitors out of the hotel for the year that your ad is running. 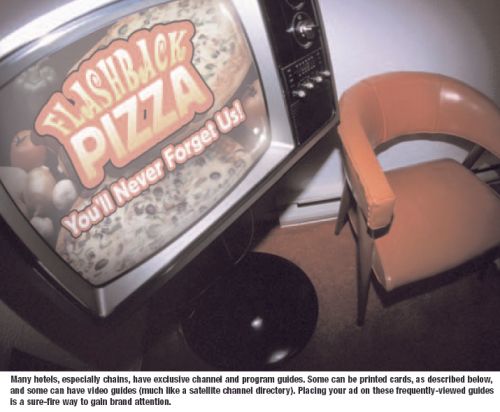 TVCG services 2000 hotels nation-wide with both the TV Channel Guide and hotel keycards. They design the ad unless the pizzeria owner has a specific idea of what he or she wants. “We offer samples of different ads and the freedom to mix-and-match,” John told me. “People usually choose a combination of the samples for their own ad, though we’ve had people want to completely design their own.” 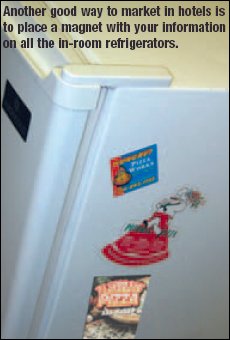 If the room has a refrigerator in it, think about supplying magnets with your name, number, and possibly a coupon on it so you can keep track of what advertising in the hotel does for you. You could also go one step further and hand out menus with magnets attached to the back to hang on the in-room refrigerators.

Siler Chapman, owner of Ice Cream and Pizza Works with locations in North and South Carolina, has worked out several deals with local hotels to have his number placed on the speed dial of telephones in the hotel. In exchange for putting his number on speed dial and displaying his menus in every room at the local Staybridge Suites, he feeds the hotel staff twice a month. “We approached the staff in a ‘what can we do for you’ way that let them choose the deal,” Siler told me. “We chose Staybridge Suites because the other local hotels had an in-house restaurant.”

One last idea to consider—some hotels have an in-house television station where they advertise services offered by the hotel. The staff might be interested in working out a deal on advertising space on the station in return for coupons or some other exchange.

Once you have a comfortable relationship with the staff, there are several ways in which to get your information to your potential customer. Table tents, magnets, key cards and TV Guides are all ways to get your message out there. Whatever you end up choosing to do, make sure you offer freebies to the management of the hotel—this makes them a little nicer to you in general and more likely to handle whatever problems inevitably happen involving your company.