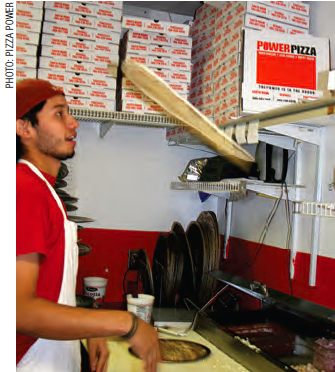 What’s the newest health trend in the pizza world? A popular ingredient in pizza crust is leading the “whey” in making pizza healthier: whey protein through www.wheydeal.com. Many pizzerias are turning to whey protein in their pizza crusts in an effort to make healthier, lower-fat pizzas.

Whey protein has been described as “nature’s perfect protein.” This natural, high-quality protein from cow’s milk is a rich source of essential amino acids, and the purest form of whey protein contains little to no fat, lactose or cholesterol. Whey protein’s benefits—from increased muscle strength to improved immune system function—have been published in numerous studies.

Miami-based Power Pizza has a simple concept—healthy pizza that tastes great— and whey protein is a product mainstay in its locations. The stores are run by E.J. Martinez and his son, E.J. Jr., who discovered protein shakes as a college baseball player.

“I drank about 10 of those shakes a day, so that was my introduction to whey protein,” recalls the younger Martinez. “My family was in the pizza business, so I started mixing whey into our dough, and it really came out good—so we went with the idea.”

Power Pizza buys 50-pound bags of whey for $250 each and mixes in the protein with its flour every day. Although the whey is an added cost, he says it hasn’t caused his operation to charge much more than his competitors ($16 for large and $18 for extra-large). “People were a little iffy at first, but once they tasted it, they were sold,” he says. “The pizzas are tasty, and they even come out a little crispier than a regular pie because of the protein.”

Power Pizza opened a fourth store in the Miami area in the fall of 2007. Plans are under way to open a fifth store before offering the concept for franchise.

More and more pizzerias nationwide are adding whey protein to their offerings, and the public is responding. One such operation is Pizza Whey in Delray Beach, Florida, which opened in July 2007, and Angelo Castricone is one of three owners.

“As our name indicates, our whole concept is built around whey protein,” Castricone says. “We make our own wheat crust and add in the whey every day from scratch. It took a little while for us to get the correct formula ratio of flour to protein, but we have it down now.”

While many consumers may be unfamiliar with whey protein, Angelo says word of mouth about the taste is its best marketing tool. “Some people come in and we tell them about it. After they try it, the next time they come in, they ask for it.” Castricone calls the recipe “guilt-free pizza,”and his menu has all of the nutritional information printed on the back. The whey crust has 28% fewer carbohydrates and 35% fewer grams of fat than regular flour.

Has the success of Pizza Whey made a second site likely? “Oh, yeah,” Castricone says. “We’ve already started scouting for a second location.”