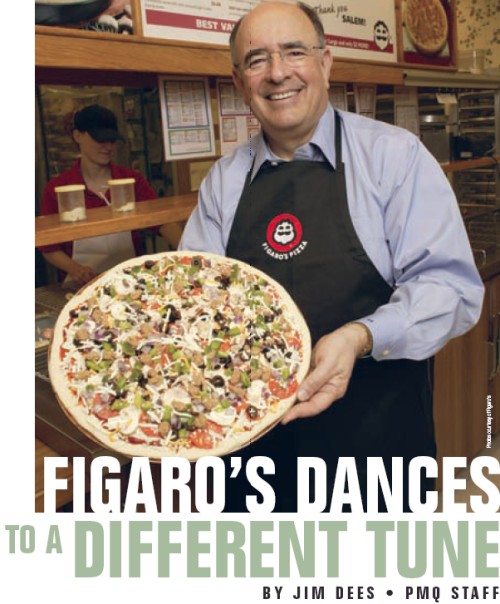 Figaro's of Salem, Oregon, started with the "take-and-bake" concept some 24 years ago, but Marketing Director Jerry Doty, reports, "that's part of what we are, but that's really not who we are now."

"When take-and-bake was first introduced it was a novel concept," Doty says. "Since we added ovens (10 years ago) the customer can now have it either way. Now we can compete with any type of pizza place. Our motto is still 'this is the best pizza you can have at home.'"

With total sales of $25,000,000 last year, the company feels its concept is as fresh as its pizza. Doty reports that Figaro's business, particularly in its larger markets, is now a "50-50 split" of customers eating in and taking home. Among its many promotional plans, the company is launching a major push into the bustling Chicago market.

"We use a master franchisee. Some concepts call this an area developer business model in which a company or individual purchases from us the rights to develop a particular market. Steve Kleczewski is our master franchisee for Cook and several surrounding counties in Illinois. He will open several stores himself as well as attract and then assist individual franchisees in the metro Chicago market. He has plans to open 50 stores in the Chicago area in the next six years."

The company has reasonably high expectations for the Midwest and beyond. A recent poll of Figaro's customers found that 69 percent had not eaten a pizza anywhere else in the past 30 days. Doty said his company believes its concept doesn't take much heat from traditional frozen pizza sold in grocery stores.

"With frozen pizza, there's simply no comparison," he says. "Frozen pizza is full of preservatives and very lightly topped. Ours are made fresh with no MSG and with abundant toppings."  Figaro's offers 12 to 14 toppings, enabling a customer to eat 4,000 different pizzas, or as Doty says, "a different pizza every day for 11 years."  The company is further breaking with tradition by offering take-and-bake for delivery, becoming the first chain to do so. 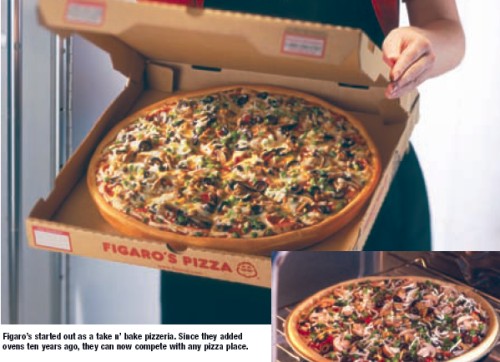 "We've only implemented take-and-bake by delivery for about a year and a half," Doty said. "It hasn't really taken off yet. Only about 5 percent of our deliveries are take-and-bake. It will take some time to grow into a hot delivery item."

"We feel that's fair since the consumer is doing some of the work," he said.

Figaro's has positioned itself to try such non-traditional tactics after the company underwent a complete makeover in 2001, when a partnership group, headed by former video rental magnate Ron Berger, purchased the chain. The new owners added new menu items, changed the slogan and instituted a new store design. In keeping with the company's operatic theme, the new slogan is "flavors that sing." The Italian historical legacy is illustrated in the new Tuscan color palettes, which are accented in all the new stores (40 opened last year). The opera connection is further highlighted in the store's radio ads, which feature music from Mozart's "The Barber of Seville." The stores also use humorous posters, one of which features "The Three Cheeses."

"I hope Pavarotti doesn't mind," Doty said with a chuckle.

Putting the "fun" in fundraising

Figaro's uses many of the standard pizza industry marketing tools including glossy newspaper inserts, direct mail pieces of coupon books and postcards. However, in keeping with the company's penchant for innovation, Figaro's has also instituted a different approach. The company produces its own "newspaper" to get the word out about its menu and any specials it's offering. "This is a unique piece we do called 'Pizza People' which is a newspaper about the store," Doty said. "The idea of it is you take pictures of your customers and staff and it comes out as a tabloid-sized broadsheet that folds down just like a newspaper. That gets mailed out and people look at that and say, 'Wow, that's Jimmy, my neighbor, I didn't know he goes to Figaro's.' It just feels differently from a glossy newspaper insert that everybody does. We also feel like it gives us a grass roots-type feel, like we're part of the community." 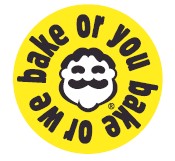 Doty say the company also explores ways to cross-promote with other businesses near their stores. "We work with our franchisees on how to approach other businesses for cross-promotions. For example, we might have somebody go into a local hair salon and say, 'Look, we'd like to buy you lunch tomorrow. How many people are going to be here?' Then we'll leave some certificates behind for them to give out to their customers. The idea is to get our food into as many people's mouths as possible."

Doty said the company has also had success with a promotion called "Fun Night," which most stores offer four to six times a year with a portion of the proceeds going to a local charity.

"Fun Night is where we select a charity, say, the Boy Scouts, and we donate a percentage of an evening's sales to them," Doty explained. "The boys promote it, they go and pass out fliers. They go out and sell the thing and then they turn a slow night like a Tuesday into a much more busy week. We're happy to give away some of that money to them because we make more, they make more and everybody's happy. It also gives us a chance to reach a consumer we might not ordinarily reach."

In addition to local charity work, the whole chain comes together once a year to raise money for a national cause. Two years ago, Figaro's made a contribution of $10,000 to America's Second Harvest which is dedicated to ending childhood hunger in America. Last year Figaro's contributed 10 cents from every pizza sold to the International Franchise Association's Education Foundation Scholarship Fund which goes to further the education of an armed forces veteran.

Figaro's is looking to the future with plans to open 30 to 60 new stores per year by using a formula that will ensure "quality growth." Figaro's targets high-traffic neighborhoods, shopping centers, freestanding pad sites and other non-traditional locations where its stores occupy between 1,000 and 2,000 feet.

"We use a mathematical modeling tool that evaluates each potential site based on 14 criteria," Doty said. "This would include loan costs, labor costs, the number of competitors, what the strip center is like, what the other tenants are like, these type things."  A field service rep from the home office works with the franchisee during opening week and a mystery shopping service is employed to come in and patronize the new store to report on any deficiencies.

"Our stores are shopped every other month by the Jancent Company out of California," Doty said. "The beauty of it is we get an email from them the next day, which of course we pass along to the franchisee immediately. It rates them on the complete customer experience: how clean is this store, what is the service level like, what is the product like, the pricing, what do you think about the concept. If we're rolling out a new promotion, for example, we can have the shopper buy that particular item. Basically, we try to give our franchisees every tool possible to help them run a successful operation," Doty said.

All that attention to detail, coupled with the company's innovation, keeps Figaro's singing a happy song.