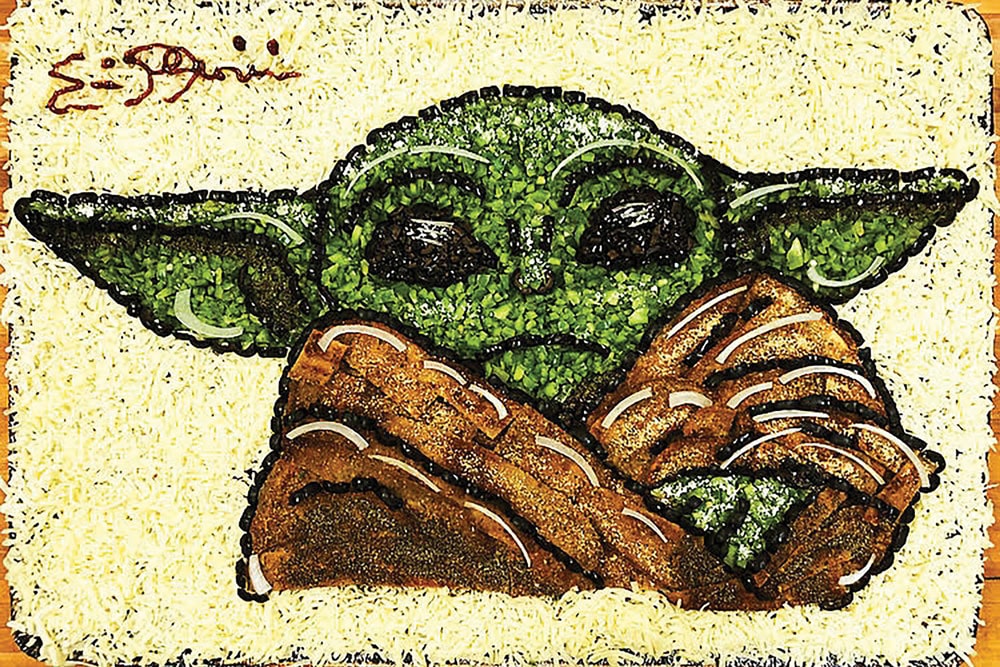 When you’re born into a prolific Italian-American restaurant family spanning five generations, the bar is high for making your own mark in the culinary world. But Eric Palmieri of D. Palmieri’s Bakery, located in Johnston, Rhode Island, has met that challenge with style as a prolific and gifted pizza artist—and with a little help, perhaps, from the Force.

Palmieri’s pizza art designs have earned widespread coverage in recent months from national media outlets like CNN and Fox News. Exquisitely attuned to the pop-culture zeitgeist, he has created designs that range from simple creations like sunflowers and roosters to Heath Ledger’s Joker, Pennywise from the It films, and Jon Snow of Game of Thrones fame, not to mention iconic Star Wars characters like Darth Vader, Chewbacca and BB-8. 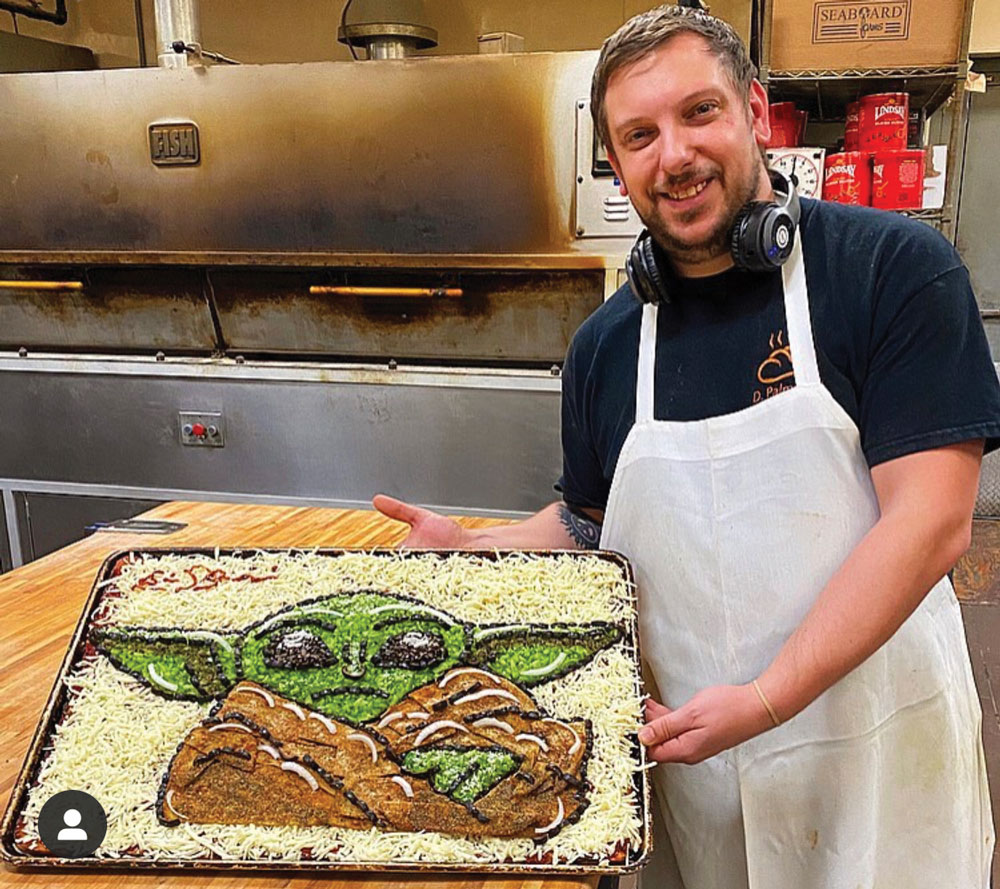 His crowning achievement so far might be his Baby Yoda pizza, which depicts the beloved character from The Mandalorian, complete with huge ears and a stony, inscrutable expression. It’s a work of pizza art that seems tailor-made for the Instagram era, but it’s just one of many masterpieces in Palmieri’s ever-growing portfolio. “As far as the most creative pizza I’ve made goes,” he says, “it’s probably a toss-up among either the Lady and the Tramp pizza, the Winifred Sanderson (the witch played by Bette Midler in Hocus Pocus) pizza, or the Predator pizza from Alien v. Predator.”

Palmieri says he had to figure out new techniques for using ingredients to achieve the looks he wanted. “At this point, I’m usually able to plot out exactly what kind of ingredients I’m going to use and how I’m going to manipulate them beforehand,” he says. “However, in the beginning, there was a lot of trial and error in developing my techniques.” 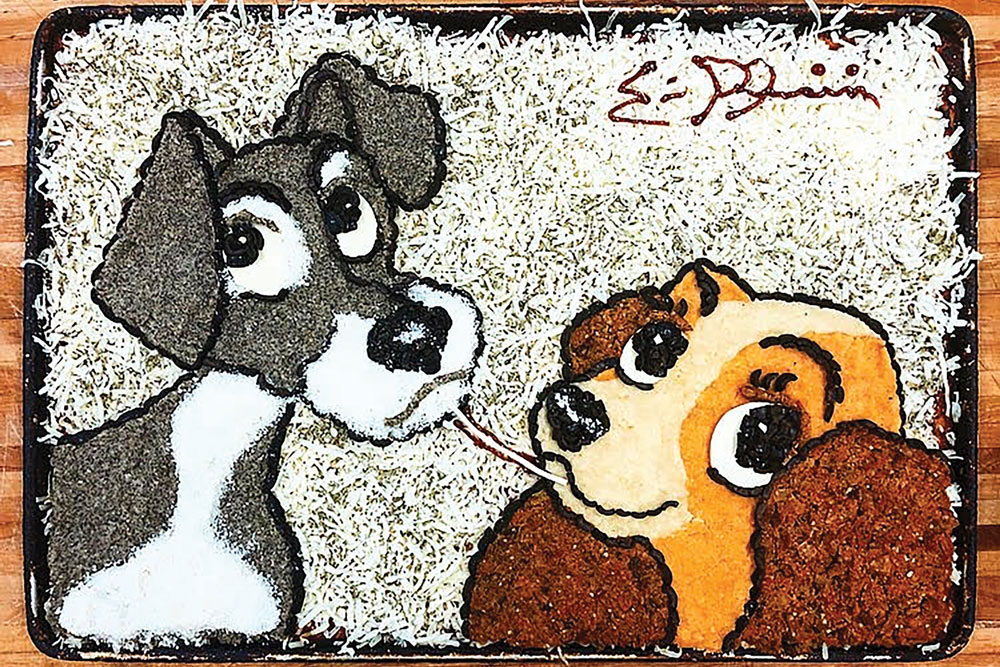 As a fifth-generation baker, Palmieri’s basic pizza know-how came from growing up in the business, but the passion came after college graduation. “I studied music composition at Colorado College and had no plans to make a career out of baking,” he says. But after a devastating fire destroyed the bakery, owned by his father Stephen Palmieri, in July 2007, he joined the family business once the facility was rebuilt. “I found myself with a newfound love and appreciation for the bakery that I didn’t really have before,” he recalls. “I don’t think I ever fully realized how much our bakery meant to the customers when I was younger, some of whom had been coming for decades. In the days following the fire, the outpouring of support and grief from customers over the loss of the bakery was overwhelming and humbling.”

Palmieri has always loved art but never studied it, so he’s entirely self-taught. It has taken him nearly four years to develop and hone his skills, starting with an American flag pizza—with pepperoni stripes and olive stars—in 2016. He followed up with a pie sporting the New England Patriots logo in honor of their run for the Super Bowl title in 2017. These artistic pies proved so popular with customers that he started branching out, creating eye-popping designs inspired by cartoon characters like Scooby Doo, the Grinch, Snoopy and Charlie Brown. He posts photos of many of his creations on the D. Palmieri’s Bakery Instagram page as well as on a private Instagram account called Eric Palmieri Pizza Designs.

After bush fires destroyed wildlife habitats across Australia in late 2019 and early 2020, he even created newsworthy pizza artwork featuring beloved animals like koalas and kangaroos and asked his followers to donate to Aussie fire departments battling the blazes. 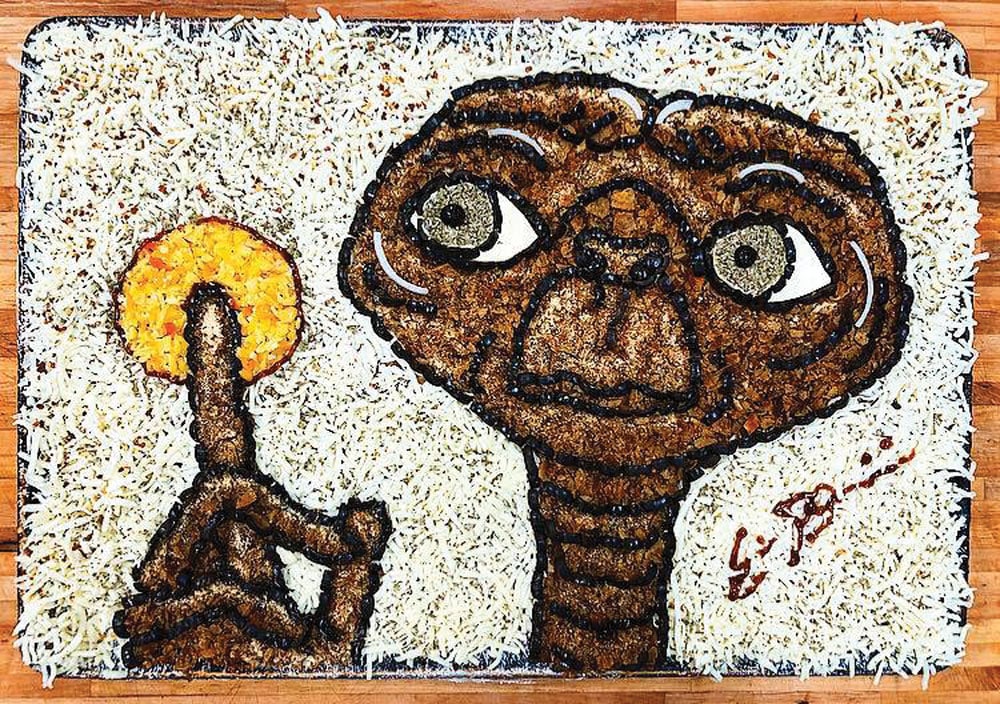 Art You Can Eat

Palmieri works with a variety of pizza ingredients, including standards like diced tomatoes and bell peppers, and every pie is completely edible. The most unusual toppings he has used so far, Palmieri says, were blue and purple potatoes. “Both colors are hard to find elsewhere,” he notes. “I used thinly sliced purple potatoes to great effect in my Joker pizza, and I used mashed blue potatoes to make a Barcelona soccer logo. Unfortunately, the blue potatoes are really hard to find lately, and not being able to use blue really limits what types of designs I can make.”

Palmieri also designs pizza portraits based on well-known hometown personalities, such as Providence TV news anchors Mario Hilario and Frank Coletta—a shrewd way to grab media attention in a pizza-saturated market. But creating edible portraits proved to be a challenge, he admits. “Human faces are incredibly difficult to do well using food,” he says. “Everyone’s face is extremely unique to them, and the slightest misstep can be the difference between good representation and bad representation.”

Commissions make up the bulk of Palmieri’s work. “Most often, people want me to make [pizza art] of their pets, school logos, or a favorite character or animal that I haven’t made yet. Just recently, I got requests for a giraffe and an alpaca,” he says. 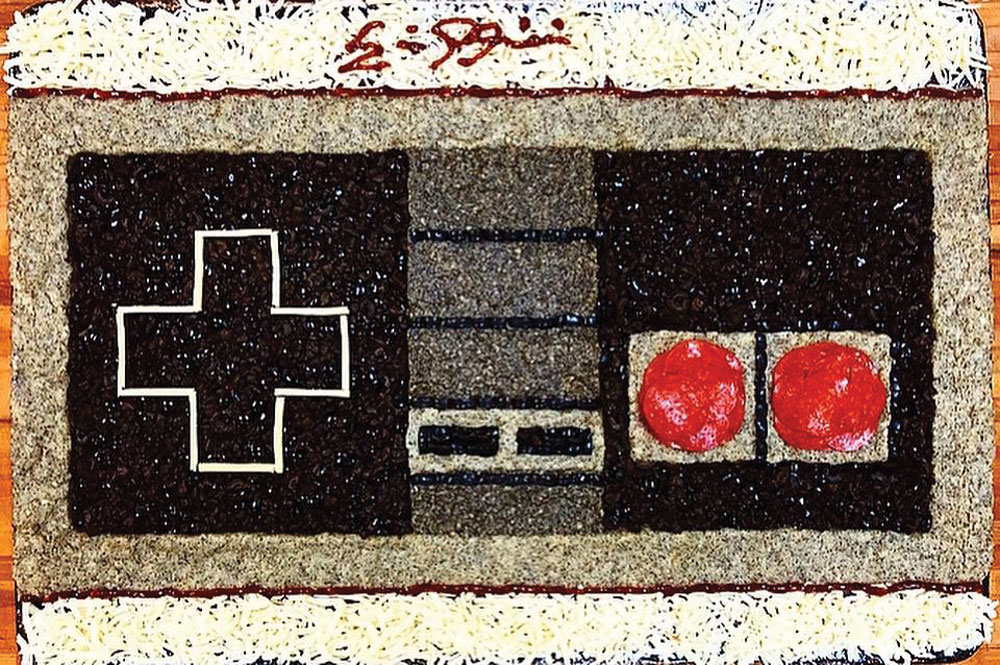 Palmieri’s price per commission depends on the level of detail the customer wants. He works closely with customers to accommodate their budgets and dietary preferences. A basic work of pizza art will cost $59.99, and a more detailed rendition will usually cost around $89.99.

Outside of commissions, Palmieri tries to make one or two new designs per week. “I love what I do, and I really try to not go too long without making something new,” he says. “I’m always working hard to develop new skills and techniques in order to improve the look and quality of my designs.

“Today, the most gratifying part of what I do is seeing the faces of parents when they come to pick up one of my pizza designs for their child’s birthday,” he adds. “I have two girls—three months old and two and a half years old—and I know how important those family functions are to parents and other relatives. It means a lot to me to know that I was able to make their special day a little bit extra special with my pizza art.” 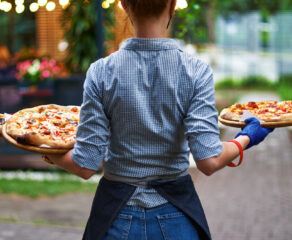 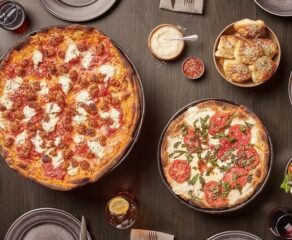