How to Create a Crispy Pizza Crust - PMQ Pizza Magazine 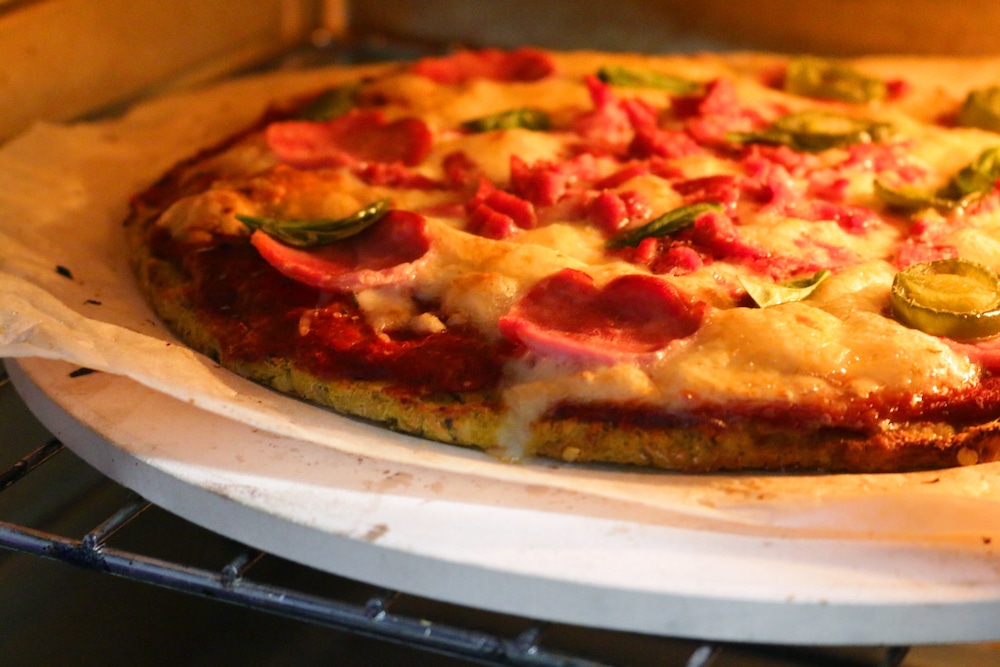 The secret to a more crispy pizza crust is probably not what you think. You might assume that less water will result in a crispier crust. But you’d be wrong. To achieve a more crispy crust, you’ll need to add more water to the dough formula. This allows the dough to be a little more fluid and expand more readily during those first few critical minutes in the oven.

The greater porosity (less dense) structure of the dough creates a far better thermal block to the heat coming up from the bottom of the pizza than a dense, heavy dough would. As a result, heat does not readily move through the dough and into the sauce, where it is dissipated as steam during the baking process; instead, it builds at the bottom of the dough piece, which gives a more thorough bake and creates a crispier texture in the finished crust.

There is one exception to this rule, though: Chicago-style thin-crust pizza. In this case, the dough absorption is in the 45% to 50% range, and the dough is shaped by passing it through a dough sheeter/roller. The resulting dough skin, which is very dense and heavy, is then dressed and immediately taken to the oven for baking, but here is the real difference: These pizzas are given a very long bake, with typical baking times running from 25 to 30 minutes at 500° to 525°F. With baking times this long, there is sufficient time to thoroughly bake the crust and develop an acceptably crispy texture.

Occasionally, we also find that in our endeavor to make a crispier crust, we end up making the crust thinner and thinner; this can and will contribute to a crispier crust characteristic but, when achieved in this manner, the crispy texture doesn’t remain very long after the pizza is removed from the oven. The crust is initially crispy but doesn’t stay crispy for more than a couple of minutes.

What about adding sugar or increasing the amount of sugar in the dough for a more crispy crust? This approach doesn’t work too well. It will cause the dough to brown faster during baking, resulting in what appears to be a faster bake time for the pizza—but instead of actually baking faster, the crust is just browning faster, so we end up taking the pizza out of the oven sooner. This can be a mistake because the dough may not have had sufficient time to thoroughly bake all the way through, resulting in the development of a gum line under the sauce. Or, at the very least, the crust may be brown and crispy only on the surface, with a very thin, crispy layer on the crust that is soon lost after the pizza is allowed to set for any period of time after baking. Also, the sugar becomes more concentrated in the outer portion of the crust than in any other part, due to the extremely low moisture content in the portion. Since sugar is hygroscopic (we’ve all seen lumps in the sugar bowl), it will exhibit a greater affinity for water/moisture than any other part of the crust; hence, moisture that is in other parts of the crust will migrate toward the drier portion, until the moisture content equilibrates throughout the crust—but, by that time, the once-crispy portion is now soft and soggy!

Back when conveyor ovens were just becoming popular, a lot of operators found they could bake their pizzas faster by increasing the baking temperature and decreasing the bake time. Well, the pizzas were brown on the bottom and top edges, but the bottom crust wasn’t sufficiently baked to maintain its crispy nature for more than a minute or so after baking. Eventually, we began slowing down the process and once again getting crispy crusts on our pizzas. But the genie was out of the bottle, and we all had a taste for the elusive 5-minute crispy pizza. We pretty much accepted the fact that we were going to have to bake our thin-crust pizzas for 6 to 7 minutes. Soon, though, new, more efficient air impingement ovens made their debut; baking temperatures immediately jumped from the 450° to 460°F range to the 490° to 505°F range, and baking times went down to the 4.5- to 5.5-minute range.

Best of all, these pizzas were indeed crispy, and they were able to maintain their crispy texture about as well as the slower-baked pizzas. The time of the first true 5-minute crispy-crust pizza had arrived. But we saw some problems for those operators with older-style air impingement ovens who were also cranking up the temperatures and lowering the baking times—the results they were getting were not always the same as those obtained with the new oven design technologies. So here’s some advice to those with anything except one of the new air impingement ovens: Try it to see if you can make a pizza that is acceptable for your operation. If you can, you’re home free; if you can’t, accept the fact, and go back to your slower, more thorough baking conditions. Remember, it’s better to have a slightly slower-baked, crispy crust that everyone loves than a faster pizza that lacks the desirable crispy texture and that nobody really likes.

While we’re talking about air impingement ovens, one thing should be mentioned:

When you’re baking at super-high air impingement temperatures, proper selection of a baking disk or screen is critical to prevent the development of a “pizza bone.” That is the extremely hard-edged crust that develops when the crust edge is exposed to high temperatures in combination with high airflow. The edge of the crust can become overbaked and superhard—hence, the “pizza bone” reference. Fortunately, perforated baking disks with a suitably wide edge and without any holes do an excellent job of protecting the edge of the crust from the high airflow, and create a finished crust that has a naturally crispy, yet chewy, texture.

The late Tom “The Dough Doctor” Lehmann was the director of bakery assistance for the American Institute of Baking (AIB) and a longtime industry consultant and contributor to PMQ Pizza Magazine. This article originally appeared in the August 2008 issue of PMQ.