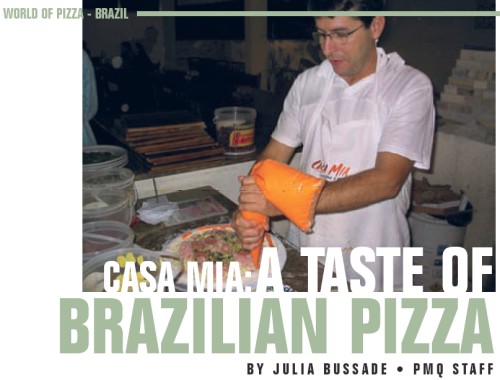 It is the summer of 2005. The University of Mississippi, where I have been teaching Spanish and Portuguese since 1996, is on recess. Right before the final exams, I had the urge to see my family, so I hopped on a plane to Rio de Janeiro, Brazil, where it's supposed to be the beginning of winter, but the temperature is still around 80°F. It's particularly warmer in my hometown of Itaperuna, four hours Northwest of Rio, where my parents live. 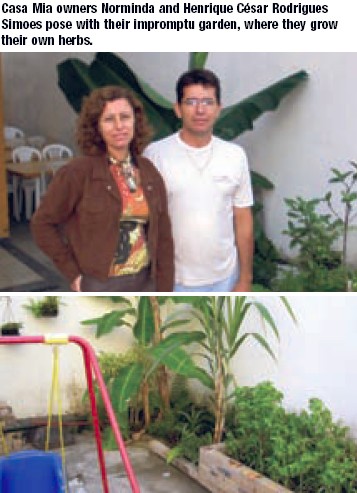 When I went out with my friends for the first time, they asked me, "So, what's new?" I began telling them about a new project where I was translating a pizza magazine into Portuguese. "A pizza magazine?" they all asked in sync. The conversation progressed and we continued to talk about pizza. With all the pizza talk, we started getting hungry, so we drove to a restaurant specializing in – (you guessed it!) pizza. 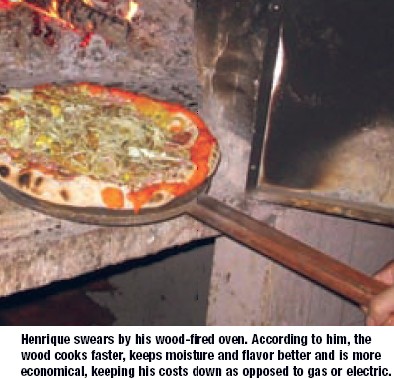 We sat down and I started looking around. I noticed that they used a wood-burning oven and had it right out in the front of the restaurant. We followed every single step as they made their freshly prepared pizzas. We could see the way they kneaded the dough, sliced the tomatoes, spread the cheddar around the edge and then carefully placed them in the oven. We could see everything the chef did to the pizza. It was quite fascinating and really added to the ambiance to seeing our food come together right there in front of us. This pizzeria is not a one-man show, but there was only one chef who assembled and cooked each pizza. He calls them his masterpieces and they are all unique. 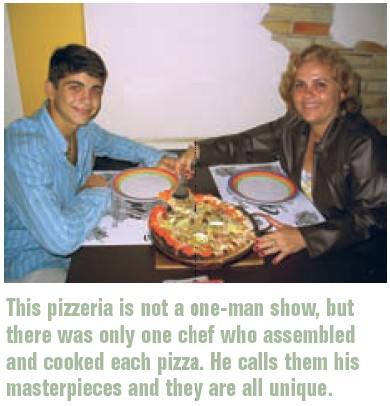 I decided to approach the already very approachable chef in the open kitchen, and found out that he was not only the chef, but the owner, the purchaser and the manager of 11 employees. I set up an interview with him for the next day.
His name is Henrique Cesar Rodrigues Simoes and he calls himself the "pizzaiolo" of Casa Mia (his restaurant). His wife, Norminda, who is a dentist, joined us right in time to explain that the restaurant got its name from the repeated question about its location. When they started talking about opening a restaurant, their friends would ask them, "Where is it going to be?" They would promptly answer, "In our house, in the play area off our garage." That's where the Italian name Casa Mia came from. 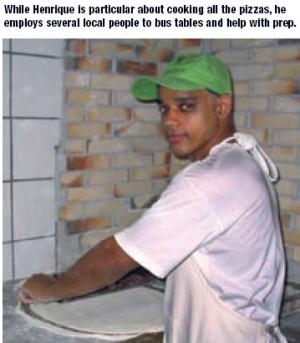 Henrique has more than 17 years of experience in the pizza business. He came to Itaperuna from Sao Paulo and according to him, all good pizzas in Brazil are made in wood-burning ovens. We talked about the advantages of the wood over gas or electric ovens and he explained to me that the economical side of it is a huge factor. The wood he uses is either from eucalyptus trees or from very affordable wood scraps. He went on to explain that the wood oven is a lot faster than any other kind. When well-heated, it bakes a large pizza in a minute and a half. The wood also keeps the pizza more moist. Two hours before they open their doors, he lights up the fire. As he fired up the oven, around 4:00 p.m., we watched large pieces of wood blaze with orange flames. I approached the oven door to take a closer shot with my camera and my face was immediately seared, so my first instinct was to refrain myself from going any further and I stepped back.

Henrique points out that the oven interior is made of soapstone and to my amazement he placed each pizza straight on the stone, without baking sheets. When it was time to serve his masterpieces, he placed them in a round heated tray, also made of soapstone. Henrique explained that watching his customers' reactions to his pizzas is what motivates him to continuously create the mouthwatering meals. He says that it's the main reason why he has an open kitchen. He also wants his customers to see what he is doing to the food that they are about to eat.

When I thought I had been wowed enough, he and his wife took me around the restaurant where, in an improvised flowerbed, they collect all the green stuff that they freshly add to each pizza. They grow the most common culinary herbs and vegetables like mint, chicory, oregano, basil, sage, green onions and rucola. They say each time they go to the front or the back of the restaurant, their regular customers know that they are in for a fresh, organic treat.

Norminda explained that the concept of handcrafted pizzas was created to stop the insanity of the fast food chains, which have been growing steadily in Brazil since the 1980's. The handcrafted pizza and food by the kilo were implemented as a way to attract their customers back to their business. They call it the "slow food" mentality, which is based on the fact that you should appreciate and slowly savor a very enjoyable meal.

Casa Mia is the talk of the town, so I asked Henrique to reveal his secrets. He confessed that his biggest pleasure is seeing his customers' expressions when they first see the pizzas, and that it's a lot of work that can only be accomplished if you really love and care for what you do. He also emphasized that television will never be a part of his restaurant, simply because he wants it to be a place where people enjoy each other's company and conversation. During colder nights – or maybe I should say less warm nights – there are candles on every table. I especially liked their soft music in the background. They play everything from Brazilian bossa nova to American pop hits.

Henrique and Norminda have not only convinced me that their restaurant is unique, but have also given me another reason to see my family and friends, so it was time to say goodbye with something like "Hasta la pizza, babe!"