Tips from the 'Pizza Jew': How to Build Your Instagram Brand - PMQ Pizza Magazine 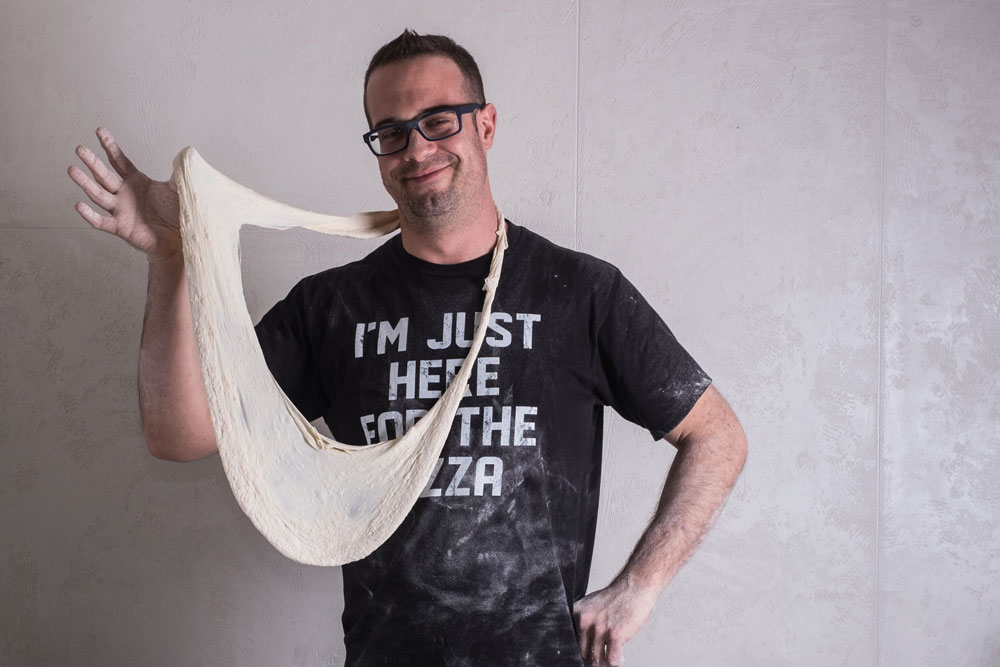 Social media is a fickle format—each post can feel like a scream into the void. But with thoughtful planning, genuine engagement and appealing content, pizzeria owners can use these digital marketing platforms to brand their restaurants—and even themselves. Just ask Michael Fitzick, the self-proclaimed “Pizza Jew” of Instagram.

Fitzick, who calls himself a “pizzapreneur,” runs a small catering company and hosts pizza pop-ups throughout New Jersey. He also works as a freelance consultant—or, as he puts it, a “pizza missionary”—for pizzerias and bakeries. On top of all that, he has become something of an Instagram celebrity, thanks in no small part to his mouthwatering pizza photos. For an audience of more than 24,800 followers, Fitzick posts pictures of his latest culinary experiments, from hemp-infused pies and pumpkin pizzas to sourdough focaccia and a spelt/rye batard with candied pecans and honey.

So why does he call himself the Pizza Jew? He’s not telling. “The origins of ‘Pizza Jew’ and the creation of my name are locked in a time capsule, dated to be opened in the year 2035 on my daughter’s birthday,” he says. “Only then will the secret origin of my handle be known.” 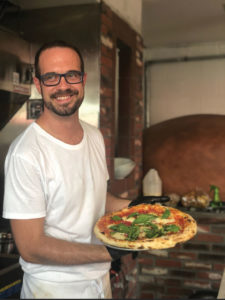 That kind of dry humor is part of Fitzick’s Instagram schtick—most of his posts feature some delicious-looking food item, a wisecrack or two, and the occasional expletive. He launched the account in 2015 and began by simply posting pictures of his original creations, from pizzas to cooked tuna. Persistence paid off as his recipes became more wildly creative and his follower base grew. A quick glance at his Instagram page today is like looking at a menu from a James Beard Award winner, complete with mouthwatering photos and descriptions of artisanal ingredients that might include honey radicchio, brandied onions or duck confit.

Yet Fitzick isn’t a classically trained pizzaiolo. “I started in the industry as a delivery guy at Manco & Manco Pizza in Ocean City, New Jersey, when I was a teenager,” he says. “During a shift, I had razzed a pizzaiolo all day about how redundant his job was. After [I kept telling him], ‘I could do this job, dude,’ and ‘That looks so easy, man,’ the pizzaiolo handed me an apron and said something along the lines of ‘Let’s do this.’”

Now a freelance pizza maker living on the beach in Margate, New Jersey, Fitzick hosts pop-ups in secret locations around the state and appears in pizza making videos for U.K. oven manufacturer Gozney. But wherever he may roam, his fans can always find him on Instagram, posting pretty much every day and showing off his pies, sourdough breads and more.

So what’s Fitzick’s advice to pizza restaurateurs looking to build an Instagram following for their brands? “I would initially focus on using local hashtags, such as the city the pizzeria is based in, and engage with [other] local shops and personalities,” he says. “It’s a great idea to collaborate with local socialites with similar interests as well. You can usually make it a win-win for both parties, especially local chefs that don’t feature pizza on their normal menus.”

Connecting with local followers—and potential customers—is essential, he notes. “You need to get people out of their house and give them a reason to come to you. I would suggest using just one [restaurant] account to reach customers, but spreading the word using your personal account can be advantageous as well.” 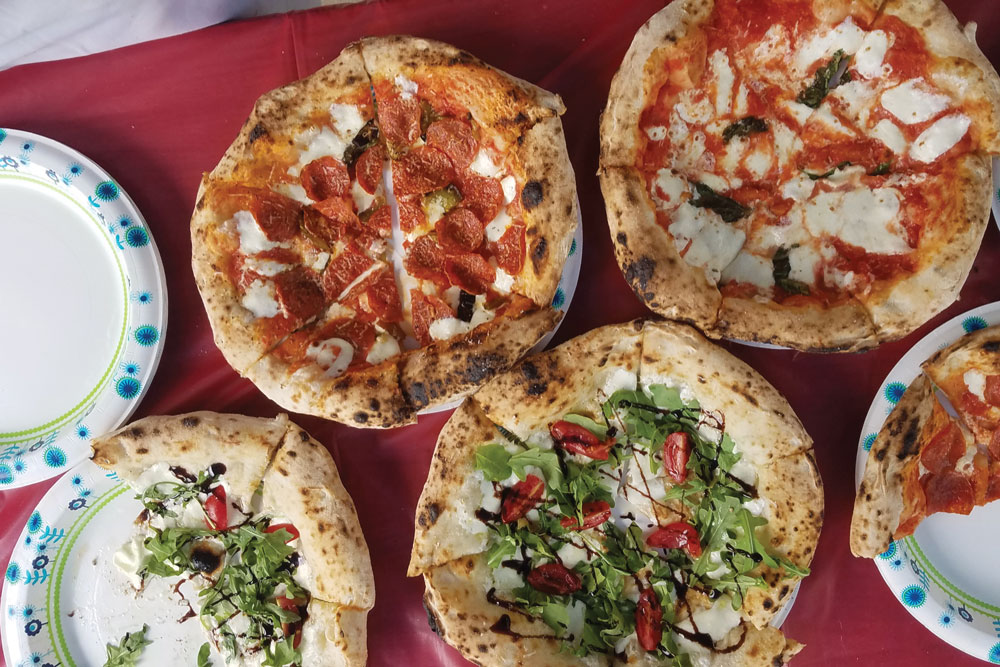 Appetizing pictures help draw in the crowds, too, of course. Snapping Instagram-worthy food pictures requires more than a simple point-and-shoot approach, but it can be done even with a cell phone. “Taking photos of pizza is actually kind of tricky,” Fitzick says. “First thing, you need naturally filtered light through a window or a lightly shaded area. Direct sunlight won’t work. The angle of the shot is important, too. If you’re taking an overhead shot of a round or square pie, you’re going to want to angle the camera—or phone, in my case—perfectly over the pizza. If your angle is off, the pizza will look distorted and confusing to the eye.”

He says he typically takes multiple shots of a single pizza “so I can sort out the winners…later on. A lot of these shots aren’t [from] technically planned photo shoots, so the organic nature adds some natural validity to the way they’re shot. I take a lot of photos, too. Choosing from a large assortment of pictures is tedious but usually yields the best results.”

For many YouTube pizza fans, Fitzick is a familiar face, appearing in numerous pizza making videos for Gozney. He says video is another great marketing tool for establishing authenticity and attracting crowds to your pizzeria. “But be wary,” he says. “Good videos are hard to make. I’m not into setting up a video shoot and making a huge thing about it. I prefer letting videos happen naturally in the spur of the moment. The best videos and stories should feel organic and unforced.

“It’s always cool to see impromptu stories of back-of-house operations, too,” he adds. “I love seeing different equipment running and all the techniques involved in the final executions. Alternatively, there’s nothing more boring than a staged pizza procession featuring a tired pizzaiolo reading off cue cards, telling me what to like and to subscribe. Don’t do that.”

Cultivating a social media presence is a fun challenge that can drive more traffic to your restaurant. But posting pictures of the same old cheese pizza won’t cut it. The pizzeria, like the posts, must appeal to customers with outside-the-box specialty pies to go along with the classics. “Technically, nothing is off-limits now,” Fitzick says. “However, even with that being said, things are still getting played out. You see the same stuff all over, over and over! Pizzaioli [should be] constantly looking for the next big thing. The new recipes are what keep things interesting—not only for the consumer but for the pizzaiolo as well. We get bored. After so many Margheritas, the mind grows weary and searches for different outlets of creativity.”

But creativity shouldn’t be forced, he adds. “The worst thing you could do is sit down and say, ‘I’m going to make a cool new pizza today, and it’s going to bang.’ You’ve already set yourself up for failure. The best way to come up with new ideas is to remain perceptive when you’re not around pizza. Keep an open mind when eating other foods. See what other people eat, and filter everything. Don’t be a sponge—don’t suck up everything you see and dump it on a pizza. It probably hasn’t been on a pizza before because it doesn’t work. Filter your flavors. Take a handful of this and that and then eat it together. Tastes like crap? Move on. Don’t go far for inspiration, either. Most of the time, a pizzeria is filled with [existing ingredients] just waiting to be sliced or sautéed and put on a pizza [in unexpected ways].”