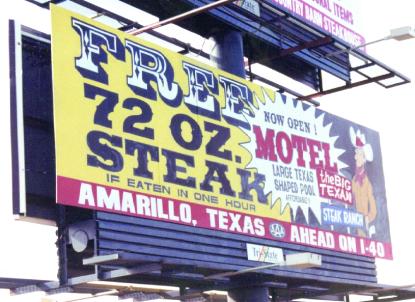 The Big Texan's signs can be found every 50-100 miles on every major road leading into Amarillo, Texas.

While driving to Las Vegas for the last Pizza Expo, I could not help but notice a particular restaurant's billboard that seemed to pop up every 50 miles or so. Perched on top of a hill or standing alone at the edge of an empty field was a bright yellow billboard telling me that there was a free 72-oz steak waiting for me in Amarillo, Texas. I started seeing them in Arkansas and by the time I was nearing Amarillo my curiosity was getting the best of me.

For the last 500 miles The Big Texan made sure I, along with everyone else on I-40 West, knew the name, location and what I could get to eat in Amarillo. What a great way to grind your restaurant's name into the heads of hungry travelers, I thought to myself. It was time to stop in Texas and talk to this guy. When I got there, the location was as eye-catching as the billboards: very Texan, very large and very inviting. The billboards had effectively done their job and the restaurant followed up on that promise.

I sat down and spoke with Bobby Lee, co-owner of The Big Texan steakhouse, and talked about his restaurant and his advertising. This guy has billboards on every major interstate and highway leading in to Amarillo from Colorado, Oklahoma, Kansas, Arkansas and New Mexico. "How much does this cost you?" I asked.

"I spend an average of $250 per billboard. I purchased most," Bobby said. "I spend about 6 percent (about $85,000) of my yearly sales on advertising. Eighty percent of my advertising goes into the billboards. I try to place them in areas where you cannot help but notice them, either on a small hill or in the middle of a stretch of lone highway. Every so often, I will place one on the left side of the highway because not too many billboards are aimed at drivers from there and they grab your attention." 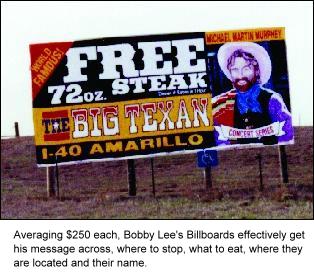 Bobby said he owns most of the billboards, so the next logical question was how much does it cost to buy the property from farmers or maintain them. He said he pays for many of his billboards' space on farms with a free steak dinner or two each month for the owner. Billboards are his primary advertising tools.

He isn't the only one who has used this strategy. Any one who has traveled in or near eastern Tennessee has had "See Rock City" burned in their memories. Stuckey's restaurant and gift shops have signs littering the interstates and highways to let travelers know how far they are from the nearest Stuckey's location.

Glen Anthony, owner of Racers Pizza in Jackson, Miss., recently rented a billboard one mile before you get to his location. "I have definitely seen an increase in traffic since I got the billboard, especially with people on their way home from work. The number of take out orders and orders called in on cell phones at or near 5 p.m. were noticeably up after I rented the billboard. Right now it costs me about $950 a month for the sign. There are 55,000 cars driving past there every day that are exposed to my store's name and where I am located."

If you are near an interstate or highway, don't overlook the thousands of hungry travelers who might otherwise drive right on to the next Taco Bell, McDonald's or pizzeria that thought it would be a good idea to put up a billboard to let them know they could stop and eat at the next exit.   PMQ