Pizza Mann is the name of Austria’s largest pizza chain. The 29 store franchise chain has an excellent product, strong operations, and creative marketing. 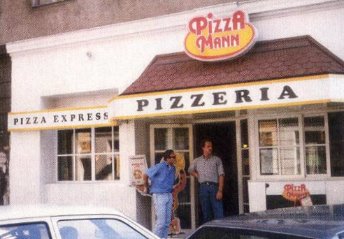 Their pizza is excellent. They have a thin style pizza with a special Austrian flavor, probably most similar to Papa John’s in overall presentation. Some of their toppings are unusual by American standards, but they have been demanded by the Austrians during the last ten years. Corn? Egg? Tuna? They don’t have pepperoni, but their salami is great. They also offer the more traditional toppings such as onions and olives as well. And, of course, Wiener Schnitzel. Also some very tasty desserts.

The stores are equipped with the latest equipment. At least two Lincolns are necessary to handle sales volumes well above the American store average. All stores are computerized and each employee answering the phone has a phone script that they are trained to read with a smile. They even have a monitoring system in place to ensure courtesy is given to each customer.

Their marketing is sophisticated. There is colorful and attractive marketing material everywhere: door hangers, menus and point of sale advertising decorates the lobby and dining areas of each store. Last summer’s promotions brought in a big surge of customers: a scratch card give-away of a BMW Z3 Roadster. Visit their web site http://www.pizzamann.at. 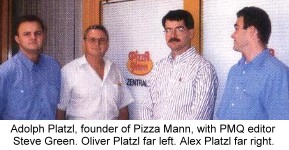 The stores are designed and decorated to be comfortable and very Austrian. The Platzl family knows what they are doing.

Adolph Platzl is the creator and force behind Pizza Mann. He entered the pizza industry only after proving his business acumen as the builder of a chain of sausage restaurants (a very competitive business in Austria). He runs the franchise company and two company-owned stores with the help of his young lieutenant and son Alex. His other son Oliver Platzl operates the Pizza Mann commissary system.

Pizza Mann’s marketing sophistication continues to be seen in their database marketing program. Their POS system is part of each store operation. Designed by the brilliant Austrian programmer Herald Gabl, Pizza Mann’s POS system feeds directly into a very capable strategic marketing program that can in turn direct mail to strategic target groups and then evaluate the success of each mailing and the impact of the messages delivered. At first, the Austrian Postal System seemed incompatible with database marketing until it was discovered, after much effort, that their system was remarkably similar to the U.S. postal system.

Pizza Mann database marketing capability is about equal to any U.S. chain at this point in terms of their ability to communicate with and understand customer behavior. However, they have a greater marketing opportunity ahead of them.

Austrian pizza consumers are not as jaded and scrutinizing as Americans are. Bulk mailing and direct mail are just in their infancy there and Austrians haven’t had time to develop consumer marketing immunities.

Pizza Mann is a company with a bright future. They know their business well and have a healthy respect for marketing. Viel Glueck, Pizza Mann!`

The Price of Success 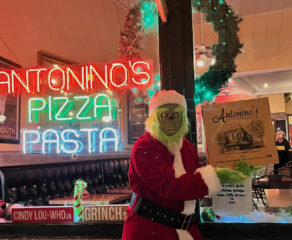 How The Grinch Saved Christmas at Antonino’s Ristorante