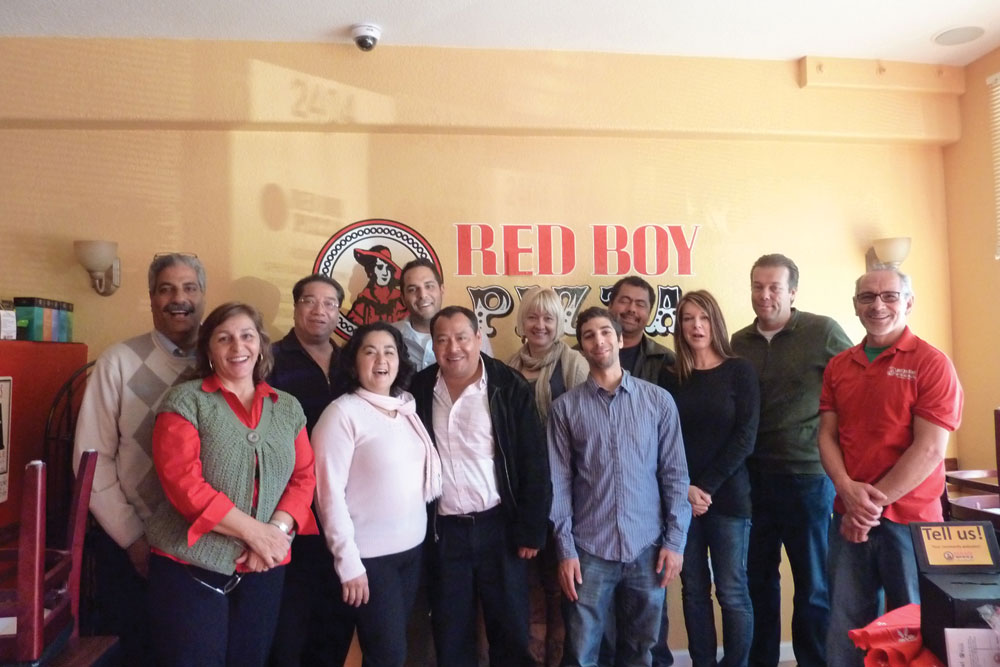 Red Boy Pizza (redboypizza.com), with eight locations in the San Francisco Bay Area, has been serving pizzas since 1969. Six of Red Boy’s locations are owned by franchisees. But the company needed a marketing boost and a strategy to ensure branding consistency from location to location, so my company, Duke Marketing, signed on to lend a hand. Our work with Red Boy makes a strong case study for any small franchise company looking to revamp its marketing and branding approach, so I’d like to share the results of our efforts with PMQ’s readers.

Red Boy Pizza hired us in June 2011, and we worked for more than a year with the company. In this month’s column, we’ll look at what we accomplished in the first six months of the relationship, including the strategies and promotions that were implemented and the results. In next month’s column, we’ll discuss the second six-month period and the fruits of our labor.

June 2011. We began by creating a survey for all Red Boy Pizza franchisees to gain their insights and determine their key needs and concerns. Their top priorities were sales promotions, business-to-business promotions, new lunch and dinner specials, and an enhanced company website. This survey provided a good starting point, making it easier to map out our strategy for the coming months.

July 2011. We made recommendations to update the overall look and feel of each restaurant. At the time, different locations sported different decor—one store had tan walls, while another had pink walls, for example. The Red Boy logo was nowhere to be seen, and key branding elements were missing. Therefore, each location got a fresh coat of yellow paint on its walls, matching the company’s logo, which is now prominently displayed with Red Boy Pizza’s taglines inside each location. The interior signage, POP and pizza pan displays (used to illustrate various pizza sizes) are now uniform, visible and consistent throughout each restaurant. The new look brought in new customers, and more people soon began to dine in at Red Boy Pizza.

August 2011. We took over the company’s social media management and built up its Facebook and Twitter activity. The company’s number of Facebook fans jumped by 100%. Meanwhile, since the eight-unit pizza chain had not solicited customer feedback for many years, we created guest comment boxes and comment cards for each location. Some franchisees were hesitant at first, unsure if they really wanted to know what their guests had to say. Fortunately, the vast majority of comments were positive, and the franchisees were pleasantly surprised. Meanwhile, we also began tracking each location’s Yelp reviews and provided franchisees with helpful instruction for handling negative posts.

September 2011. We launched Red Boy Pizza’s first companywide promotion in more than three years. The “Slice & Soda for $4.25” promotion, which took place during the back-to-school period, drew in many new customers and stimulated more frequent visits from existing customers. We designed fliers and posters for each store and created display ads that ran in local newspapers. Just one month after running the promotion, total sales increased by nearly 5%. “Slice and Soda” had already been a common Red Boy phrase, but each location had been charging a different amount and serving different sizes of slices. By standardizing the size and price, Red Boy Pizza made the promotion profitable and consistent at all eight locations.

We also developed a Monday Night Football happy hour promotion, which included a 50% discount on all beer and appetizers and a slice and soda for $4.25, between the hours of 4 p.m. and 7 p.m. This proved to be a popular and successful Monday night deal.

October 2011. Red Boy Pizza celebrated National Pizza Month and Breast Cancer Awareness Month by developing a new gourmet pizza, a Margherita, which was sold for $12.99 for a medium size. A percentage of sales went to the American Cancer Society. To ensure consistency at each location, we designed a laminated list of step-by-step instructions for making the pizza. We also designed fliers, posters, direct-mail pieces and email blasts for each location. Red Boy presented the American Cancer Society with a sizable donation, and sales increased for the month by more than 7%.

November 2011. We created Red Boy Pizza’s holiday meal promotion, called “Bundle Up for the Holidays.” This consisted of a bundled meal that included either a large two-topping pizza, large salad and beverages for two; or lasagna for two, large salad, garlic bread and beverages, with both deals priced at $27.99 through the end of December. We designed fliers and posters for each restaurant as well as an email blast that went out to Red Boy Pizza’s rewards members and Facebook and Twitter users. Sales weren’t quite as good as we’d hoped at all locations, but, overall, sales and transactions for the month were up.

December 2011. We organized a holiday food drive to benefit local food banks. Each customer who brought in a nonperishable food item received a free soft drink. The promotion garnered press in the local newspapers, and Red Boy Pizza collected 137 pounds of food.

Additionally, we developed a marketing strategy for the franchisees’ catering services. First, we designed $5 discount certificates, which Red Boy presented to nearby businesses to give away to their customers. We also developed catering packages and menus. Then, our team hit the streets, delivering free pizzas, certificates and catering kits to these businesses, including hotels, doctor’s offices, hospitals, fitness clubs, auto dealerships and other companies. The managers of these businesses were encouraged to give the $5 certificates to their favorite customers as thank-yous and, of course, were made familiar with Red Boy Pizza’s catering services, just in time for the holiday season. In the next two weeks, each restaurant began to see results—new customers showed up to redeem the $5 certificates, with one store getting more than 20 certificates brought in.

Also in December, we developed a sales tracking and reporting process to help the franchisor gather weekly sales data from every franchisee. Additionally, to ensure food consistency at each location, we arranged for a single distributor to provide product for all eight stores, resulting in a 2% savings in food costs. Finally, we conducted a strategy and planning session for the upcoming year, scheduling marketing initiatives for the first six months of 2012. We’ll tell you more about that in the next issue of PMQ!

Linda Duke is the CEO of Duke Marketing and author of Recipes for Restaurateurs (marketing-cookbook.com), a “cookbook” of marketing ideas for restaurant owners. She publishes a quarterly industry resource, Restaurant Marketing Magazine, and an educational program, LSM-U, Local Store Marketing University. Find out more at dukemarketing.com.