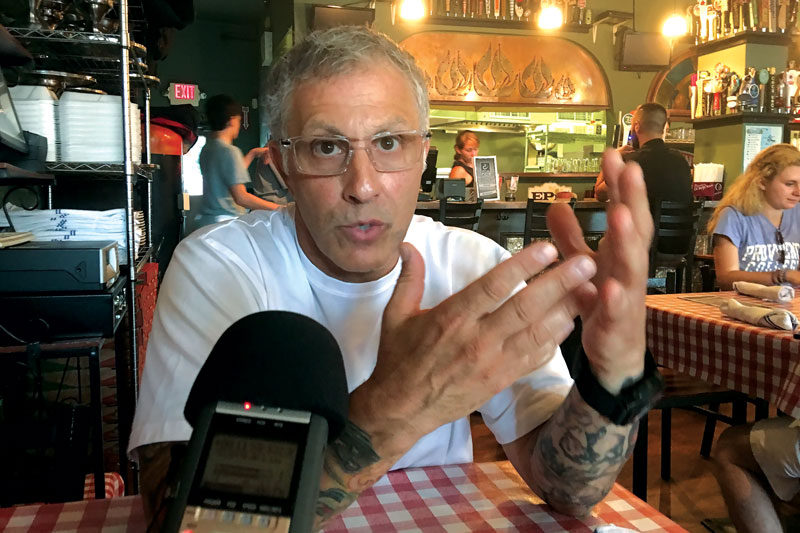 Editor’s note: This article originally appeared in the November 2016 issue of PMQ Pizza Magazine. We republish it today because it’s still chockful of good advice.

A former tobacconist and brewer turned dough wholesaler and pizzaiolo, William “Billy” Manzo Jr. knows his way around human taste buds. And the popularity of Federal Hill Pizza in Warren, Rhode Island, reflects his decades of experience studying flavor profiles, artisanal techniques, and the science and art of dough making. I paid a visit to Federal Hill recently, striking another item off the PMQ Bucket List. Manzo gave me full access to the restaurant, shared his stories and strategies, plied me with amazing food, and even gave me a tour of his next shop, located in an old movie theater in Providence. Here are the 10 most interesting things I learned during my visit with Billy:

1. How to score free silverware.

When restaurant staffers toss dirty linens in the laundry bin, silverware often gets thrown into the mix. That gave Manzo an idea. “I went to my linen company and said, ‘So where do you keep all of your silverware?’” he says. “They looked at me like, ‘How did you know that?’ They brought me to a room filled with about 700 pounds of forks, knives and silverware. I took as much as I could carry out to my car. Now, every year, I go back to my linen guy and never have to pay for knives, forks and spoons. Otherwise, he’d just scrap it, so I’m doing him a favor.”

Manzo believes electric ovens are more cost-effective and energy- efficient than gas ovens. “I’ve saved an average of $426 a month by switching from gas to electric,” he says. “Electricity is safer. It’s contained, and it’s a cleaner burn. It’s also easier to clean and saves me several hours of cleaning work on the weekends. That adds up. Everyone should take the time to compare the costs of running gas versus electric.”

Although Federal Hill Pizza opened relatively recently, in 2005, it has the cozy look and feel of a much older place. “I grew up in the flea market industry,” Manzo says. “My grandfather was the original rag man. I’ve learned that, just because you’ve got half a million dollars to spend doesn’t mean you have to spend all of that money to make your place look really cool. When a chair is worn and beat-up, it has a personality and a history. It has memories. When you have a little nicked-up copper bar, it speaks to you. When you’re outside my pizzeria and look at the place, you’re looking at Grandma’s house. It creates those warm memories. If you can put your brand in a position where you’re selling memories, it’s priceless.”

4. A solid culinary foundation is a must-have.

If you’re looking for Neapolitan-style fried squid or Cambodian chicken wings, Federal Hill Pizza is the place for you. Manzo has also experimented with so-called “garbage pizza” in response to customer demand. “My loyal customers were pushing me to try different foods,” he recalls. “I didn’t even like garbage pizza, but it was a learning experience for me. It all comes down to having a strong culinary foundation. It’s about knowing flavors, sweet and sour, savory, salt and pepper, etc. We finally created a white pizza with shredded cheese, added some Frank’s Original Red Hot Sauce, our own rendition of an Asian peanut sauce, a sweet teriyaki, a Thai, then finished it with creamy Pecorino Romano and basil. It was an absolutely amazing product, and we sold a ton of it.”

“They normally have horrible food—premade chicken fingers, mac and cheese, filler food just to keep the kids happy,” Manzo says. He prefers to offer smaller versions of a few existing menu items at a lower price point. “Kids really love food, but you have to present it in a way that they will enjoy. They’re very visual, so give them something they will enjoy looking at.” Federal Hill customers rave about Manzo’s rice balls, “but they’re huge. You can’t pick them up. They’re not cool for a kid,” he notes. “So I decided to make them about the size of a golf ball. They’re two ounces, softly deep-fried with risotto, prosciutto and pancetta. The kids order them because they can pick them up and hold them in their hands. We have parents order them the night before, and kids take them to school and eat them cold. Not one kid has ever said he didn’t like them.”

“If you can put your brand in a position where you’re selling memories, it’s priceless.”
—William Manzo, Federal Hill Pizza

Manzo makes novel use of an outside chalkboard to grab the attention of passersby. “We’ve got 150,000 cars a week flying by my place,” he says. “You don’t have to fill your chalkboard with different images to catch their eye. Psychologically, people already expect that when it comes to marketing and advertising. I do the opposite. I’ll put a smiley face or just one word, like ‘politics’ or ‘rain’ with a frown. People will call in or go on Facebook and ask, ‘Why did you use that word?’ Or they come in and say, ‘I had to come in because I saw that smiley face.’ It gets people talking and shows them there is a personality behind the door.”

“Being 52, I grew up in the era when owners would walk around the dining room in their suits, shaking hands with customers, knowing everybody by name,” Manzo explains. “I learned in the cigar industry that a hand on the shoulder, a little eye contact, knowing somebody’s drink—these little details make customers happy. When I’m in the restaurant, I go around and thank everyone in the dining room for coming in. Many times, I’ll grab my head pizza chef and say, ‘Get a clean apron on and let’s go into the dining room.’ There’s a plethora of information coming from your customers, and when they warm up to you, they will teach you. They’ll give you all of that analytical information. Each person is a dictionary of likes and dislikes.”

8.  Don’t be afraid to go underground.

McDonald’s U.K. last year was so troubled by rumors it had a “secret menu” that the company went on Twitter to bust the myth. But Manzo has a secret menu that’s not so secret. “Consumers who come here all the time know we have a private menu and order off it,” he says. “It’s got five items, including an Italian eggplant egg roll, spicy garbage wings, and a fried meatball with a piece of smoked mozzarella in the middle. When customers find out about the menu, they feel special. They feel cool. And they spread it around on Facebook and other social media and help us create a buzz.”

9.  Turn down your TVs and turn on closed-captions.

Growing up, Manzo knew many people with learning disabilities and other disadvantages. “I just found it natural to lower the volume on our TVs and to always turn on the closed captions. There are many people with hearing problems in this area, and they are so glad I do this. A lot of parents like it, too, because they can use it to help their kids learn to read while they’re in the restaurant. I get a lot of compliments about it. People dig it.”

Manzo has an analytical mind and loves to experiment, tinker and make new discoveries. He can talk to you about achieving the right pH balance and how various aspects of your water can affect your final product. “I’m constantly adjusting my formula,” he says. “Pizza is a living organism. If you don’t constantly watch your living organism, you’re losing out. Pizza is the easiest thing to make, but it’s one of the hardest things in the world to perfect.”