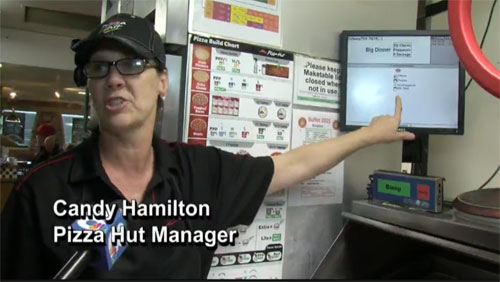 There was a pizza crime wave going on this week. First, a Florida mom kept her head while being held hostage. She used her Pizza Hut app to order a pizza and alert the police to her plight. Then some Alaskan pizza thieves staked their claim to Darwin Award fame and monumental stupidity when they called the cops and asked them if they'd like to buy some of their pilfered pies.

But our pizza planet is part of a compassionate universe as demonstrated by theology student and part-time pizza delivery guy Josh Lewis. Lewis promptly forgave the creep who stabbed and robbed him while he delivered a pizza to a Louisville, Kentucky, hospital. Lewis even made sure the pizza he was delivering before his assault was delivered to his Spinelli's Pizza customer. Politics is not always synonymous with crime but top Republican presidential hopefuls know the Pizza Ranch chain in Iowa might be the key to successfully breaking in the White House in November 2016.

Can you get a healthy pizza at one of the pizza chains? Yahoo.com says duh! They lay out the options. Pizzeria promoting season is never over and Dayton, Ohio, restaurants, sponsored by the Dayton Business Journal, have taken a page from college hoopsters with their Pizza Madness event. Slice of Hope is an opportunity for pizzerias to feed the hungry and bring a real moment of joy to folks in shelters in 25 states across America. Finally, the King of Pizza Nerds Mark Kuban is now operating his own pizzeria proving that critics and bloggers can do much more than write about their favorite subjects.

Sal & Mookies has moved from the city to the coast–not that city and not that coast. They've taken their delicious New York-style pizza from Jackson, Mississippi, to the Gulf Coast and Biloxi, Gulfport.