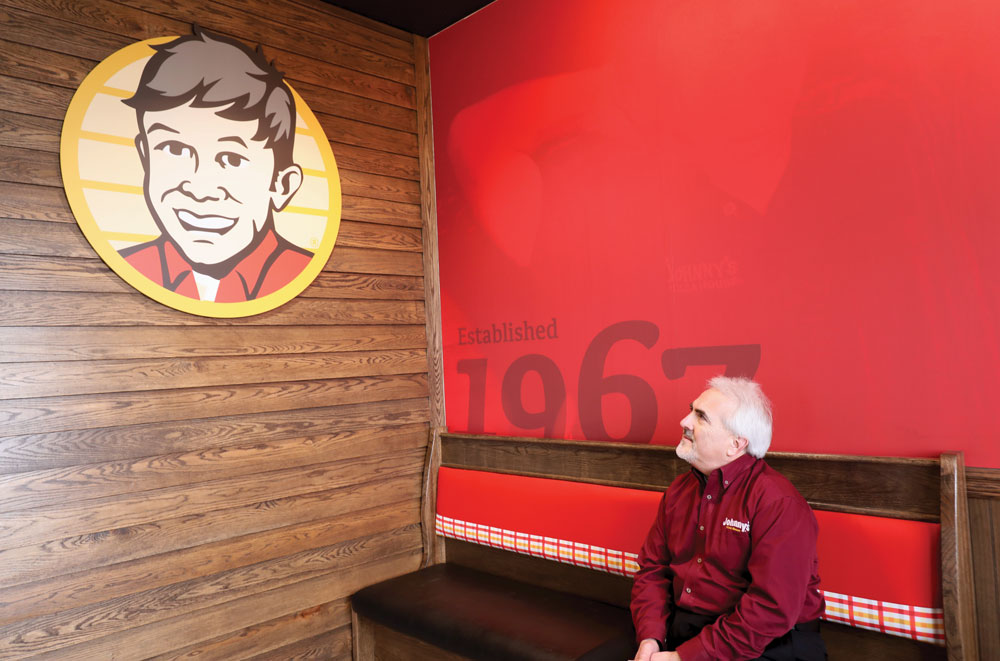 Melvin DeLacerda reflects on the legacy of the late Johnny Huntsman.

Most family-owned pizza companies stay in the family when the founder passes away. Johnny’s Pizza House, headquartered in West Monroe, Louisiana, is no different, except that its founder, the late Johnny Huntsman, had a really big family—and we’re not just talking about kinfolks.

A lot of business owners claim to treat their employees like their own children, but the employees don’t always see it that way. That was never a problem with Huntsman, who opened the chain’s first store in 1967. Long before he died in June 2017, Huntsman started laying the groundwork to pass his company on to the hard-working, dedicated folks who helped make it a success, transforming Johnny’s into an employee-owned business and setting the stage for continued growth and innovation well into the 21st century.

“A True Man of the People”

Huntsman’s face will look familiar to longtime PMQ readers. He was featured on the Spring 2000 cover and in a second article in August 2007. A true marketing innovator who worked every angle, from video poker games in his restaurants to a popular Guilt-Free Pizza made to the specifications of the Sugar Busters Diet, Huntsman was a former football coach with a fondness for trick plays and rolling the dice. “Forward-thinking is a very accurate description of Johnny,” says Johnny’s Pizza House president Melvin DeLacerda. “Johnny was never fearful of taking the first step in original or uncommon endeavors.”

Huntsman was well on his way to becoming a pizza legend even before he hit upon his plan for 100% employee ownership of the Johnny’s chain. After hitting a peak in the 1980s with more than 40 restaurants in Louisiana, Mississippi and Florida, the company fell on hard times and had to file for Chapter 11 bankruptcy in late 1989. The Monroe Times ran a front-page story with a screaming headline about the move, hurting business significantly since many customers assumed Johnny’s had gone out of business. Huntsman’s savvy response: He stood out on the busiest intersection in Monroe clad in a plastic barrel ($9 from Walmart) and suspenders, holding a sign that read, “Please Eat Johnny’s Pizza.”

“The only thing I could think of was to get some free publicity,” Huntsman told PMQ in 2000. “I didn’t want to make a big stink and sound bitter, like I was whining about what the newspaper did to us.” But he did make a few calls to local media before he went out in public wearing his preposterous outfit, and they showed up in full force to cover the spectacle. Sales immediately shot back up in Monroe, so Huntsman cruised over to Shreveport and pulled the same stunt.

“It was just like a faucet had been turned back on,” he said. “I’d like to say that it had been a brilliantly thought-out plan, but in reality it was a complete act of desperation.”

The company paid its way out of bankruptcy in less than a year by closing some of its less profitable out-of-state stores.

“Without a doubt, Johnny was one of the most charismatic people you could meet,” DeLacerda says. “He easily became a local celebrity, and many of his longtime customers considered him a true friend as a result of his approachable and outgoing manner. Along with being a pillar in the community, Johnny’s relationship with his many employees throughout the years is strong evidence that he was a true man of the people. You’d be hard-pressed to find an employer who garnered as much respect and admiration from his employees as Johnny.”

And Huntsman respected his employees in return. So much so that, after running the business more than 30 years, he decided to turn it over to them, especially since he didn’t trust potential buyers to take care of them. “Because the company had grown to a certain size, only larger pizza chains were in a position to purchase it, and they would certainly eliminate some of the personnel that were instrumental in helping build the company,” DeLacerda says. “When Johnny’s attorney and CPA mentioned a little-known employee benefit plan—an Employee Stock Ownership Plan (ESOP)—that allows company stock to be purchased by the plan on behalf of the employees’ retirement, he started investigating this option.”

Governed by many of the same rules as a 401(k) plan, an ESOP is a defined-contribution employee retirement plan that gives workers ownership interest in the company. Essentially, the company sets up a trust fund and contributes to it shares of its own stock or cash to buy existing shares. The ESOP can also borrow money to buy new or existing shares, with the company contributing cash to the plan for repayment of the loan.

An employee becomes a participant in the ESOP after working for Johnny’s for one year and becomes fully vested after three years. Unlike a 401(k) plan, employees don’t have to pay anything into the plan.

“When Johnny started the ESOP in 2000, he did so by selling 36% of his personal stock in Johnny’s Pizza House,” DeLacerda explains. “Over the next 18 and a half years, the company, or the ESOP, steadily purchased shares from Johnny and the remaining shareholders, culminating with the December 2018 purchase of the remaining 2,750 shares held outside the company.”

“With the company now 100% owned by the ESOP, large S-Corp distributions [to shareholders] are no longer necessary, and the cash can now be used to open new locations and expand into new markets.”
— Melvin DeLacerda, Johnny’s Pizza House

Johnny’s Pizza House presently has 33 corporate-owned stores and 10 franchise locations, with plans to add another corporate location and possibly two franchise operations in 2019. According to DeLacerda, the employee-owned model can spur even more growth for the company since Johnny’s is a S Corporation owned by an ESOP. With an S Corporation, liability for federal income tax is passed through to the shareholders. In a typical S Corporation, the shareholders receive distributions (similar to dividends in a C Corporation) in amounts that, at the least, cover their tax liability. As a qualified retirement plan recognized by the IRS, an ESOP doesn’t pay federal income tax either. “Instead, taxes are paid by the plan participants when their account is distributed, usually after retirement or termination,” DeLacerda explains.

A typical S Corporation has to shell out large amounts of cash in distributions to its shareholders, but that’s not the case with Johnny’s. “With the company now 100% owned by the ESOP, the large S-Corp distributions are no longer necessary, and the cash can now be used to open new locations and expand into new markets.”

The ESOP plan has other advantages, too, especially in terms of retaining top-quality employees who are genuinely invested in the company’s growth and success. “The most obvious positive effect on retention…is the benefit of providing employees a retirement account with no contribution from them,” DeLacerda says. “Less obvious but possibly more powerful is the ownership culture that goes along with knowing the employees are the sole owners of the company. We have a communications committee that helps explain the ESOP to employees and engages them in activities that promote that ownership culture, including informative meetings, company-wide picnics, management golf tournaments and fundraising walks and cookouts.”

Even before he conceived of the ESOP plan, Huntsman ran an “employee-centered business” and developed a system—still in place today—to ensure that managers feel a “sense of ownership,” DeLacerda says. “A separate income statement is prepared for each location, and managers, along with their assistant managers, are paid a meaningful portion of the profit from the restaurant where they work. This has created a culture of management seeing the big picture of what it takes to run a successful business.”

Huntsman also instituted a program that pays a portion of tuition for employees attending college, with no restriction on the courses they can take. That means many of those employees end up leaving Johnny’s to pursue careers in entirely different lines of work, but Huntsman didn’t mind that. “Johnny knew that while they were employed with the company, he had an upstanding and dedicated worker who was preparing to be a virtuous member of society,” DeLacerda says.

While many companies view employees as “human resources,” Huntsman saw them as entirely human—and that has been a key secret of the 50-plus-year success of Johnny’s Pizza House. Valuing your people as actual people can pay off long into the future, according to DeLacerda. “Johnny gave employees the freedom to make decisions and supported their decisions even if it wasn’t the best choice,” he says. “By delegating and not micromanaging, he allowed employees to learn and grow into future leaders for the company.”