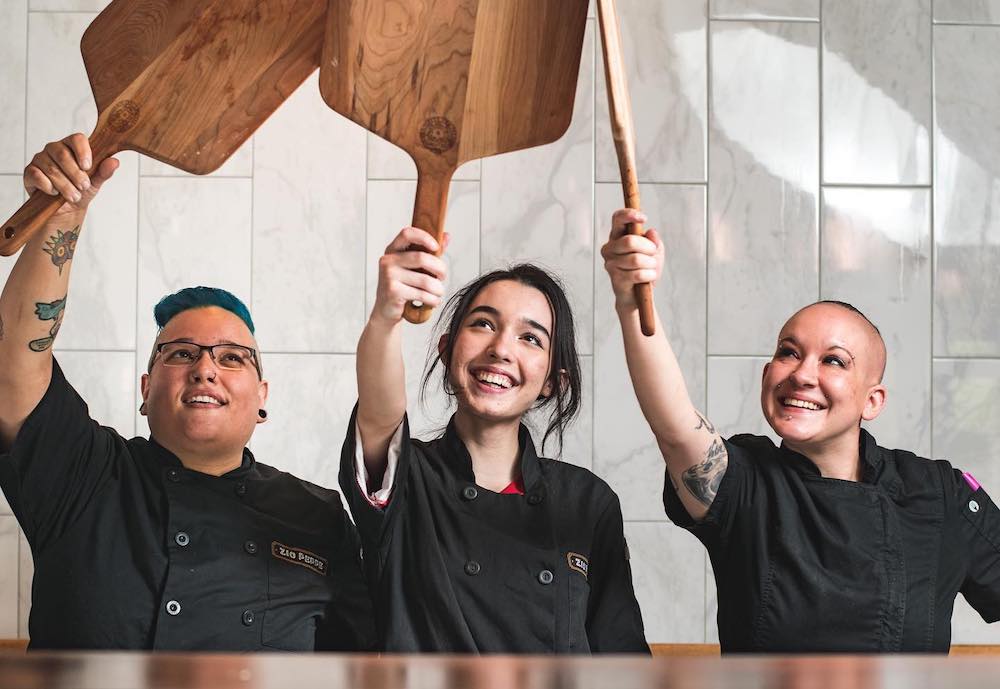 Members of the all-female Pizza Riot team at Zio Peppe go by their first names: Koda, Sam, and Steph.

Related: This sister act can outperform the men on any culinary stage

The owners of Zio Peppe in Tucson are both male, but women run the pizza kitchen. They’ve even given themselves a collective nickname: Pizza Riot.

As Tucson.com reports, Zio Peppe’s co-owner Devon Sanner believes he just might have the only restaurant with an all-woman pizza-making staff. The restaurant opened for carryout and delivery in May and began offering dine-in on June 1. Its social media prominently features the pizza-making women in dynamic photos as the restaurant’s “rock stars.”

Zio Peppe means Uncle Joe in Italian. The pizzeria’s name pays tribute to co-owner Mat Cable’s uncle, Joe Sottosanti, who opened Tesseo’s Pizzeria, a Sicilian joint, about 50 years ago in Tucson, according to Inside Tucson Business. “Uncle Joe is a trailblazer,” Cable told the publication. To which Sanner added, “He still carries that 1970s De Niro swagger.”

Despite the strong feminine presence in the pizza kitchen, Sanner and Cable describe their concept as a “bromance restaurant” and a “love letter to Tucson,” which UNESCO has designated a World City of Gastronomy. Both men are restaurant veterans. Cable has owned and operated Fresco Pizzeria & Pastaria in Tuscon since 2008, while Sanner has served as chef at restaurants like Janos, JBAR, Downtown + Cocktails and the Carriage House. They are founding members of the Gastronomic Union of Tucson, an affiliation of chefs and culinary artisans that seeks to honor Tucson’s culinary heritage and foster innovation and creative exchange.

Among the pizzas prepared by the women on the staff are the Figgy Stardust (figs, mesquite-smoked bacon, fresh mozzarella, honey and chamomile goat cheese, and a pomegranate drizzle) and the Prickly Pickle (nopales, cholla buds, red onion escabeche, Bacio and guajillo crema).

Some of Zio Peppe’s ingredients come straight from the desert. Nopales, in case you didn’t know, are prickly pear cactus pads. As for the cholla cactus buds, they’re pickled. “I’ve done pickled cholla buds in other guises for some years now, and Mat and I decided to do something fun with them,” Sanner told Inside Tucson Business. “We ended up using pepperoncini brine in the pickle, and it was like magic when we tried it. The natural artichoke and asparagus flavor profile of the cholla buds played well with the sharpness of the brine.”