Known for a wild party vibe and irreverent menu items like the Cheezus Crust, Mikey’s Late Night Slice in Columbus, Ohio, made the cover of this month’s PMQ Pizza Magazine. But there’s more to Mikey’s than drunk food and dapper dudes in black t-shirts. In honor of Mikey’s co-owner and marketing mastermind Jason Biundo, we pored through the company’s Facebook page in search of our favorite pop culture-inspired memes. From laugh-out-loud Free S#!t Friday pics to spot-on parodies of our favorite comic-book superheroes, we found more than we could fit into one article, so don’t be surprised if we come back with 10 more later in the year! 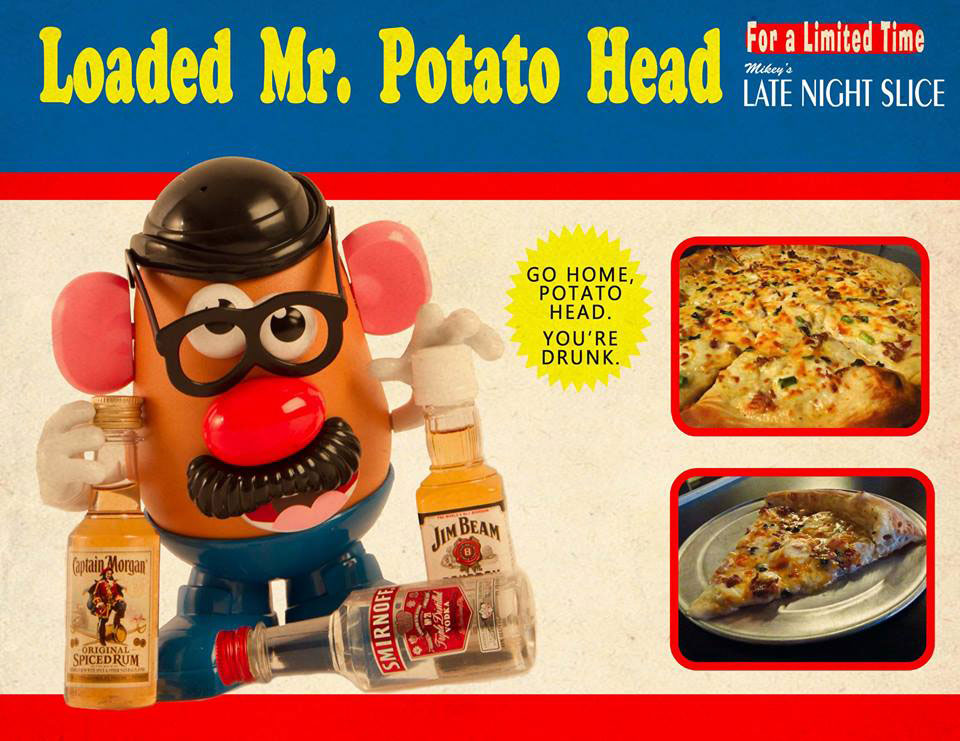 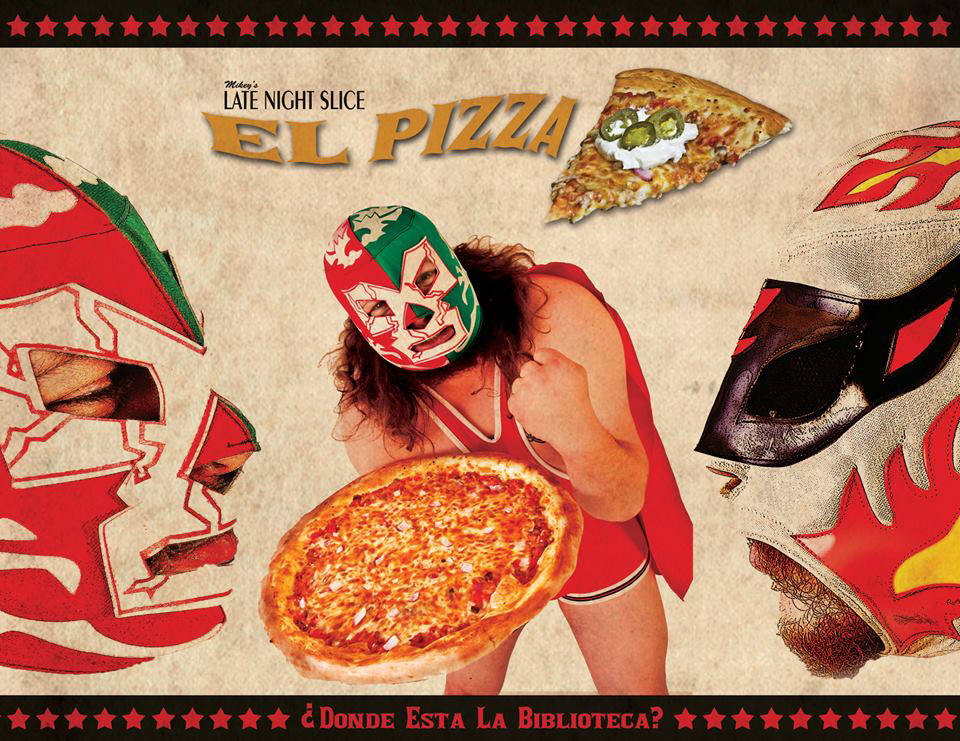 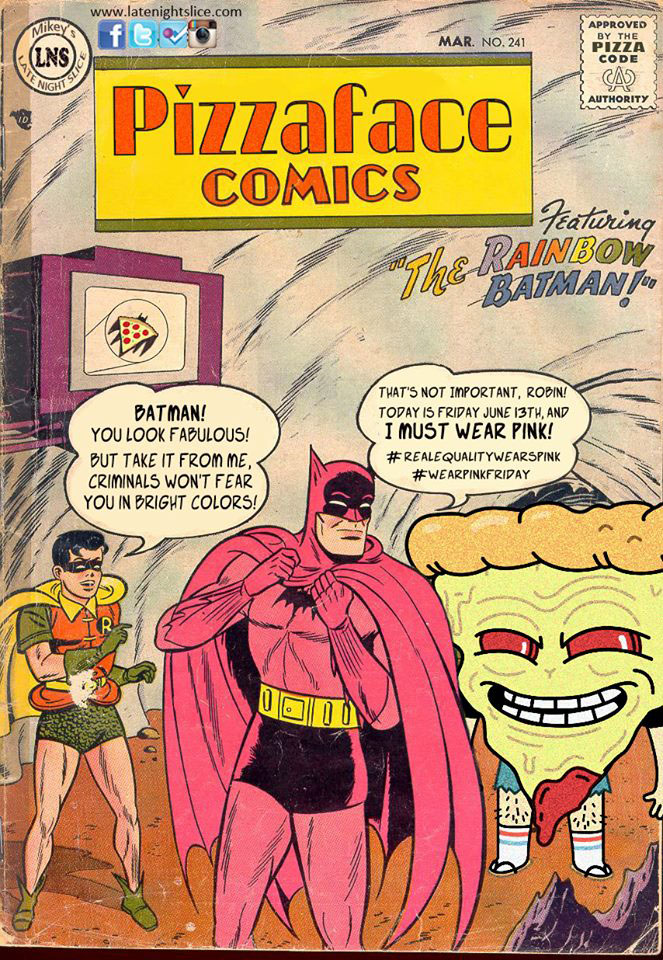 The Rainbow Batman
Mikey’s Late Night Slice took a stand against LGBT violence with this Batman-themed winner created for #wearpinkfriday. The Dark Knight doesn’t look quite so menacing in pink, but we still wouldn’t rob a bank in Gotham City with him around. So is Pizzaface a good guy or a new villain in the dynamic duo’s Rogues Gallery? With that grimace and those blazing-red eyes, it’s kinda hard to tell. 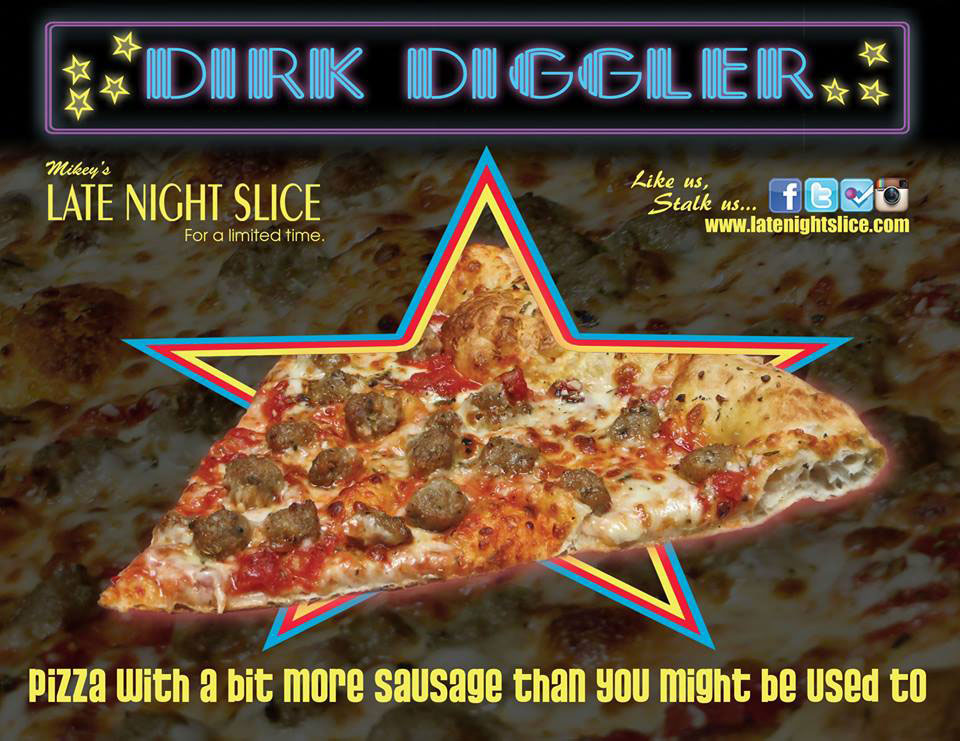 The Dirk Diggler
Described as a pie with “a bit more sausage than you might be used to,” the Dirk Diggler, inspired by Mark Wahlberg’s magnificently endowed character in Boogie Nights, truly is a meat-lover’s dream-come-true, even if it’s only got one type of meat. 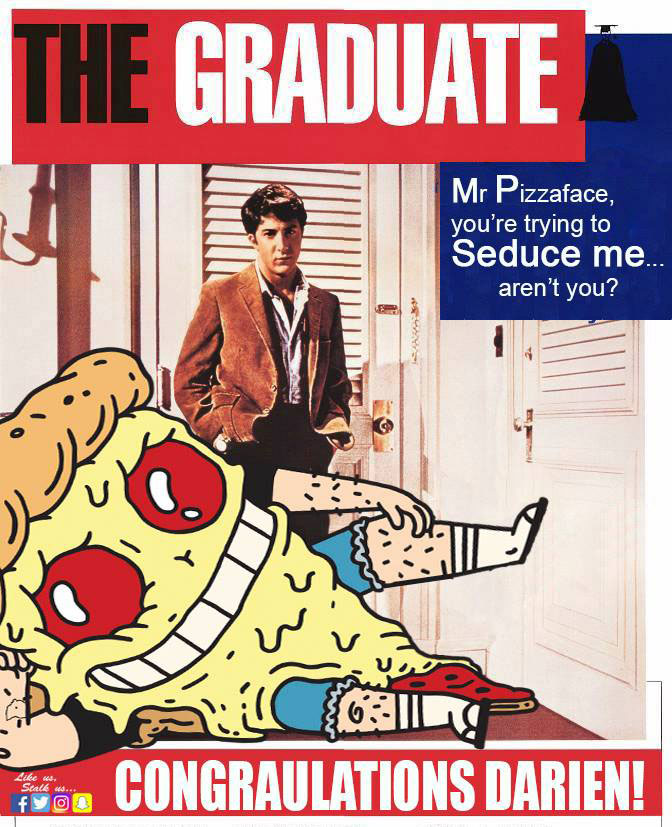 The Graduate
When Mikey’s marketing mastermind, Jason Biundo, turned meme-making duties over to his assistant, Darien Fisher, he created one last doozy in his protégé’s honor. Here’s to you, Mr. Pizzaface! 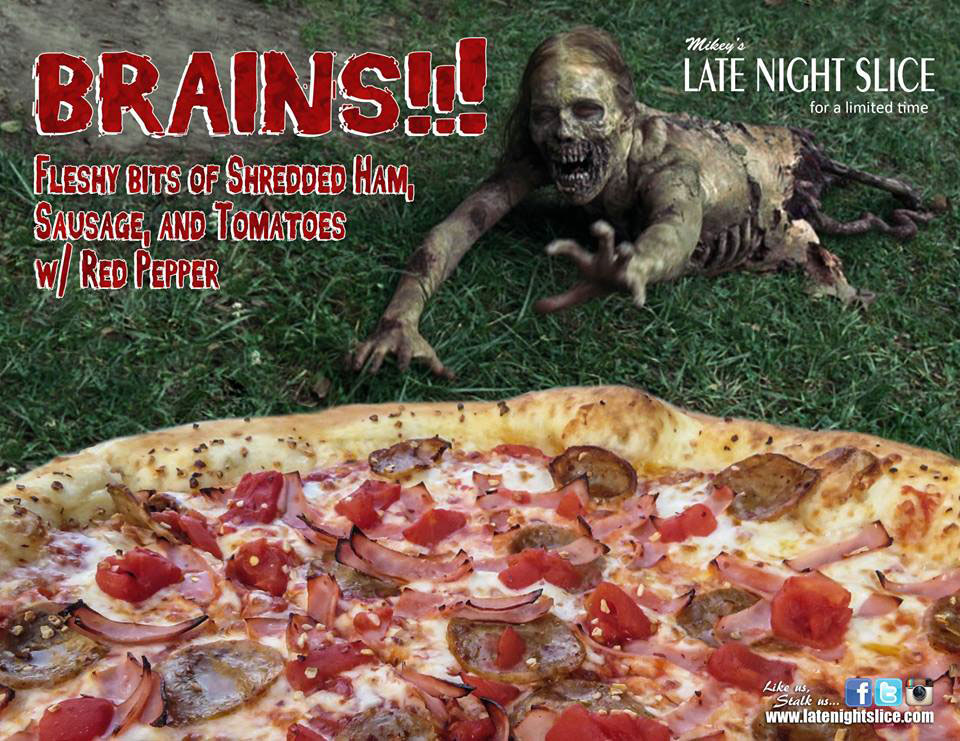 Brains
God, that’s just gross. But you can’t deny its genius. Will this legless walker finally get its withered, rotting claws on a slice of Mikey’s signature “Brains” pie before Daryl plugs it in the skull with an arrow? Would it rather have a bite of Carol’s cookies made of acorns and beets? What would you choose? 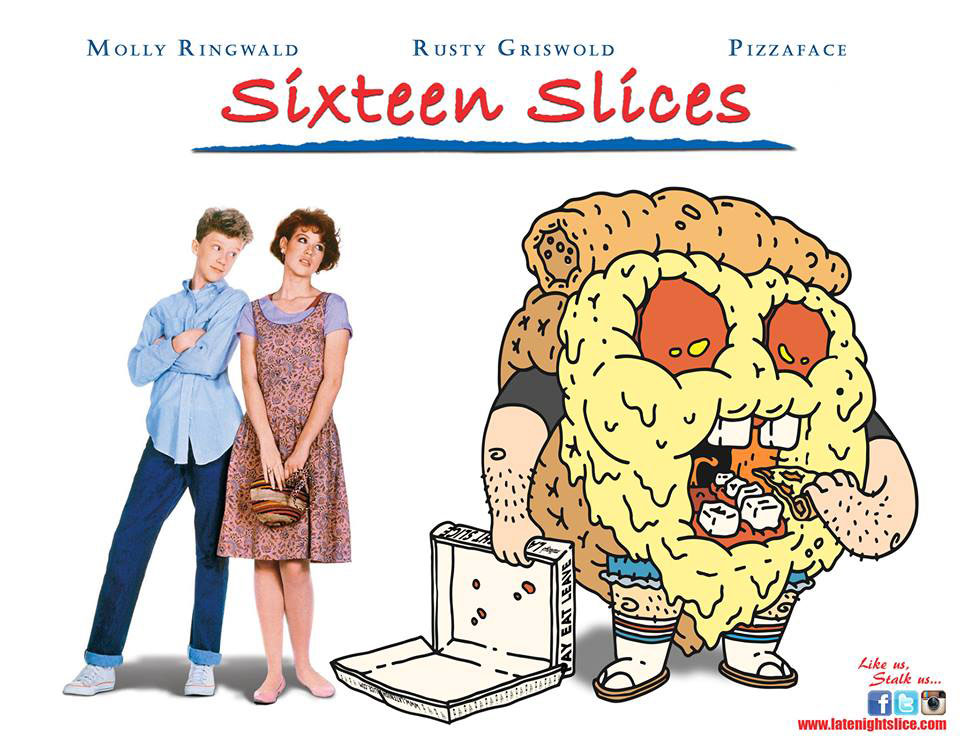 Sixteen Slices
The ravenous Pizzaface plays himself in this version of the classic John Hughes film—er, meme … whatever you call it. As Long Dong Duk would say, no more yankie my wankie—the Donger need pizza! 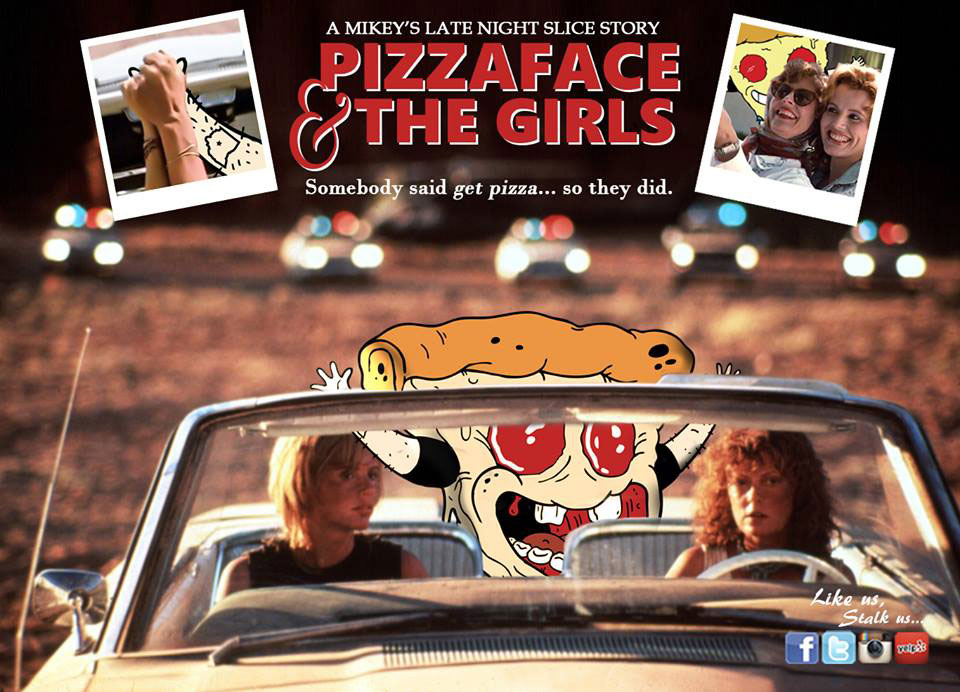 Pizzaface & The Girls
He’s no Brad Pitt, but Pizzaface does have a certain animal magnetism. Hairy legs. A devil-may-care grin. A little bit of sauce dribbling from his chin. We can totally see him catching a ride with Thelma and Louise—and driving them right off a cliff.

Wilbur’s Revenge
That Wilbur’s SOME PIG. You might even say he’s TERRIFIC! But his best friend gave her life to save the anxious porker from the slaughterhouse in Charlotte’s Web, and now payback’s gonna be hell. Well, OK, maybe not. This pizza actually comes loaded with ham, bacon and sausage, so we’re not quite sure how that adds up to revenge from a pig’s point of view, but we’re going to go along with the joke anyway. 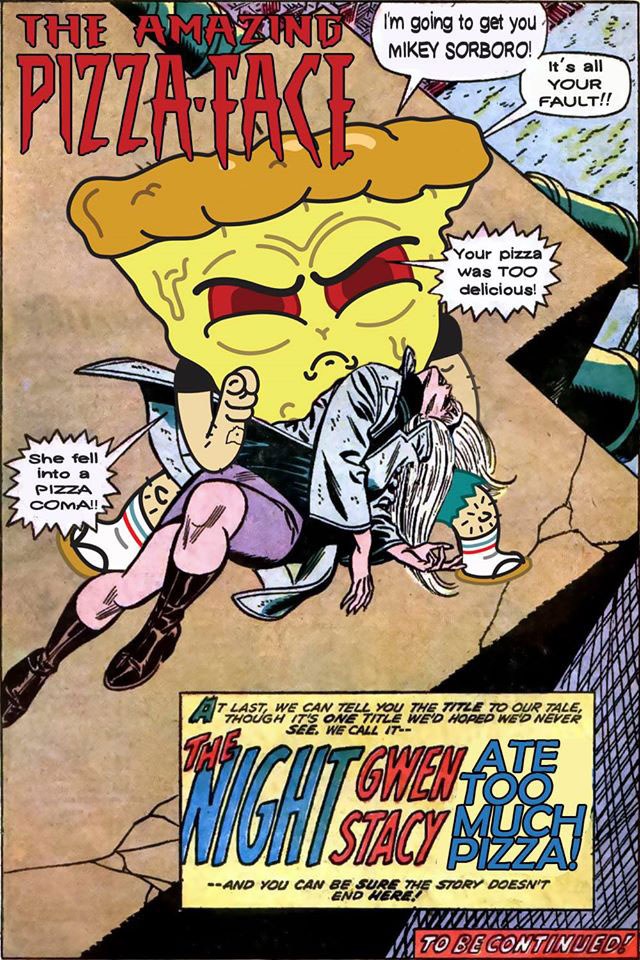 The Amazing Pizza-Face
The death of Gwen Stacy in The Amazing Spider-Man #121-122 traumatized us in childhood. Now we’re having to relive it again, and it’s all Mikey’s Late Night Slice founder Mike Soboro’s fault. His pizza’s just too damn tasty. Pizzaface is going to get you, Mikey!