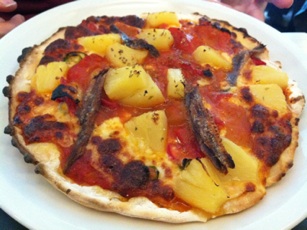 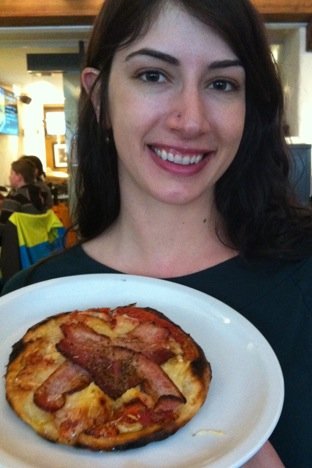 Hot chocolate, yodeling, clocks, secret bank accounts – Switzerland is known for a lot of things.  But what about pizza?  I visited La Pizzeria in the Swisscapital of Bern to find out.

La Pizzeria is the oldest pizzeria in Bern and the second oldest in all of Switzerland.  Julio Alvarez, head chef and GM at La Pizzeria recalls that when the pizzeria first opened its doors in 1968, the line wrapped around the building with customers eager to try the novel new food.  Owner Cristian Gfeller traveled to Naples to learn how to make pizza before opening his shop in Bern.

In general, Swiss pizza makers strive for an Italian-style pizza.  As Italy is just on the other side of the Alps, there is a strong pressure to replicate what Italians have already invented.  Pizza is served on a dinner plate in individual sizes with a fork and knife.  However, Switzerland takes its own twist on pizza, making use of its alpine cheese gruyère and emmental at times entirely in place of mozzarella.  These cheeses which you may recognize from fondue have a bolder taste than mozzarella and are more commonly found as the main pizza cheese in rural Switzerland.  The pizza pictured above is topped with gruyère and emmental, plus a few slices of bacon.  These are reminiscent of the cured meats (another mountain classic) often served alongside fondue.  Together on a crispy crust, toasted on the bottom (as cheese at the end of a fondue pot!) this pizza was amazing.

In line with always bringing innovative products to its guests, La Pizzeria added a homemade gluten-free crust to their menu only a year and a half ago and proudly sells 4 or 5 gluten-free pies per day.  Gluten-free as in the U.S. is trending among Swiss pizzerias.  A celiac friend living in Zurich affirms that Switzerland is well advanced in offering a wide-range of gluten-free products at supermarkets and restaurants at least compared to her native Holland.  Pictured on the right is La Pizzeria's gluten-free pizza topped with anchovies, pineapple and spicy peppers.

In the last 9 months, Gfeller has expanded his pizzeria to now include a variety of 6 different cuisines in 3 dining rooms called Platform Restaurants. The pizzeria which offers a rustic old world feel mixed with modern, the China Imperial room decorated with bamboo and a tapas bar which is spacious, chic and modern.  Check it out next time you're in the Swiss capital, Bern.

Note: This article was originally published in March 2013.  Today, La Pizzeria has been rebranded as Giuseppe's Bella Pizza.