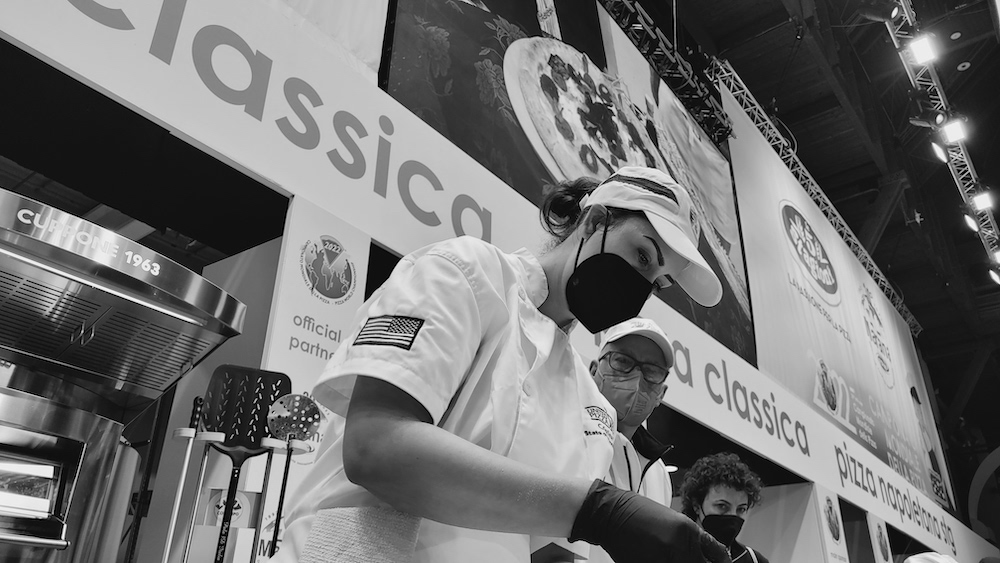 With a squad of 12 eager pizzaioli, the USPT tested its pizza prowess in categories including Pizza Classica, Pizza in Teglia, Pizza in Pala, Pizza Senza Glutine (Gluten-Free), Pizza a Due (pizza made by two pizzaioli), and STG, as well as Largest Dough Stretch, Fastest Pie Maker and the visually exhilarating Freestyle Acrobatics.

A pizza power couple if there ever was one, the Smiths claimed the Best of the United States and Best of Mexico awards respectively. Lars won the 2019 Galbani Cup but was delayed in his victory tour and right to defend his title internationally due to COVID-19. Now that the world is opening back up and competitions have begun anew, he burst out of the gate, taking home 5th place in the world out of more than 700 total pizza competitors for his Pizza in Pala entry, the Zucchine e Burrata. It features a direct fermentation dough made with 80% hydration, a strong 0 flour and fermented for a total of 72 hours (48 bulk and 24 balled). It was topped with salted zucchini, burrata,  lemon zest, mint, sea salt and olive oil. This rectangular piece of pizza art embodied all the characteristics of a great pizza on the peel: light, airy, well-constructed, not too busy, and most importantly, delicious!

Lars said he was “absolutely stunned” by his top 5 finish. “I knew I made a great pizza, but it is such a tough group of competitors that I would have been excited being in the top 20. It was an unforgettable experience, and I can’t wait to do it again next year.”

The WPC was Cristina’s first international competition abroad, and she made the most of it. She took home the highest score among competitors from both the U.S. and Mexico for her Pizza Classica entry, the Tonno e Cipolla. It features a direct fermentation dough made at 65% hydration and fermented for 72 hours, then topped with tomato sauce, Italian oregano, fresh mozzarella, tuna, red spring onions, capers, arugula and lemon juice.

Rounding out the culinary honors for the USPT was Team Captain Michael LaMarca of Master Pizza in Cleveland, Ohio. LaMarca achieved the highest score from the U.S. for his Detroit-style Pizza in Teglia, called The Detroit, Parma Style! This fluffy pillow of dough held upon its crown a sweet fig jam base, fried pork guanciale, a mozzarella/scamorza cheese blend, arugula, goat cheese, prosciutto and balsamic pearls of perfection.

Meanwhile, USPT dough-spinning acrobats Jamie Culliton and McKenna Carney, both of The Nona Slice House in Safety Harbor, Florida, competed in the fan favorite Freestyle Acrobatics, placing in the top 5 and top 10 of the world respectively. Culliton is a past World Pizza Championship overall winner in the acrobatics category. Dave Sommers, owner of Mad Mushroom in West Lafayette, Indiana, left the competition floor with the highest scores for the U.S. in both Fastest and Largest Dough Stretches.