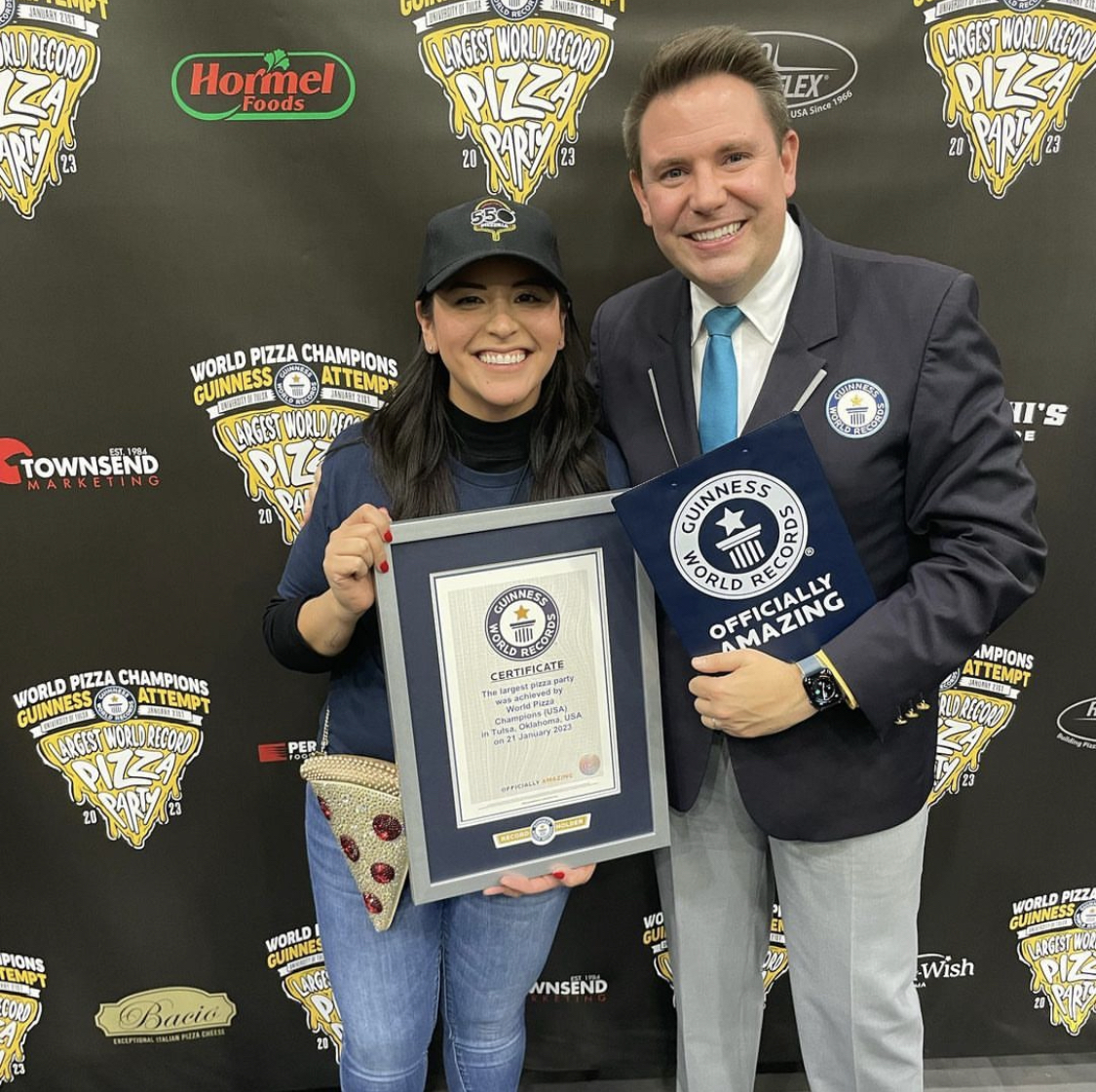 Janet Zapata, owner of 550 Pizzeria in Laredo, Texas, shows off her certificate with Michael Empric of Guinness World Records.

The Italians know pizza better than anyone, but leave it to Americans to throw the world’s largest pizza party.

Andolini’s Pizzeria, headquartered in Tulsa, Oklahoma, teamed up with the University of Tulsa to set a new Guinness World Record on Saturday, January 21, drawing 3,357 people to the university’s Donald W. Reynolds Center prior to a Golden Hurricane basketball game against Tulane University. The effort more than tripled the previous record of 1,046 held by a group of Italians in Rome.

“It was my dumb idea, yeah,” Andolini’s co-owner Mike Bausch told KTUL. “I thought, ‘Let’s go for a Guinness World Record. This should be pretty easy.’ It’s not.”

It took about eight months to plan the party, and Andolini’s five restaurants worked to make more than 1,000 fresh pies just two hours before the event.

Not only did locals from Tulsa and the surrounding area pack in the stadium at $5 a ticket, many notable pizza professionals from other pizzerias around the country showed up as well. They included past PMQ cover subjects like Janet Zapata of 550 Pizzeria in Laredo, Texas; Michael Androw of E&D Pizza Company in Avon, Connecticut; Carmine Testa of Carmine’s Pizza Factory and Jersey Pizza Boys in New Jersey; and Tara Hattan of Zasa’s Pizza & Wings in Tulsa.

To be counted under the rules set by Guinness World Records, participants had to eat two standard-size slices of pizza and drink a small bottle of water in 15 minutes. Anyone who didn’t finish their portion was excluded from the total attendance count.

Related: Pizza Hut Outpizzas Itself With the World’s Largest Pizza

Michael Empric, a Guinness adjudicator, ran the show and announced the final total, eliciting whoops and cheers from the organizers and attendees alike. Every participant received a certificate celebrating their role in the record-breaking event.

“Record attempts happen all the time,” Empric told KTUL. “This record was just attempted in L.A. a few days ago and was unsuccessful.”

The event also raised more than $40,000 for the Make-A-Wish Foundation.

The previous record for the world’s largest pizza party was set by Istituto della Pizza and Marco Di Pietro in Rome, Italy, on September 8, 2019. That event is still currently listed on the Guinness World Records website.

Bausch told KTUL that the attempt alone was worth all the hard work. “I think the beauty of life is doing things to do them and for the joy of accomplishment,” he said.